XPhyto Therapeutics Corp (CSE:XPHY) has seen a significant amount of dollar weighted volume of late, relative to its average, as the company works a narrative that has them becoming a significant piece of the developing German medical cannabis market.

Nearly half of the stock on this company’s cap table is $0.125 paper that figures to hit the thinly traded CSE stock like a garbage slide the first time one of its holders needs cash bad enough to pound away at the bid, so XPHY’s prospects are about as good as the number of financial illiterates that the promotion can suck into dreaming on being paper drug barons.

Ordinarily Fundamental Hype wouldn’t bother with this type of trash, but it gives us a chance to examine the import and export markets, so let’s get started. 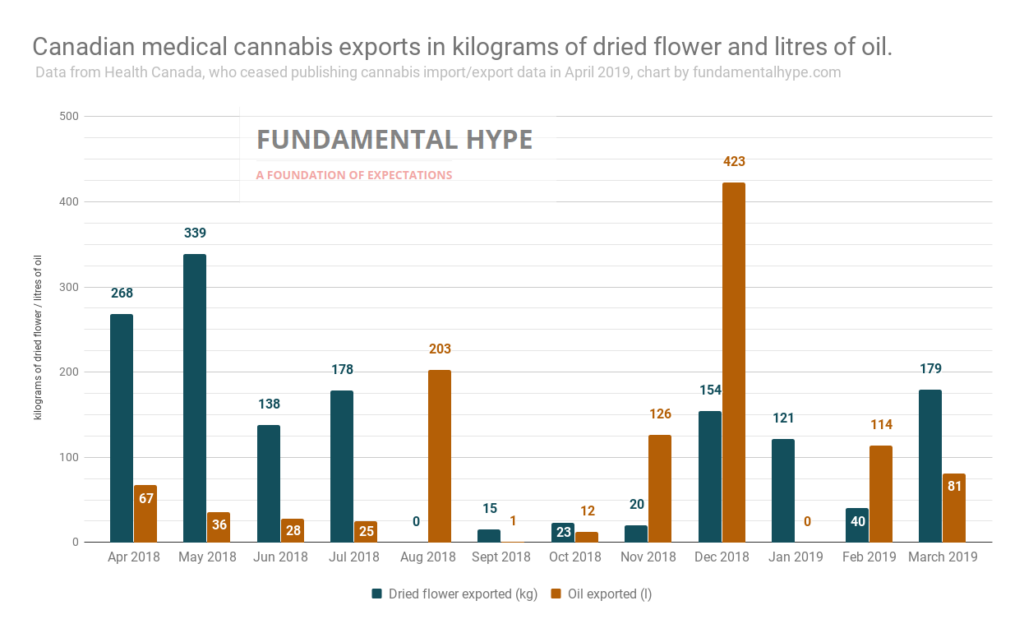 The market for exported Canadian medical cannabis is something that the major licensed producers have been developing since the cannabis market peak, and continue to develop as their equities sink further into a trough. Health Canada made it difficult for us to keep tabs on it back in May when they stopped publishing the export data. Presumably, the agency is still tracking the data, because the HC data page says that April, May and June 2019 import and export data is “To be published at a later date…” 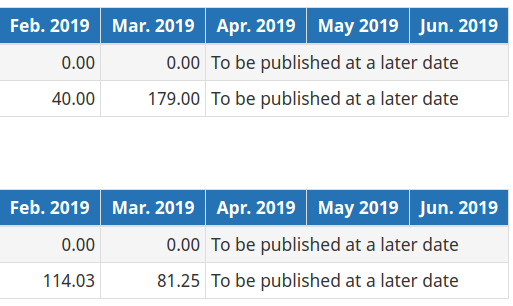 There aren’t any patterns to be gleaned here, and each reported month is a small portion of the total sales (the December 2018 peak was 2% of December’s total dried flower sales). An optimist could consider that evidence of an undeveloped market. The German market for medical cannabis, especially, is seen to be opening up steadily. The laws have only recently allowed for medical use with a prescription. The market is supplied by import; MJ Biz Daily has the country importing 2,500 kgs in the first half of 2019. The larger LPs are fond of touting the growth potentials overseas, especially in Europe, and all have their own ways of going about it.

Aurora Cannabis (TSX:ACB)(NASDAQ:ACB) shipped $25 million worth of medical marijuana internationally in the quarter ending September of 2019, and are due to report for the December 2019 quarter tomorrow. Aurora doesn’t break out the weight they shipped, but has said that it goes at a premium. Aurora’s medical cannabis as a whole (domestic and international) sold for an average of $8/g in the September quarter. Rec grade cannabis went for $5.28/g, bulk for $3.46/g.

The company has a two year contract to supply a total of 400 kgs of medical bud to Italy through the Italian Ministry of Defense that started in July of 2019. The contract is predicated on the cannabis being produced in Auora’s EU – GMP certified facilities.

Canopy Growth Corp (TSX:WEED)(NYSE:CGC) has their own manufacturer and distributor in Germany called C3 to go along with all of the export licenses in their Colombian operation, Procaps S.A.S., who are GMP certified by the US Food and Drug Administration. Canopy sold $18 million worth of product to the international market in the September 2019 quarter, are scheduled to report their December quarter’s results this coming Friday, February 14th.

Aphria (TSX:APHA)(NASDAQ:APHA) doesn’t break out international sales, but it’s most certainly in their plans. The company owns a German pharmaceutical distribution business called CC Pharma that did $86 million in sales in the quarter ending November; more than twice the $39 million APHA got out of the cannabis operations in the same period. The plan is to use CC Pharma to give them access to the German market, then expand it to the rest of Europe and, to that end, Aphria gets very loud about their cannabis production facilities being GMP certified. They attained a third party independent GMP certification done by SGS labs in March of 2018, and were very proud to announce an official EU GMP certification of Aphria One on January 22nd of 2020, which ostensibly allows them to ship cannabis to CC Pharma for packaging and distribution.

But not all companies with export ambitions are brand names or are even headquartered in Canada. Colombia-based Pharmacielo (TSX.V:PCLO) holds cultivation and export licenses in Colombia, and is branching into cannabis exports from their main telemedicine business. They sold their first $60,000 worth of cannabis ever in the three months ending September, 2019 at a gross loss of $6,000, but hope to be able to do a lot better following a partnership with the star of our show, XPhyto Therapeutics Corp.

An XPHY presser January 27th outlined a partnership with Pharmacielo from whom they hope to buy a full range of extract products totalling 30,000 kg over three years for import into Germany.

XPHY was very pleased to be working with Pharmacielo, noting that the Colombian company’s qualifications include “… global Good Agricultural Practice and ISO 9001:2015 certifications that are difficult for large-scale producers to achieve.”

The particular relevance of the ISO certification is unclear. Pharmacielo says they operate their facilities at GMP standards, but aren’t yet GMP certified. In March 2019, the company was expecting to get a certificate for their Research and Technology Centre “in the coming months.”

In PCLO’s own announcement about their new strategic partnership with XPhyto Therapeutics, Pharmacielo seemed very excited about partnering with a company who had the GMP Certification to get their product into the German medical market, stating explicitly in the opening paragraph that the contract was to:

… supply medicinal-quality cannabis extract oils and isolates, including those containing THC, to XPhyto for analysis, further processing, product development and manufacturing at its European Union Good Manufacturing Practice- certified (“EU GMP”) facility in Biberach in the state of Baden-Württemberg, and thereafter for sale into the German market.

But XPHY’s wording in their press release was much less explicit. It contained the aforementioned praise for Pharmacielo’s ISO 9001:2015 certification, but only mentioned EU GMP lab certification in the About the Company footer. The company’s latest MD&A (period ending September, 2019) mentions GMP certification in the context of something a “major international grower” that they were in negotiations with for a German export contract is pursuing (no telling if that company is PCLO), and in the context of their German subsidiary Vektor Pharma TF GmbH.

XPHY did a cash-and-stock deal for Vektor September 17th, 2019 which, considering the time and trouble Aphria went through to have their facility EU GMP certified, seemed like a bargain. XPHY got Vector for €350,000 cash and another €350,000 in convertible debs, plus 200,000 shares and some warrants, so a good market could see them buying it mostly on the strength of their public equity. Almost too good to be true.

A search of EudraGMDP, the EU’s public registry of GMP certifications for pharma operations, did turn up a certificate for Vektor Pharma TF GmbH. It was issued March 19th, 2018, pursuant to an inspection conducted January 11, 2018, and states clearly that the certification is “Only for the manufacturing of Human Invesitgational Medicinal Products for phase I, II, III.” It does not list any specific drugs. 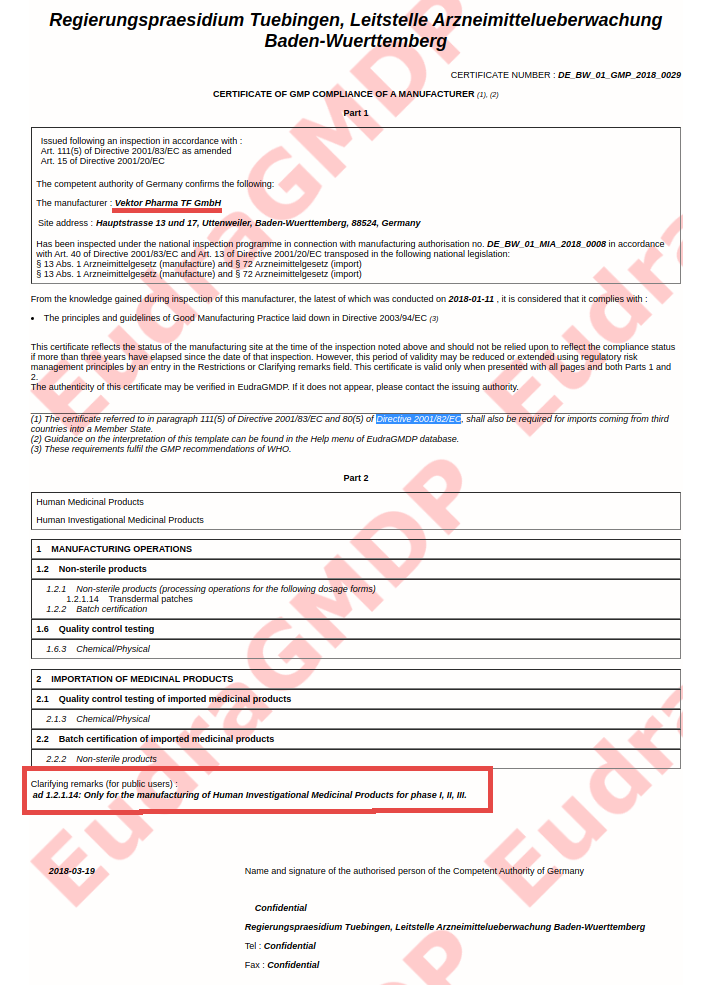 This certificate is consistent with XPHY’s treatment of their certification as a “lab” certification, but doesn’t tell us just how far away they are from being able to handle 30,000 kg of Pharmacielo product and ship it to the German market.

Facilities certified to manufacture drugs for sale to the public are given certificates noting the substances subject to inspection. This one, given to a Bayer AG facility in Bergkamen, was issued August 10th, 2019. 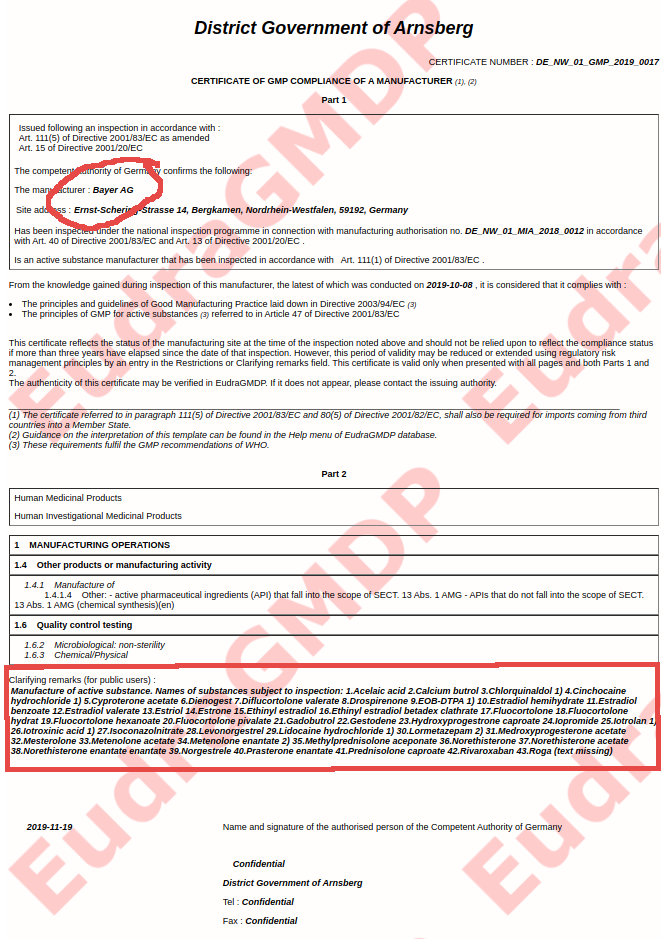 Packagers and distributors like CC Pharma carry certifications for that explicit activity. Presumably, the cannabis being packaged has to have been grown and processed in a certified facility, which is why Aphria went to all that trouble. 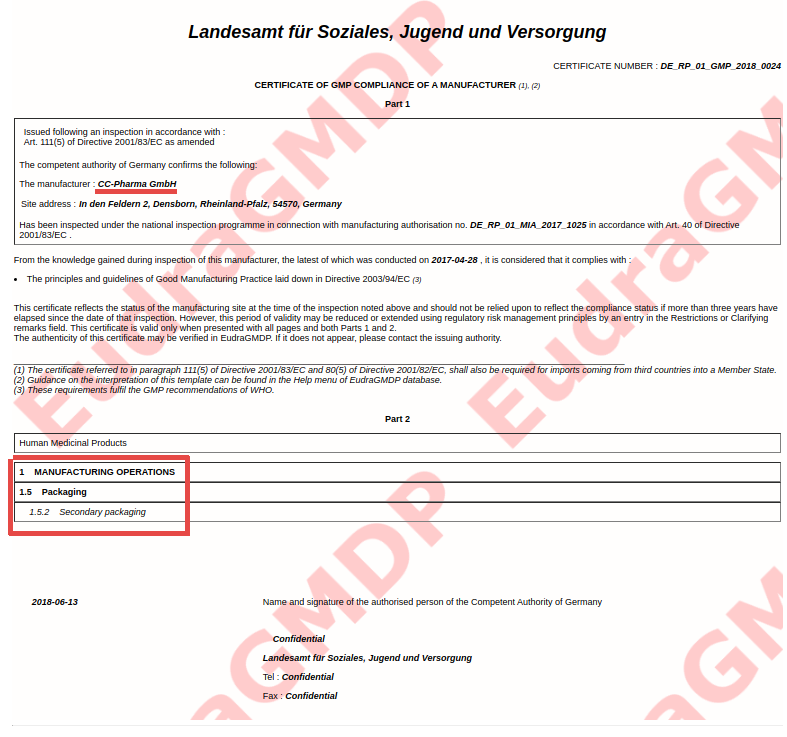 Technically speaking, XPhyto Therapeutics hasn’t told the public that they have an EU GMP certified manufacturing facility, just a lab. We wonder if Pharmacielo understood the difference when they were doing the deal.

A private placement that closed Jan 31, 2020 staked XPhyto $2 million (less fees and warrants) towards setting up viable import and distribution infrastructure via convertible debentures that pay 8% and convert at $2.50 per share. $500,000 of it was Pharmacielo’s money. XPHY burnt through a net $1.1 million in the three months ending September 2019 on a cash basis.