That production amounted to a 359% growth in unit sales, more than double the unit sales growth of its nearest competitor Aurora Cannabis (TSX:ACB)(NYSE:ACB) (161% growth in unit sales) and was good enough for $83 million in revenue, establishing it as a sector leader. And while a $21B market cap may seem absurd for a company with $83 million in sales and ($0.10)/share in losses, the upward pressure created in this vacuum of relatively few pot deals in a high-demand environment draws companies upwards by size.

It was only last summer that this cannabis sector was being treated like the flavor of last month. Canopy CEO Bruce Linton went on BNN in a Tweed branded T-shirt acting all defensive towards host questions about how the in-process rec laws were shaping up. Canopy took a dive and the rest of the sector went right along with it. Fewer than 24 hours later, Linton’s flippancy and attitude gained a whole lot of context when the company announced a $5B investment by US Liquor giant Constellation Brands (NYSE:STZ), putting Canopy right back on track and taking the sector with it. Because as goes Canopy, so goes the marijuana world. 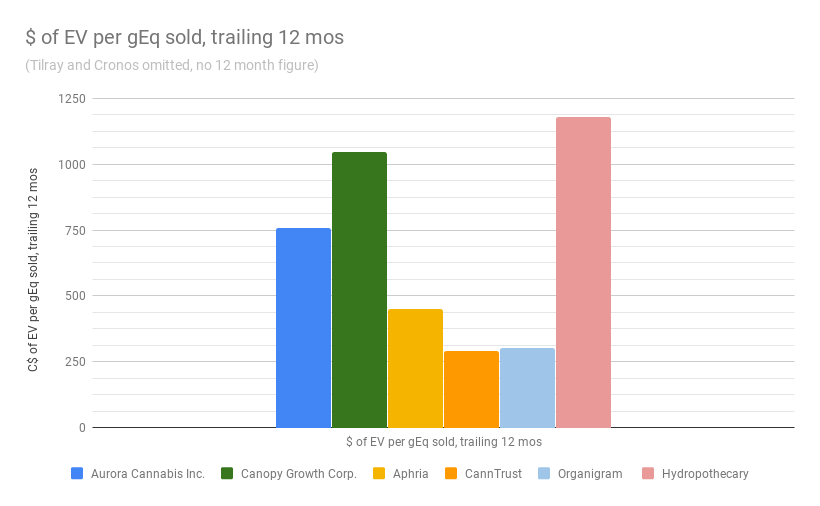 It’s sometimes hard for those of us who watched this sector grow from humble beginnings into a $60B+ growth giant that dominates the business press to remember just how small it actually is, relatively speaking. These companies are enormous in relation to their sales, and the largest ones dwarf the smallest ones, but Constellation Brands is a US$33 billion cap on its own. The liquor, tobacco, consumer goods and pharmaceutical companies who conceivably want in on a developed cannabis sector, and the banking and finance sector who facilitate them, are each bigger than the sector itself by an order of magnitude.

Anything that big, whose success and failure is defined by whether or not they can make money, has to first be concerned with not losing it. Canopy ended up with a $5B capital injection BECAUSE they were the biggest, and are likely to stay that way. Big companies don’t have the time or patience for darkhorse up-and-comers. They’re all growth stories. There’s no sense over-complicating this. 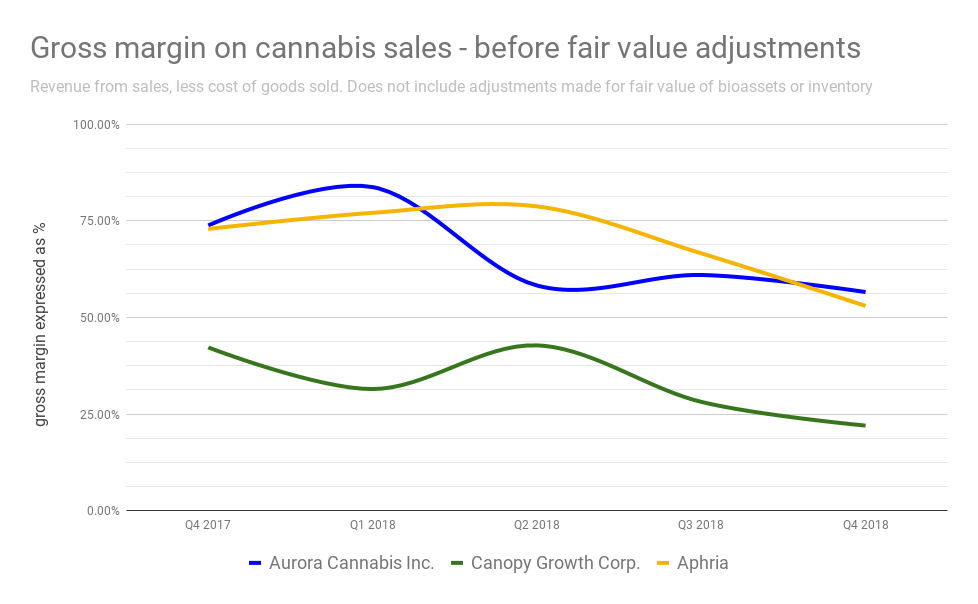 The curse of starting at the front is that staying there requires constant, on-the-fly adjustments. Canopy is still scaling up at most facilities, including some of the bigger ones. Lower dollar from the provincial government wholesale contracts are squeezing them, and it’s driving margins down sector-wide. Recall that Aurora made a show on their call about not being interested in the rec market, because higher revenues from medical (and especially international medical) would mean higher margin. Aphria Inc. (TSX:APHA)(NYSE:APHA) explained their margin decline as scaling costs as well.

The juicy top line is ultimately the metric that makes the marijuana sector attractive to capital, and they’ll put up with a thinner one through a scaling phase. But keeping it juicy is a sure way to help everyone look past the necessary underwater condition on the bottom line. It’s vulnerable to downward price pressure that could conceivably happen if there was a massive amount of inventory staged and ready to hit the market, which…

Canopy’s relatively detailed reporting in previous quarters let us flesh out our theory that this supply shortage is actually more of a quality shortage. They stopped giving us the split between consumer grade flower and extract grade flower in April, making us question whether they’re producing much high test at all. This quarter, they got rid of their inventory count all together, consolidated the inventory value lines that had previously shown us the oil/bud/cap split in finished goods, and did us the same way on the work-in-process value lines while they were at it.

When there’s less info available, less is known, and speculation fills the vacuum, so here goes:

Extract grade dried flower can’t reasonably be counted among finished goods. It’s finished once it’s become an oil or extract. If much of the inventory previously counted as dry flower in finished goods has since been deemed to be extract grade, that flower would end up having to be re-classified as work-in-process until it is processed and becomes whatever it is intended to be sold as. If that type of re-classification of existing inventory is in fact being hidden in a reporting change, it would call into question the Canopy machine’s ability to create consumer grade flower in volumes that satisfy the Canadian consumer market.

The drumbeat of excitement about edibles and extracts being legalized for sale to consumers is making a lot of sense in the context of Canopy maybe not being able to hit the quality mark. Canopy paid $100M for an extracts facility in Saskatchewan (POS Holdings) that isn’t open yet. Aurora’s apparent champing at the bit to get the extract facility at their partner and portfolio component Radient Technologies (TSX.V:RTI) moving suggests that the companies aren’t going to have any trouble supplying them with feed.

Our inclination is to make a prediction that Canopy might run into supply trouble next quarter, but there just isn’t enough here to say. Maybe they wanted it that way, maybe they’re getting out ahead of it. In any event; you can’t count them out. A $4.1 billion war chest can solve a lot of problems.

If it’s on reddit, then it must be true.

Some of the Canopy-related product intel coming out of the heads over at r/recpics hasn’t made Canopy look all that great.

In the interest of fairness, much of the bud that made it to consumers looks fine, and as we’re fond of reminding people “the plural of anecdote is not data.” Cannabis reviewer Pancake Nap did a deep dive on Tweed’s plain package sativa last month, and came away unimpressed but optimistic. There is some slack being cut by consumers here. They’re willing to give Canopy a chance to get better.

We’ve seen two high potential value offerings failed by their inclusion of seeds. Fair enough, we’ve seen a lot of that in these reviews. I’m actually not sure how to feel about it, but I want to leave this with an encouraging tone, because there was a lot done right here as well. So, producers offering decent quality cannabis at a value price, please bring us more. This offering was good, yet not nearly good enough, and I look forward to see what’s available on the next round.

Ultimately, whether the heads can put up with this stuff or are so over it, might not matter. It’s possible that this stuff is plain good enough for the average bear, and will sell in volume if the company is able to create it. The chart that matters the most right now, the one the most likely to get the attention of the larger entities who make and break this cannabis equities market (and their capital) appears below. 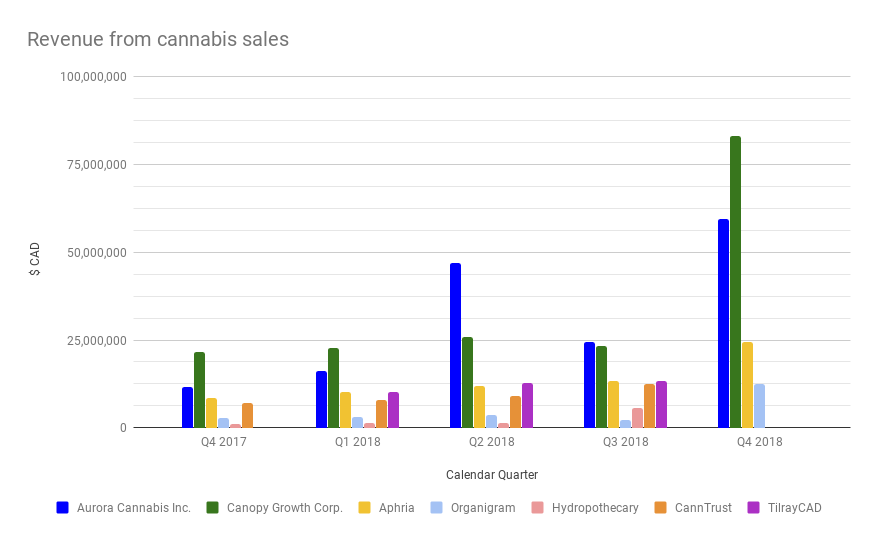