In Public Float Pt.1: The anatomy of IPOs, we outlined the most important guiding principle to consider when evaluating public offerings:

No sex in the champagne room

No matter what they tell you about the reason the company is doing an IPO, the real reason is that the founders want to cash out.

It’s certainly possible that the business being listed, newly cashed up, is ready to execute its next stage of growth in a liquid market, that they’ll convert on the opportunity that comes with the attention by showing the street that they are worth the risk. It’s also possible that the stripper really DOES have a crush on you, but that doesn’t change the facts on the ground.

If, in physics terms, the “cheap” (priced below the IPO price) stock that is burning a hole in the founders & early rounders’ pockets is the mass that needs to be moved, the pitch that the sell-side gives is the work that is being done to move it, and the sentiment of the market is the friction that it’s up against.

The pitch matters the most at the beginning. It’s either going to get the buying to move a stock and set a narrative that can be carried long term, or it’s going to fail to get the interest of the market, and leave a bad taste that’s hard to wash away. But evaluating a pitch is subjective. The only part we can really count is the float.

Marijuana enterprise software company MJ Freeway went public through the US version of an RTO, when the shareholders of blank-check company Mtech (NASDAQ:MTEC) approved a plan of arrangement to take them over this past Friday June 14th. MTEC traded sideways around $10.15, with little to no liquidity for about a year, having been put together for the expressed purpose of taking a marijuana-related technology company public. It took a year of diligence and deal-making to identify MJ Freeway as the best fit and to negotiate terms that the shellco’s shareholders approved at a special meeting June 14th. 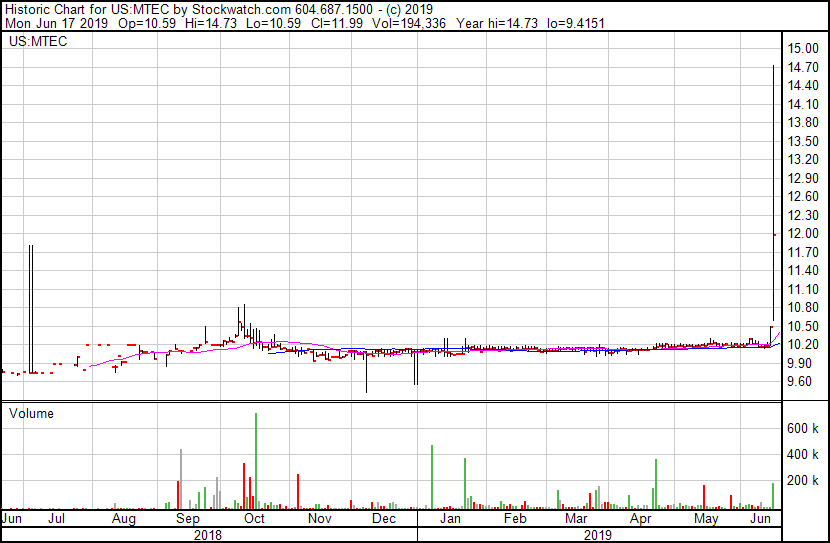 Following a last-minute 215,000 share top-off offering ahead of the Friday vote, MTech, now Akerna (NASDAQ:KERN), had a total outstanding share count of 14.75 million shares when it went public Monday. Of that stock, MJ Freeway shareholders owned 48%, the deal’s financiers own 12%, leaving the simple float at 40% of the outstanding shares: about 6 million shares. 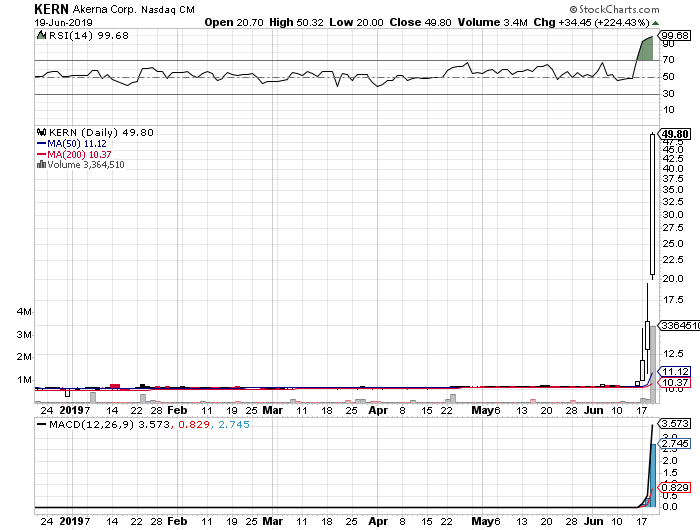 That stock owned by the financiers includes 1.4 million shares that costs its owners $0.017/share, and only 10% of the 2.4 million shares of the early blank check founders’ stock are locked up. One would expect that stock to come out right away. It’s free money.

Half of the 7.8 million shares owned by the MJ Freeway founders is locked up for one year following the date of the listing, except for in the case of a merger. The other half is locked up for one year, or until it trades at or above $12.50 for 20 days in any 30 day trading period. As I write this, KERN is trading at $25.83 up $10.48, having moved 1.2 million shares so far on the second day of its public listing, so it’s well on its way.

That leaves an aproximate all-in tiny and very measurable float of about six million shares that the market forces blew up the price incline like it was nothing. Let’s have a look at the pitch that did the work.

The company is a software-as-a-service company that makes systems used to track marijuana from “seed-to-sale” in jurisdictions where it’s legal. Software of its kind is indispensable to the compliance processes of legal cultivators, who are responsible for accounting for every plant and every gram of product. The company supplies a similar software product to governments of jurisdictions where medical and recreational marijuana is legal, who are necessarily obsessed with making sure that the product they’ve licensed companies to grow doesn’t find its way onto the black market that they’re trying their best to displace. Through API integrations to various distribution and point of sale systems, MJF has access to enough data and talent to sell itself as a consultant to both license applicants trying to understand the landscape of various jurisdictions, and investors looking to use live trends to gain an edge.

The Denver-based company is going to be asking the market to believe in their ongoing participation in an expanding marijuana market, and in the further expansion of the market itself. Freeway will be trying to convince the market that, in the near term, they will be able to gain a purchase in the states where marijuana has been legalized, most of which are still a long way from license saturation, and are in fact still seeing applicants building out their operations. The medium term case is that they’ll be able to continue to build out their consulting business, guiding licensees and investors through a notional expansion of the legal US marijuana landscape, which would make the long term case one that the company can be the purveyor of infrastructure to a trillion dollar industry.

The goal here is to make MJ Freeway feel like a trend-setting company that’s up in the mix in the American and international cannabis arenas that matter. If the publicists they’ve hired for visibility are good (and lucky), they’ll get Freeway’s well-earned data insights some product placement on financial cable networks, who are constantly thirsty for marijuana content. CNBC seems like it spends half the day trying to figure out how the marijuana business works out loud on television, then cutting to Tim Seymour so that he can articulate a series of charts with total confidence while fighting uphill against bong-hit sound-effects, and the rest of the set can nod as if it means something. That isn’t meant to be a shot at Seymour or even at CNBC. He’s doing his best to make this sector make sense, and one can assume the network is trying to give their audience what they want. There’s just not a lot of actionable information being fed into this vacuum, so it ends up trading based on its own movements; an aimless herd ready for any kind of leader. Easy pickings for the people who understand how to manipulate it.

“In a frictionless environment,”

When we wrote this up for our research clients a week ago, we noted that the stock would have to start to look like it’s out of its own league before it was really taken seriously, and we’re well on the way there. The go-public price was 5.4x enterprise value to sales ratio, giving KERN a market cap of $145M. The 6 million share float started with a total value of $60 million, and took off today to an implied value of about $165M $362M $725M .

A $1M position represented 1.4% of the total float at the opening, but is now only a tiny fraction. The shares traded today was about one fifth of the total outstanding and half of the float. The question now becomes whether or not the volume can keep up. There is clearly interest from all sizes of institutions, so look for KERN to split in the near future to make for a tradeable float.

This early run was born of a pitch so compelling that other, greater fools believing it at higher price is easy to imagine, and it comes with a very real potential to be amplified in earned media. If the volume can be convinced to turn up, it should take the price for another ride. Any stock that trades half its float in the first two days to go on a 400% run is getting the right kind of attention.

The earliest various founders’ stock (about 4 million shares) can unlock is the date that KERN trades at or above $18 for 20 out of 30 consecutive trading days. If it can sustain that kind of price, look for KERN to raise more money right away in a secondary offering. Markets have a much quicker metabolism than governments, and the company would be wise to get while the getting’s good. 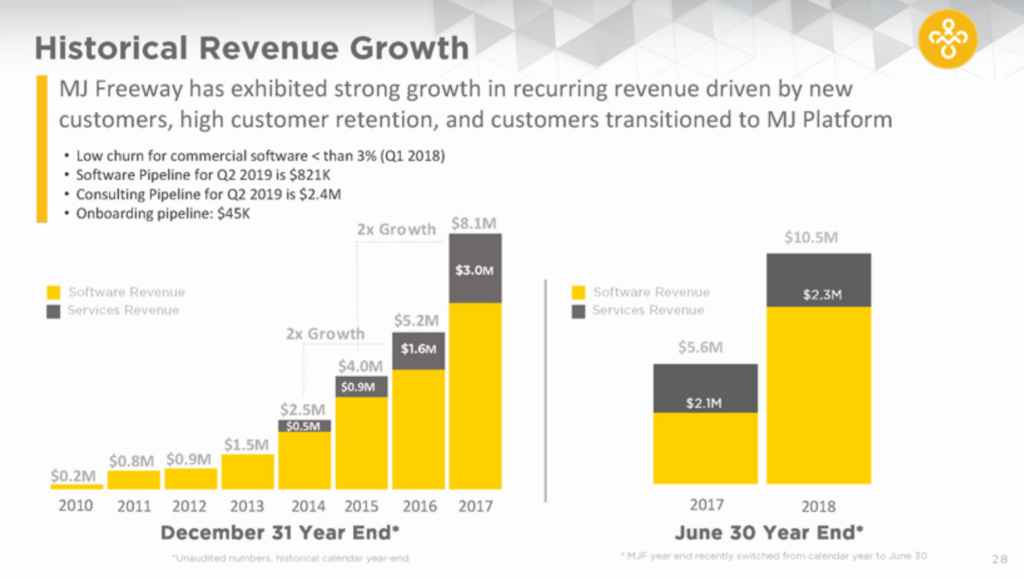 KERN is pitching the street on a business at the same stage of scaling as BYND, UBER and PINS; asking the market to believe in their growth, and there’s no mistake that the market WANTS to believe.

Investors have shown great interest in backing the CSE offerings of the growers the company counts as clients, and as more and more governments take the shackles off of the weed business, Freeway can make clients out of them, too. It can’t be understated that this is the first real sniff of the US weed business that the US markets have really got a piece of.

KERN earned $10M in revenue last year, so this puts them at a price to sales ration of about 66:1. The average price to sales multiple for mature software companies is somewhere around 6:1. Salesforce’s price to sales multiple osculates between 8 and 10. But those are all companies going after established markets, often eating each others’ lunch. Try getting someone to take a call about a company that publishes a CRM product or some kind of cloud software. This is the closest thing the NASDAQ has to direct access to proper US marijuana equities. 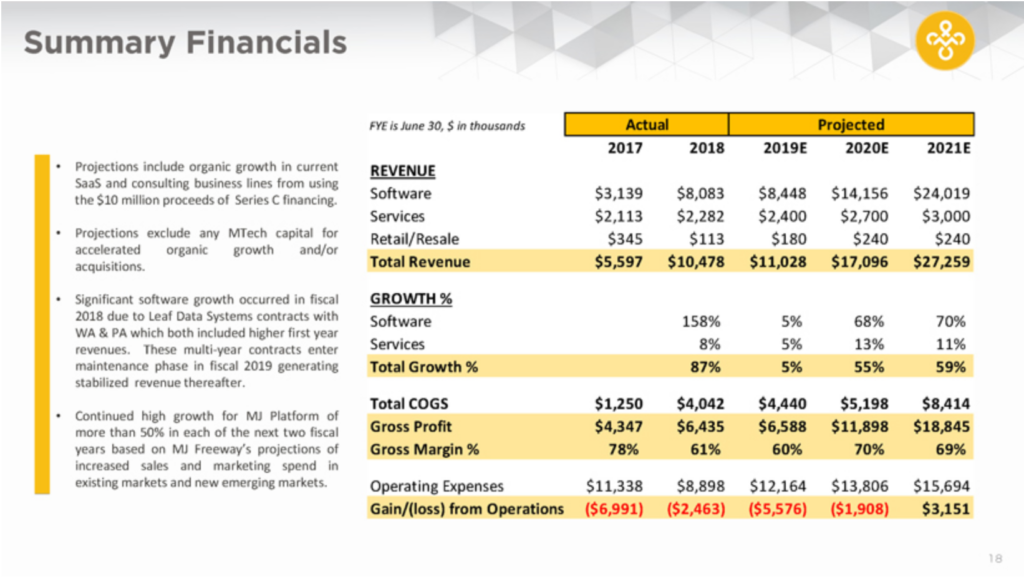 MJ Freeway Akerna isn’t without competition. Seed to sale software startups are fairly common, but hard to evaluate. Ample Organics is the other brand name, and there are a host of others at varying sizes. None of them are yet public, but one might infer that Kern’s early success has them thinking about it.

There are also legitimate questions to be asked about the fidelity of the product. Multiple data breaches over the past few months, including government level breaches in Washington State and Pennsylvania, have to be a cause for concern. So far, though, neither state has given them the boot and we’re not seeing any real-world fallout from these hacks. If we never do, and there isn’t another one, it’ll fade away. If it happens again, it could hurt sales at a crucial time that they’re trying to gain market share.

The MJ Freeway deck that Akerna used for their listing is here.