It was a wild Tuesday in the MSO sphere, as the US Food and Drug Administration sent a letter to Curaleaf (CSE:CURA) letting them know that they can’t just go slinging CBD products off of a digital snake oil wagon willy-nilly.

The US Federal regulator in charge of what can and can’t be sold as medicine singled out CURA’s “CBD Lotion,” “CBD Pain Relief Patch,” “CBD tincture,” and “CBD Disposable Vape Pen,” products as “unapproved new drugs sold in violation of sections 505(a) and 301(d) of the Federal Food, Drug, and Cosmetic Act (the FD&C Act), 21 U.S.C. 355(a) and 331(d),” which sounds pretty serious.

Telegraphing an opinion that their objections are to a pattern of behavior, rather than a few isolated incidents, the people down at the FDA continued on with a classic “FURTHERMORE!” notifying CURA that those products are “misbranded drugs,” and, while they’re at it, they consider the pet food CURA is selling an animal drug, and they haven’t bothered to get that approved, either.

The letter covers a lot of ground, and kind of bowls the reader over with a high-detail list of infractions that must have taken a bunch of guys in grey suits a week to itemize. It isn’t clear whether Curaleaf’s alleged infractions can be remedied by a wide re-write of the literature or if these things are going to have to come off the market, but the technical objections appear to come down to CBD products being marketed and sold as medicine. The agency cites a laundry list of instances from Curaleaf’s sophisticated content marketing machine that either explicitly or implicitly market CURA’s CBD-based products for the treatment of ADHD, anxiety, pain relief, Alzheimer’s, Parkinson’s disease, cancer, schizophrenia, fibromyalgia, eating disorders and PTSD.

The FDA, an agency responsible for ensuring the safety and effectiveness of medicines “introduced for sale into interstate commerce,” frown on that sort of thing.

The letter goes on to tell Curaleaf not to even bother with the old “dietary supplement,” chestnut, because the FDA made sure to explicitly close that loophole for CBD products, having already heard it from every anti-aging product anyone’s ever sold to a sucker. Besides: no product meant to be applied topically can reasonably claim to be a dietary supplement. 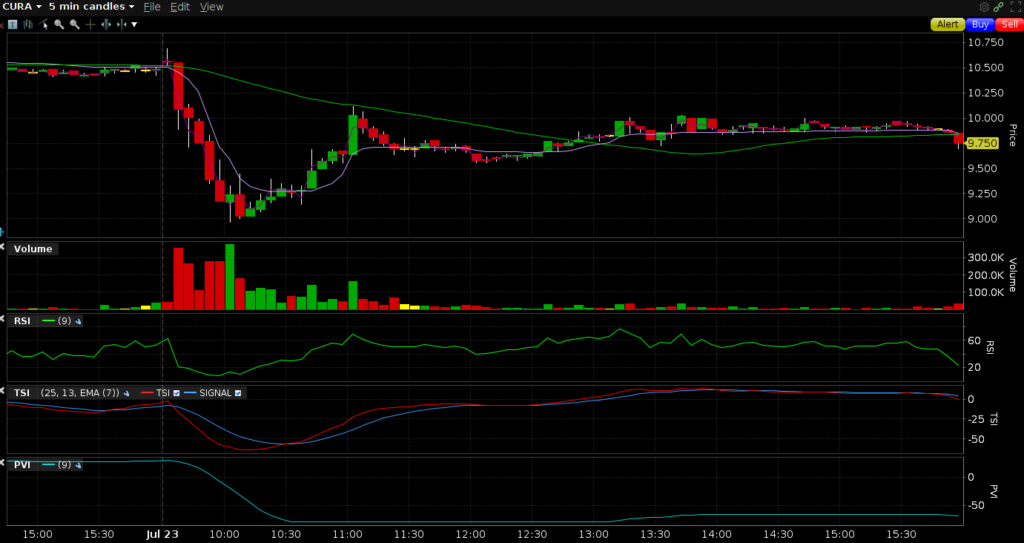 The clear, amplified warning shot caused CURA to dive from $10.89 to $8.97 in the first 35 minutes of trading before recovering to close at $9.75. The company released a statement to tell everyone that they would be replying to the FDA within the required 15 working days, and reminding shareholders that there are still lots of FDA violations that the company has NOT been accused of.

Investor uncertainty about whether or not the FDA is satisfied with a public warning to the hyper aggressive “Cure-all-leaf,” and what type of response will follow caused a swoon in any and all companies who derive revenue from the sale of CBD. We took some time to assess the product line and sales game of the other CBD-selling MSOs, with an eye on how the market reacted on the day this letter broke.

Charlotte’s Web (CSE:CWEB), which derives all of its revenue from CBD sales – much of it through nation-wide e-retail – lost 5% on the day, seeing strong buying after the initial dip and as sideways pattern all day. There’s support here, and the fact that it mirrored CURA indicates that investors are applying this letter to CBD co’s as a group. Whenever the market does that, it pays to get a bit more granular and see what pops out.

When read immediately after reading the FDA’s letter to Curaleaf, the Charlotte’s Web catalog‘s avoidance of any sort of claim of health benefit or directions to use any of their products as any kind of medicine is conspicuous.

CWEB’s content marketing uses the sort of personal growth / mindfulness themes that one would assume their target demographic likes to read about to draw people who presumably already know what CBD is and what they intend to use it for. When they discuss their product and how it’s used, it’s never explicitly cast as a treatment. A CBD product might be something that people “use to help them fall asleep,” but never something they “use to treat insomnia.” It’s a masterstroke of commercial copy-writing undertaken with purpose by seasoned professionals; like aggressive strikers who know how to maintain a strong attack position without ever going offside.

That approach was good for $15 million in gross last quarter on $21 million in sales at Charlotte’s Web: a 72% margin, that put $2.3 million on the bottom line.

For comparison, CURA (whose primary business is the sale of cannabis) grossed $18 million on $35 million in sales, a 51% margin, to lose $10 million, but it’s unclear how much of that revenue came from CBD sales. Curaleaf does cite “[an increase in] the level of support staff necessary to run the expanded operations and costs associated with marketing CBD products nationally,” as a reason for increased operating expenses in the period.

Faded darling of the twitter retail crowd iAnthus Holdings (CSE:IAN) may have been hit the hardest by today’s shift in the market’s CBD paradigm. The company just finished a $12.8 million cash and stock deal for CBD For Life, a company previously owned by IAN director Beth Stavola. CBD4L’s products are distributed at retail shops nationwide and it sells CBD products directly to consumers through their e-retail platform, while leaning heavily on the cannabinoids’ health benefits.

At press time, cbdforlife.us‘ blog was running wholesale syndication of third party content that touted CBD as a “miracle” product that treated “depression, pain and more,” the “more” including most of the psychological and physical ailments that the FDA took exception with in their letter to Curaleaf. The syndicated content comes from Psychcentral, MSNBC, Wander Woman, etc., often cites original publications but not authors, and reads like the disjointed product of some sort of aggregation service. There is no continuity or character to speak of and it would surprise us to learn that it is at all effective.

Since the CBD4Life purchase was only finalized in June, it’s unclear what portion of IAN’s business it represents. Neither the release announcing the deal nor the release announcing its closing mentioned anything about CBD For Life’s top or bottom lines, or their unit sales, just that CBD sales in the whole of the US were estimated at $600 million to $2 billion in 2018. IAN paid $10.4M for CBD For Life in stock, and $2.4 million in cash to settle outstanding debts.

Worried about my steadily backsliding investment in Florida cannabis market leader Trulieve (CSE:TRUL), I checked the TRUL catalog to find a few CBD tinctures and topicals, none of which claim health benefits. The software won’t allow for the placement of an order to be delivered outside of Florida. Content marketing isn’t something they’re developing, and neither is national CBD sales.

Their fellow Florida operator Liberty Health Sciences (CSE:LHS) does sell a transdermal patch that promises “8-12 hours of unsurpassed systemic relief,” under their “Mary’s Medicinals” brand, and the software didn’t stop me when I gave it an Austin, TX address.

Mary’s Medicinals’ product literature does talk about the use of CBD and CBN for pain relief (and insomnia, bone cell growth, bacterial infections, inflammation, convulsions and lack of appetite… but that’s all).

JFK Jr. told us on the Q Anon forum the other day that this is part of the FDA’s crusade to keep CBD from putting the drug companies out of business, so stay woke on that. There’s also a more realistic possibility that the letter to CURA was a strategic strike against the company with the largest profile; the easiest way to bring everyone in line. As an investor, the “why,” doesn’t matter, and neither does the process. Shareholders are the ones who end up wearing it when public companies don’t follow the rules, so it’s important that we keep our eye on what the rules are and whether or not companies appear to be following them.

Companies who don’t follow the rules are liable to end up like Equity Guru marketing partner Ascent Cannabis (CSE:ASNT), whose license to grow and sell cannabis has been permanently revoked by Health Canada, much to the detriment of anyone who payed no attention to their habitual rule-breaking, and backed them to become the next Canopy Growth. 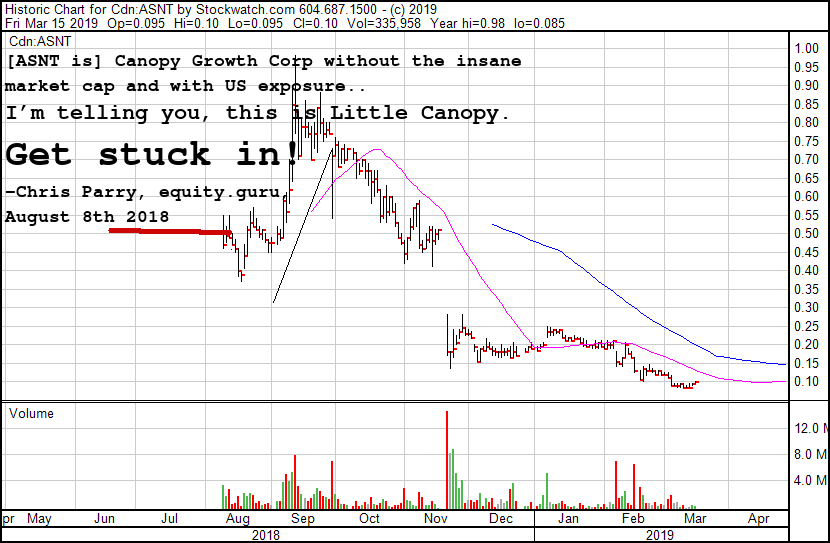 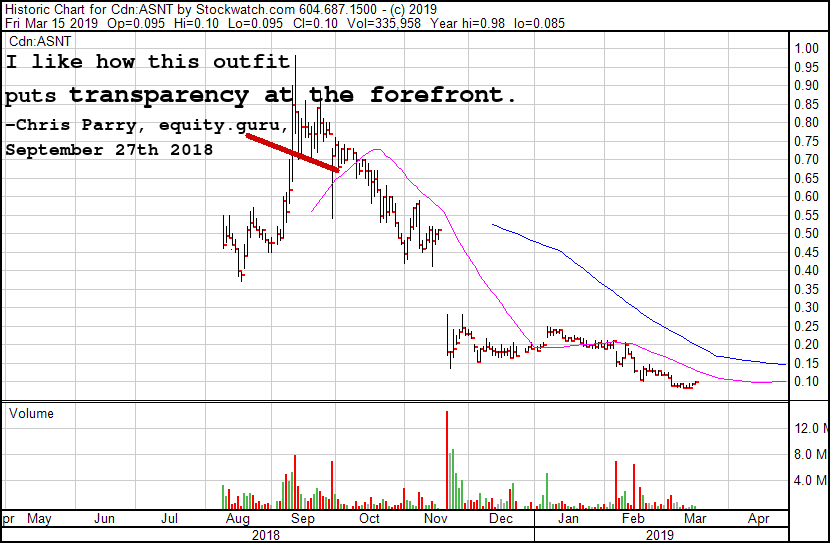 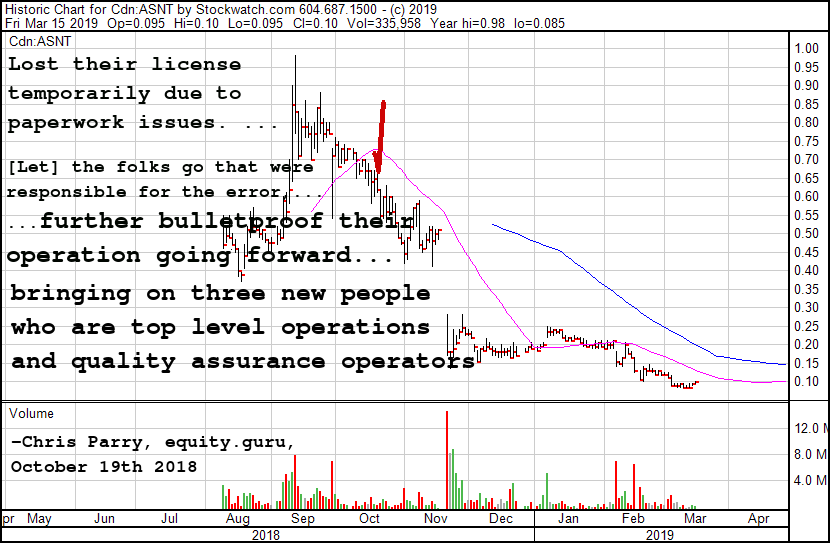 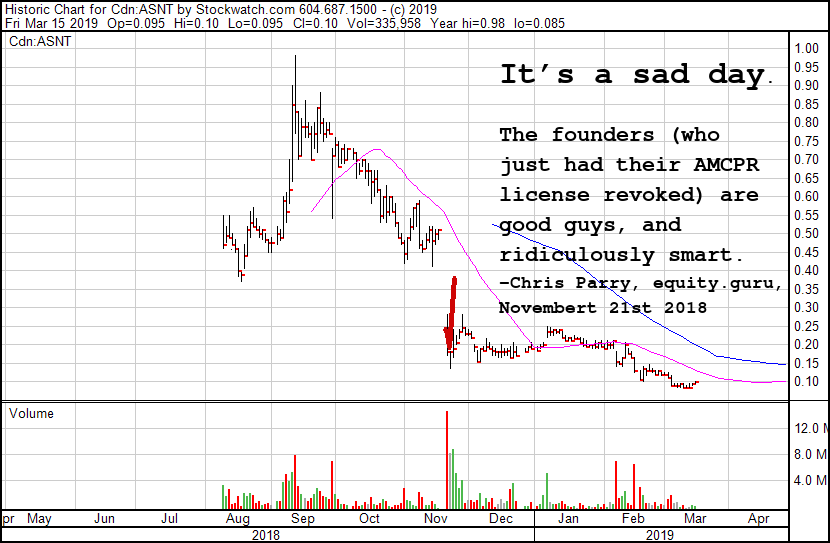 Apart from the position in Trulieve, mentioned above under the Trulieve heading, the author of this post has no interest in any of the companies mentioned in this post at the time of publication. He may own the equities of some of these companies as part of a fund or structured product.

This is an original work and not an advertisement. Fundamental Hype has not taken any fee or payment of any kind from any of these companies, any of their affiliates or anyone else for this original work.