Bloomberg’s Hyperdrive reported yesterday that Wall St. was disappointed by a Volkswagen – Ford (NYSE:F) joint announcement that much-discussed talks between the companies would not result in a grand, high-dollar joint venture between the two auto giants to charge into the electric car market. Instead, Ford and VW will work together in a research capacity to develop electrics while collaborating in earnest on commercial vehicle products. The banking crowd were hoping Ford would get a hold of some Volkswagen cash and get to making them in the near term, but no such luck. Gas-powered delivery vans being ordinary things that everyone already has right now, and that nobody takes selfies with, the announcement felt like a surprise-destination field trip to a rock quarry.

A hungry-for-growth Wall St. is well aware of what consumers desperately want: electric cars that drive themselves. Ford and Volkswagen, for their part, know that too. They also know that developing such a product is an expensive, risky prospect, and that any product developed would surely be ahead of its time – which sounds good to gadgetphiles – but is nauseating to auto makers, whose continued existence and worth depend on unit sales and revenue that happen (or don’t) in the present. Nonetheless, a growing hoard of eco-conscious consumers are waving sustainably-sourced pitchforks and demanding full electric cars that drive themselves (now!), so it’s about time we discuss how that happened. 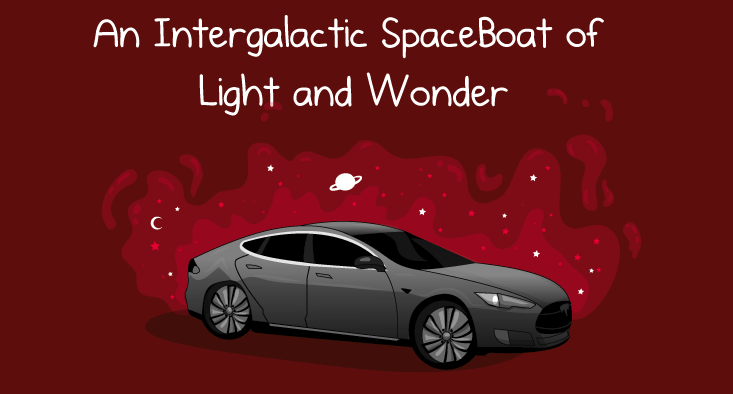 The incubation of the Cult of Elon

Tesla Motor Co (NASDAQ:TSLA)‘s first phase of growth came among the 2010s domination of finance and culture by the nuclear-scale growth explosion of the FANG companies; an era of billion dollar startups headquartered in a place where money was so abundant that the culture started to fool itself into thinking it could look beyond it.

It was into that environment that Musk was able to sell an expensive car that made its owners feel like they were part of something very new – a $100k+ sedan with a legit allure of revolution. The iPhone of cars. It was going to change everything. The S lit up when its driver got near, and popped out its door handles like a friendly dog perking up its ears. It could be improved or fixed by over-the-air updates, was fun to drive, and could silently dust all challengers while producing no exhaust. It was clean, beautiful, cool. Tesla cultivated the kind of brand engagement that auto companies spent billions on trying to buy, but couldn’t replicate if their lives depended on it.

Owners and aspiring owners packed internet forums to discuss the glorious electric present and future. The Silicon Valley sense of invincibility permeated across an Obama-era America that was experiencing the rise of the nerd. Popular culture was no longer intimidated by intellectuals. Vast knowledge was instantly available through ubiquitous pocket computers that were no longer hard to understand or use. It was easy to be smart (or seem smart), and that made it cool to be forward thinking. So Tesla spent the money that auto companies typically spend on television and print advertising on an endless stream of stunt launch events for products of the future, giving an internet full of newly wealthy professionals with a technology jonze who were hungry for stuff to talk about and a way to save a growing ecological crisis exactly what they wanted. Tesla CEO Elon Musk understood the value that publicity represents to a venture since its very beginning.

The future you want, available today

Musk didn’t invent vaporware financing, but he may have perfected it. During the 2010s, Tesla Motors, Solar City and SpaceX rotated through a parade of events that you could practically sell tickets to, where an affable, giggly, endearingly awkward Musk explained to an adoring tent-show-revival audience that he had invented roof tiles that were also solar panels, an automatic battery swapping station for the model S, an electric semi truck! A bullet train that would take passengers from San Francisco to LA in 40 minutes through a vacuum tube!

This self-styled benevolent Bond villain had everyone’s attention, and it was universally compelling. So a news media in an identity crisis, trying their damnedest to keep up in an information economy that they didn’t understand, ran every word of it through the biggest bullhorn they could find on an express route, because the person who used to be in charge of the journalism part of media had been canned to make room for someone who could get the station more Facebook followers.

On the back of unprecedented success in earned media (Tesla basically spawned a cleantech media genre of its very own), Musk’s companies raised billions in debt and equity in excess of any venture-class equity in recent memory. Investors had no problem betting on businesses with negative cash flow, because a hoard of consumers with disposable income were ready to line up for whatever they made like it was a new iPhone, whether the product was deliverable or not. Besides, Tesla, SpaceX and Solar City demonstrated an ability to tap government money through tax subsidies and aerospace contracts, accordingly, and Wall St. loves government backing. It was practically alchemy.

The first sign of trouble in paradise came in 2016 when solar companies were falling apart left and right. Tesla was fresh off of having announced the Model 3 – an electric with a $35,000 list price that would surely displace any sedan in that range – and taking deposits from an army of adoring consumers to prove solid demand. Tesla raised a total of $4.7 billion in debt and equity in 2016 behind those deposits, then proceeded to execute a takeover of Musk’s embattled Solar City, which was swimming in $7B worth of debt, low on sales, and looking around at the collapse of all of its industry peers. Wall St. threw a fit – because what the hell happened to making the car!? But Elon and his army told them they just didn’t understand. This was a future they were building. They had to think long term. A “gigafactory” was about to make batteries for every wall and car in America. The solar installations were going to be vital.

Today, the making of the car isn’t going so well, and it’s a testament to Musk’s talent as a promoter that so many people still want to buy and drive Teslas. Quality problems abound, the factory can’t get parts to body shops for collision repair, and a growing number of amateur sleuths have made a sport out of photographing lot-fulls of Tesla inventory all over the country, raising questions about demand for the 3. The same hyper-connected, tech-savvy consumer class that made Tesla by becoming owners of its cars and its stock are now posting photos of frozen-shut door handles, paint flaws and lineups at superchargers.

10 #Tesla in line to get #supercharger ended up to give up. @Model3Owners @Tesla @elonmusk pic.twitter.com/KaCnCw62aY

It isn’t that Big Auto doesn’t believe in consumer demand for electric cars, they just have an appreciation of the infrastructure build-out required to make them valuable consumer products at scale. And they’re not about to put themselves in a position to carry the cost of that infrastructure. If Ford doesn’t make money and show growth, the market is going to eat it for lunch. Holding circus shows about the future doesn’t work for mature businesses. That act runs on the audience’s ability to imagine grand, un-tapped potential. VW told the world in November that they would spend $50 billion on making electric vehicles, but we don’t expect them to make large numbers before the world receiving them is capable of charging them.

GM’s 2011 electric offering, the Volt, was equipped with a gas tank to extend its range, making it a plug-in hybrid and not a true electric. GM announced they would discontinue the Volt in November, replacing it with full-electric offerings that, much like VW’s, are presently only notional. To achieve a growth premium, GM has been done a deal to spend Softbank’s money developing the equally (more?) risky consumer fantasy of self-driving technology, which surely screams “LIABILITY!!” so loud that corporate counsel and auditors need earmuffs.

Opening the throttle with nothing left to lose

But risk assessment isn’t part of the process at Tesla, a company that looks increasingly like it’s living on borrowed time. A proto-self-driving “autopilot” feature available on Model 3 and S has been implicated in crashes since it’s inception. Its successor, the full self driving (FSD) feature was sold as an option to early Model 3s  adopters, to be pushed to them over-the-air eventually, when it’s ready. Last week, the company had to clarify that, despite taking money for the feature, cars that drive themselves were still years away. Fundamental Hype thinks they missed out by not charging for the rights to the notional feature monthly, as a subscription.

A growing group of investors who are periodically short TSLA, and amused onlookers cheering them on, are forever pointing out TSLA’s questionable book-keeping and reporting. The $TSLAQ twitter hashtag is full of wisecracking shorts pointing out that Tesla doesn’t carry nearly enough warranty reserve, held an eleventh hour fleet sale immediately ahead of the last earnings, maintain an odd, moving gap in VINs that may have to do with abnormally long registration times, and frequently make hay out of Musk’s erratic behavior and actions. As PriceWaterhouseCoopers prepares to audit Tesla’s financials, Musk’s stunts are getting increasingly sloppy and erratic. A show-and-tell for his new Boring Company tunnel featured a small, sloppy, bump-filled tunnel that only got people wondering how a tunnel that handles one car at a time is any kind of innovation. A general consensus that the demo’d tunnel was a rush job just begged the question: Why the rush?

Now we just need it to hold for 6 weeks with a CEO that has gone completely rogue simultaneously at 3 different companies. pic.twitter.com/pp9Phh3WnR

The going theory is that the money that would have been raised behind a well-recieved Boring Co. demo would have been shuffled through founder stock sales and purchases to plug holes in SpaceX, which recently came up short on a $500M raise forcing a round of layoffs (h/t Next Big Future). The Daily Caller reported in November that NASA, who has a strict no-drugs policy for employees and contractors, was reviewing SpaceX contracts in the wake of Musk’s publicly burning a blunt on the Joe Rogan show.

The latest development saw Musk making a big show out of building an enormous retro-styled rocket for a staged photograph that the news media was happy to show without any context or investigation.

Musk’s explanation for expending the company’s limited resources on this surreal curiosity that looks like it was made out of tinfoil?

“It needed to be made real.”

He offered no explanation of why, or why now.

Tesla’s much awaited audited year-end financials for a year in which they lost talent at key positions, settled with the SEC for a twitter lie that was designed to create a short squeeze, and created another one with an upside Q3 earnings surprise that may as well have come from immaculate conception, is expected February 5th.

The sword of Damocles that appears to be hanging over the company is $920 million in convertible bonds scheduled to mature March 1st. The bonds carry a conversion price just under $360, so the company can save some much needed cash reserves if they can make the stock perform. TSLA closed today at $346.05.