Sokoman Iron Corp. spent most of the year trading between $0.025 and $0.05 cents. One of hundreds of dozens of penny dreadful Vancouver mining companies that nobody had ever heard of.

In July, the very first hole drilled into their Moosehead gold property in central Newfoundland returned 44.96 g/t gold, 109 m down hole. Since they released the news July 24th, they’re something everybody has heard of. 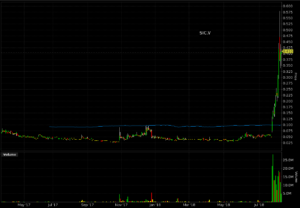 SIC.V is trading at $0.41 this morning. In the days that followed the news, it was the number one trader on the TSX.V in terms of dollar volume.

There’s no fever like gold fever, and grades north of an ounce a ton will make ore at any grade. The July 24th release contains results from the first three holes of a 12 hole program at Moosehead. The holes were drilled into a previously unexplored area, the Eastern Trend.

With assays from 9 holes to come, demand for SIC remains strong, despite a 400%+ move.

At $0.41, Sokoman has a $22 million market cap. That’s small by gold company standards. They announced a $3 million financing at $0.15 almost immediately, led by noted gold bug Eric Sprott, who probably showed up at their offices in a helicopter with a briefcase full of cash shortly after he saw “44 g/t” over a mining width in the news release.