So here comes Aurora into the first quarter of the great Canadian retail market. Their peers rode the legalization train to some big jumps in unit sales, and Aurora didn’t do so bad themselves overall.

A 165% sales jump since September is respectable. It’s more than Aphria Inc. (TSX:APHA)(NYSE:APHA)’s 65% jump, and less than Organigram (TSX.V:OGI)‘s 515% jump, but those companies had a month less to work with.

The Canadian consumer market accounted for 3,806 kg of those sales, and the company said on the call that the data they’re getting from the provinces (which they can’t share with us, because it’s top secret) indicates that Aurora is moving one in five grams of consumer bud country-wide… But they’re already SO OVER IT.

Retail is more of a long tail strategy…

The Canadian retail businesses that Aurora counts as portfolio components, Choom Holdings (CSE:CHOO) and ALCANN (TSX:CLIQ), are both struggling along with the botched retail rollout (so much for vertical integration), but Aurora, the ultimate cultivator, isn’t sweating. They’re treating the Canadian retail market and their provincial supply contracts like something they’re putting up with. 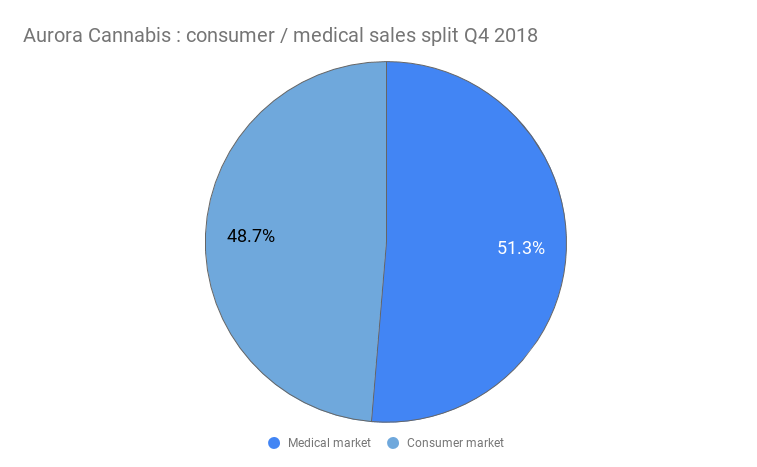 The way Aurora CFO Glen Ibbott made it sound on the company’s earnings call this past Monday; yeah… they’re selling to the Canadian retail market right now… but do you have any idea what they can sell this kind of high-test for overseas?! They’ve got contracts with the provinces, and they’ll live up to them… but Aurora’s been overseas. They’ve seen what this stuff goes for. They’ve got a guy!

Looking ahead in fiscal 2019, the Company expects Canadian consumer market sales to contribute lower average net selling prices per gram equivalent of cannabis than those from the Canadian medical and European medical markets. The Company has prioritized growth and supply to the Canadian and international medical markets and will continue to introduce higher margin products such as softgel capsules and pre-rolls. Later in calendar 2019, new regulations under the Cannabis Act will allow for the sale of higher value, in-demand items such as vape pens, edibles, and other derivative products.

So far, Aurora’s Man on the Continent takes 20% of their medical weed by revenue. Their reporting makes it hard to work out what that amounts to by weight, but it’s clear that they think they can get more. Whether those prices remain stable or not in a rapidly shifting market is an open question.

It’s unclear where most of this European product is going specifically. Aurora has various export and distribution licenses in foreign countries in various states of beginning and completion. They were proud of having sent a shipment of product to the UK on Monday, but were careful to say that it’s very small. Typically, Aurora is selling the dream of enormity that COULD come from foreign medical markets.

For now, though, they have to sell most of their product here, where it’s grown. The selling part doesn’t appear to be a problem when the product’s right, but it’s not quite clear if Aurora has mastered the “growing it,” part. 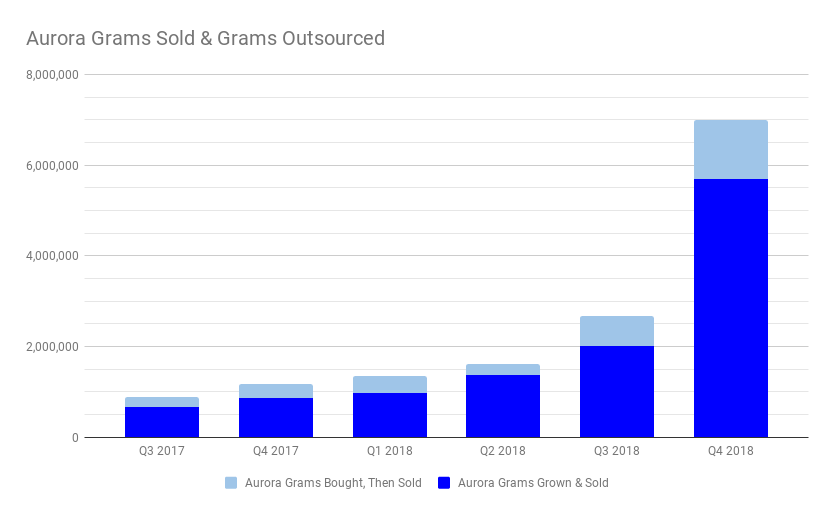 As we alluded in yesterday’s Aurora post, Aurora does not yet appear to have the hang of the facilities that they’ve built. Jumps in in-house growth line up with the MedreLeaf and Cannimed acquisitions, and their per-gram cost to grow in the quarter (which included those dailed-in facilities) didn’t impress any of the analysts on that call. The consensus is that costs are going to have to go down.

And Aurora is sure that they will. The company has remained on-message, projecting that they will be producing high-grade at less than a dollar a gram once fully scaled up (and projecting higher revenues from international markets that aren’t yet developed in the very next breath). That full scale-up should produce 150,000 kg of high-test product a year, which is certainly an aggressive number.

While Fundamental Hype is on record mocking the concept of “funded capacity,” Aurora endeared itself to us early on by clearly defining “capacity” as the amount of sales produced by their operations. In the beginning, sales was all we tracked, but this lack of supply got us looking at inventory, and wondering whether or not these large LPs have a pile of unsellable flower stacked up somewhere that they’re waiting to process and unload on the coming extract market. Aurora’s inventory is kind of hard to read, and any attempts to try and figure it end up becoming a look at their unique way of accounting for their production and sales.

Unlike Canopy Growth Corp. (TSX:WEED)(NYSE:CGC), Aurora does not publish their inventory in kilos. They publish a “grams produced,” figure and break the goods in inventory down by value. When Graeme Kreindler of Eight Capital tried on the call to drill down on what that inventory was and how it was split up, he didn’t get much of an answer. Ibbott made the finished goods in the inventory at about 15%, and said that the stuff didn’t stick around that long. They’re trying to get their grams produced number equal to what is available for sale. 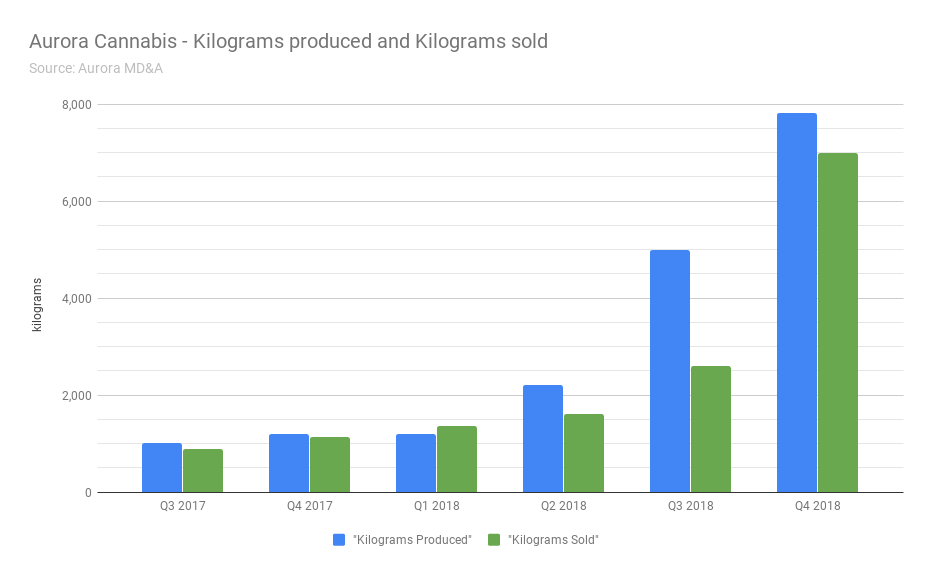 And it looks like he’s right. Aurora’s unique-in-the-industry “grams produced” figure matches up pretty close to their sales figure. It’s unclear whether or not, for the purposes of this tally, Aurora considers buying a kg on the wholesale market having “produced” it, but never mind that. As we mentioned, they count inventory in dollars. 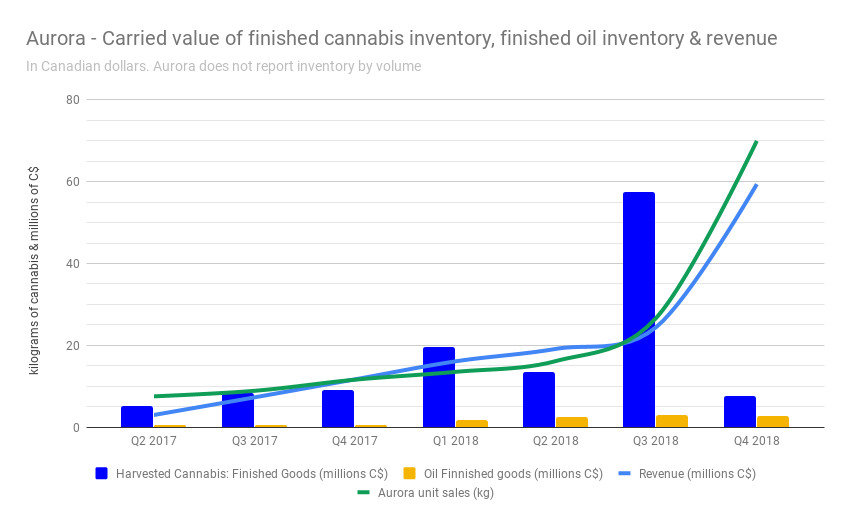 And by that measure, it doesn’t look like they had very much at the end of the year. This is consistent with Ibbott’s insinuation that Aurora product flies off the shelves. We make note here of the inventory spike in Q3 leading the revenue and unit sales spike in Q4. That inventory has to be replenished somehow if they want to top themselves in Q1. 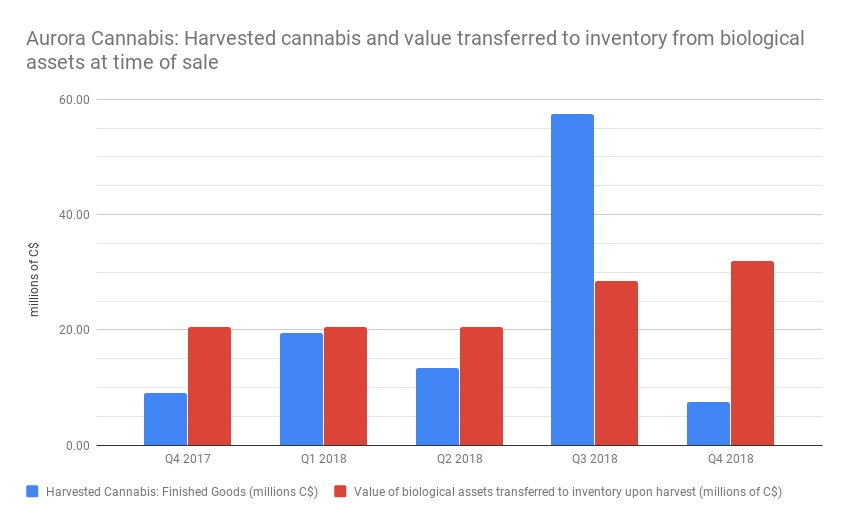 Play with these numbers long enough, you find stuff.

The value that Aurora transfers to its inventory upon harvest doesn’t line up very well with the value of the harvested cannabis in their inventory. That isn’t exactly a scandal; valuations are messy, and there’s no reason these lines should be perfect mirrors of each other, but it’s weird that, over three quarters, from Q4, 2017 through Q2 2018; Aurora’s transfer to inventory on harvest were the exact same value. 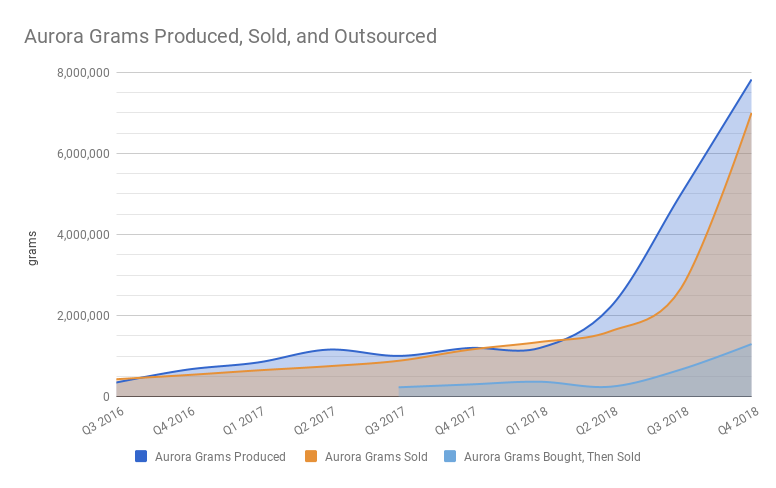 Determined to calculate Aurora’s inventory, we lined up their reported production, sales and outsourcing. Just to get a feel for it.

This, too, lines up with Ibbott’s statement that the stuff doesn’t hang around too long. They’re producing nearly 600 kg more than they sell…. unless….

If, as per common understanding, all of the product Aurora reports having “produced” is grass that they in fact grew themselves, then subtracting the portion of their sales that came from in-house sources from their total production should give us the left-over inventory.

The implied unsold grams can’t be the finished goods inventory at any kind of consistent valuation. Two million unsold production grams this quarter valued at that quarter’s book value of finished goods works out to $4.80/gram, but the previous quarter would have to be valued at more than $20 /gram in inventory. This ain’t it.

Either Aurora’s “grams produced” figure includes the grams that they’re buying on the wholesale market and re-selling (definitely possible). Or there were 2,000 kgs of product produced at Aurora that didn’t get pushed out into the market.

We’re expecting Canopy Growth Corp. to report their Q4 numbers any minute now. We noted last week in our inventory analysis that this reporting should show us whether their inventory was a stockpile to get ready for the retail market, or if they hadn’t yet got the hang of growing and were stockpiling low-grade in hopes that the export market would save them. It’s increasingly looking to us like Aurora avoided the cannabis cultivation learning curve all together by buying working operations that could produce, then supplementing their output with product from the wholesale market.

Two days ago, Aurora led analysts on a tour of 800,000 square foot Aurora Sky. Videos have been popping up on social media of some impressive automation features that, as far as we know, are entirely new to the cannabis space. A factory farm may or may not be able to produce high test at a cost below a dollar a gram, as Aurora projects, but we expect Aurora to continue treating it like a foregone conclusion.

CORRECTION: A caption to the Eiffel Tower photo in a previous version of this post mis-identified Aurora COO Cam Battley as the company’s CFO. Thanks to Reader in the comments for letting us know.