Namaste Technologies (TSX.V:N) told the world yesterday that accounting firm Price Waterhouse Coopers had resigned as their auditor, delaying the release of the company’s year-end financial statements. N says that they’re unlikely to be able to file the financials before the Mar. 31 deadline, but doesn’t mention the very real potential that failing to file on time could result in a cease trade order or a delisting from the TSX Venture exchange. PwC is Namaste’s second former auditor in four months. They left without ever conducting an audit.

The company followed up this morning with news of an all-cash acquisition of a 49% stake in Calgary based private chocolate company Chokolat, an apparent stab at the coming edibles market, despite the fact that shareholders would no doubt prefer to hear about what it was that PwC wouldn’t sign off on. So we dropped what we were doing and jumped into the Hypemobile to give you guys a closer look.

Let’s start from the top (line)

We don’t have any special knowledge of what specific treatment PwC wouldn’t abide, but having covered Namaste for the better part of the year, they have our sympathy. Reading Namaste’s financials is like trying to follow the plot of the 2004 indy sci-fi flick Primer, complete with jumps between time periods and parallel realities.

In Canada, a public company’s books must be audited once a year, at the end of the fiscal year, for the previous twelve months. The auditors don’t look at the three statements for the three quarters that precede the year-end, just the 12 month statements at the end of the year. The interim statements are prepared by management. Our first attempt at detangling N was this past summer, in a vain attempt to sort out the reason this company had a $420M valuation.

Namaste’s 2017 fiscal year ended at the end of August, 2017. Those year end financials (filed late, following a cease trade order), reported that the company spent $9.6 million on goods they sold for $10.9 million, to create a gross profit of $1.3 million. That’s 12.5% gross margin on the year. Not great, nothing wrong with it. It looked like this: 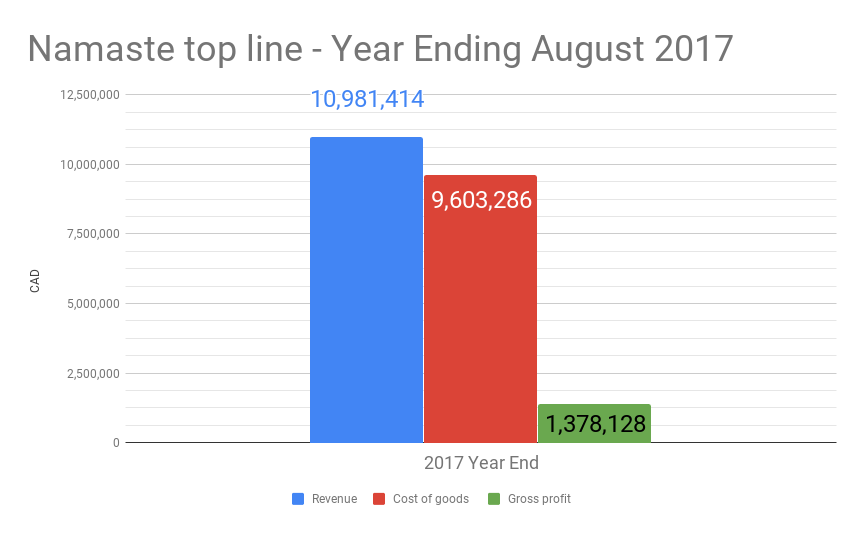 But Namaste’s financials didn’t break out that quarter ending in August. Anyone who wanted to know what they did in the most recent quarter had to subtract the previous three quarters from the year end total. Some of the “people” who do things like that are the computers over at Morningstar, who are charged with conveying that data to their subscribers. Here’s how they broke it down. 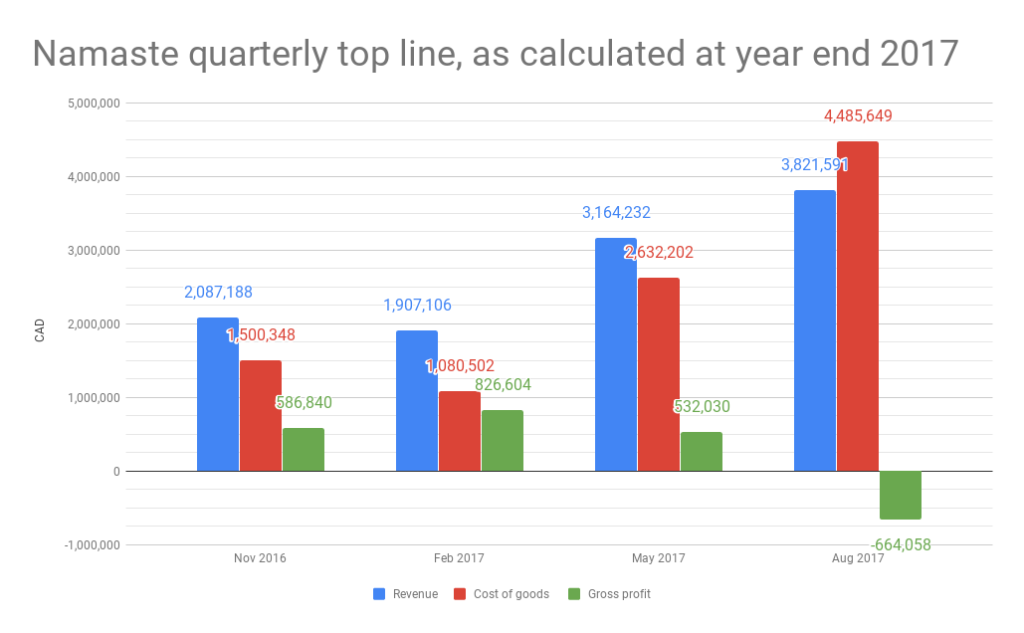 No mention of a $664,000 quarterly loss in the earnings from Namaste, though, because, that’s just a mathematical expression of reality. The reports that the auditors signed off on included a $600,000 inventory write down in that quarter – ostensibly goods that wouldn’t sell – and there’s just no place to put something like that other than the cost of goods, so the trick is to tack it on the last quarter, and focus on the gross profit for the year.

N didn’t invent burying their write-downs in Q4, and it’s easy to forgive as simply putting their best foot forward. But eagle eyed (or obsessive compulsive) readers may notice that the four sets in the quarterly graph don’t add up to the totals in the year end graph. The gross is about $100,000 out, and that’s where this weird juggle job appears to start.

(This video is of juggling chef Han Xiaodu, not Namaste’s CFO Ken Ngo)

Twenty days after filing the 2017 audited annual financial statements, Namaste filed an amendment and re-statement to their November 2016 statements, moving some costs that were incurred in the November quarter back to the previous quarter.

The Namaste MO appears to involve (in part) being told by auditors that an inventory write down has to be applied to the cost of goods, or that something the company has been classifying as an operating expense is actually a top line cost, then moving other top-line costs from period to period like lego blocks on various pretenses (booking them when the goods or service was received vs. when they were paid for) in order to make up for some or all of the difference. It’s the behavior one might expect from a company trying to keep its head above water until it gets a burst of revenue from a licensing or legalization event.

When the Namaste restatement list was last sighted in the May 2018 financials (re-stating the May 2017 financials), it contained no fewer than seventeen items that had to be re-stated (follow along on pages 27-29 if you’re curious). It’s unclear how much of this (if any) is part of a notional attempt to protect their margin, but a few re-stated items affecting top-line that stood out include:

Namaste’s all time top line looks something like this: 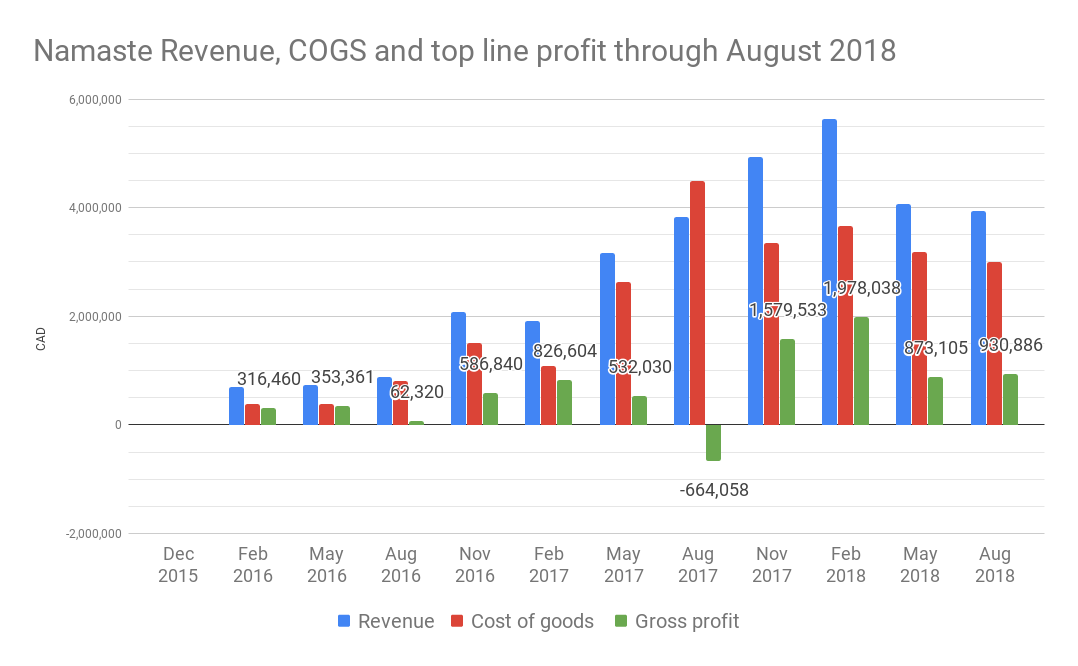 It’s all in the timing

The May 2018 financials that contained a laundry list of re-statements to be applied to the May 2017 statements were supposed to be the final management-prepared interim report before the audited, year end statements which were to be filed for the period ending August of 2018. On September 25th of 2018, right around the time audit work ought to be starting, Namaste parted ways with Montreal based auditor MNP, framing the departure as a switch to PwC.

Perhaps smelling blood in the water, Citron Research issued a scathing short report on October 4th that accused the company of, among other things, fraudulently describing a non-arms-length sale of their US subsidiary Dollinger Enterprises as an arms-length transaction. Citron promised to forward their findings to the new auditors and flat out doubted that the company can pass an audit… and the market shrugged.

On October 25th, Eight Capital helped Namaste issue 17 million share-plus-warrant units at $3 to raise $51.75 million in an over-allotted financing, to investors who perhaps reasoned that PwC would never sign on this close to a fiscal year end for something they didn’t like the looks of. The raise was a demonstration of the company’s one true talent.

The money having been secured, Namaste issued the un-audited 12 month financials as a management-prepared interim report on October 30th, pushing their year end by one quarter, planning to have PwC audit a fifteen-month year ending in November.

It seemed at the time like everyone had missed an August 7th announcement, pre-MNP departure, that pushed the year-end back a quarter, issuing some stock options while they were at it.

Let’s go to the charts

There’s no reason to worry about the bottom line when the street is ready to cough up money whenever you ask for it, so N didn’t let it bother them. The Great Legalization was afoot, and they had money to burn building the Amazon of weed or whatever. We once wrote a comprehensive tally of the drunken-sailor-like spending spree that they were on, but lots of that was capex. The N losses appear to have been accumulated flying about to do those deals, meeting with recently terminated ORH Marketing Ltd. in Ireland, and filming weekly episodes of Namaste 420 (RIP). 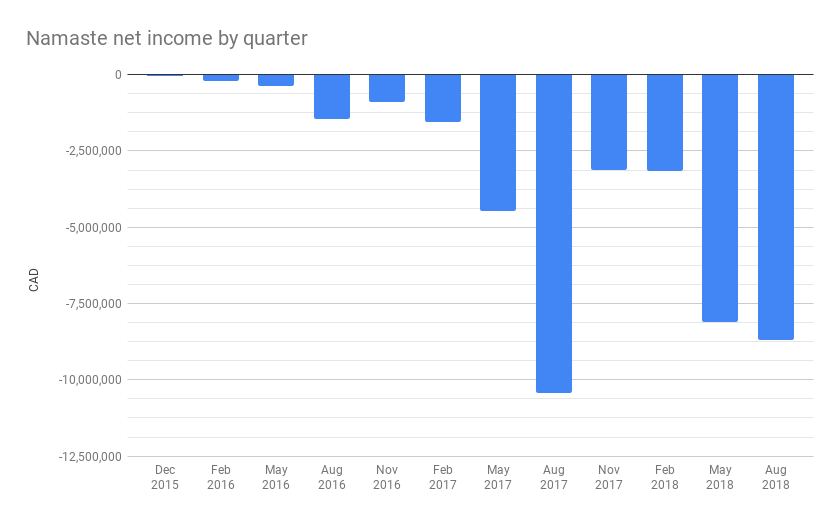 But there IS one other major expense… 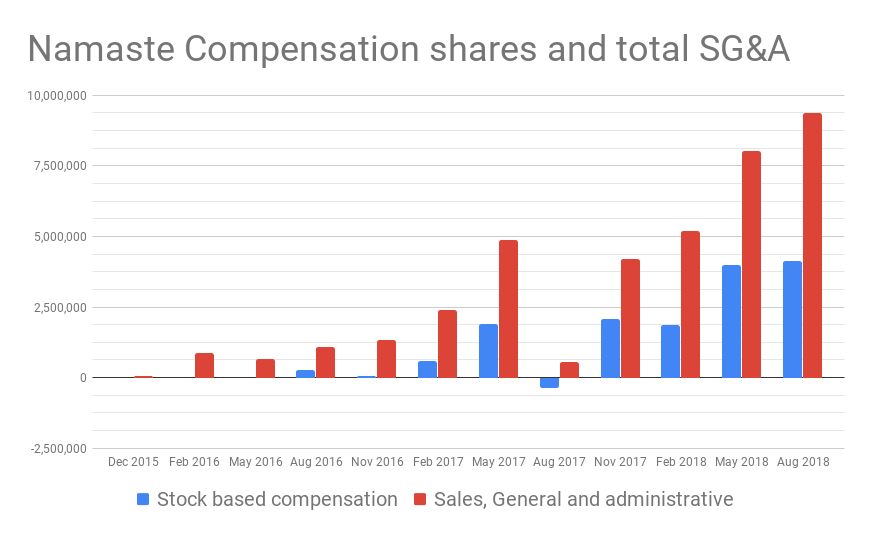 Namaste execs are proud of the fact that they’re shareholders, and they sure know how to accumulate. Stock-based compensation expenses accrue in the period that the options vest, so most of these were issued a lot earlier, and are no doubt deep in the money. Just for fun, let’s line that share based compensation number up with the company’s revenue. 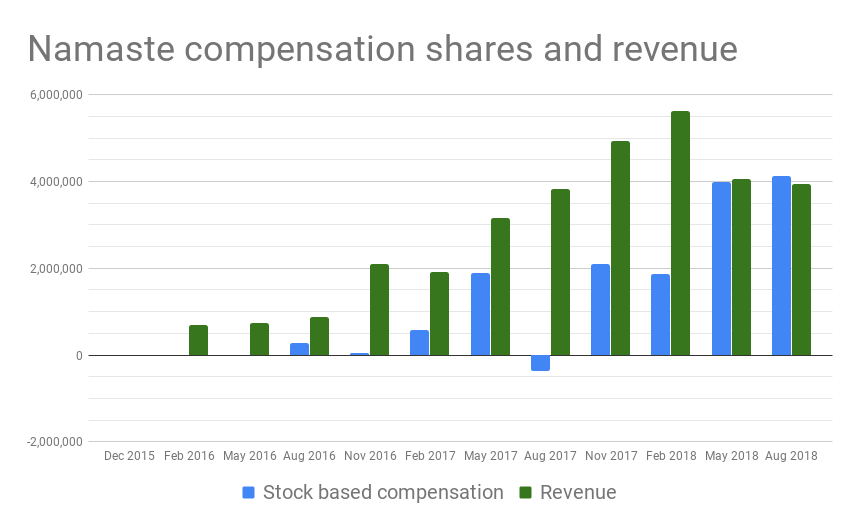 A cynic might call share-based compensation line that’s equal to the revenue line a convoluted way of pocketing whatever’s in the till, but that only really happened for the last two reported quarters.

The reason we’ve got all this data so close at hand has to do with an inordinate amount of time spent trying to explain that a company whose earnings revenue peaked at $5 million a quarter, who busies itself with moving small accounting entries about to protect a gross margin only briefly in the millions, has no business with a market cap in the hundreds of millions of dollars. 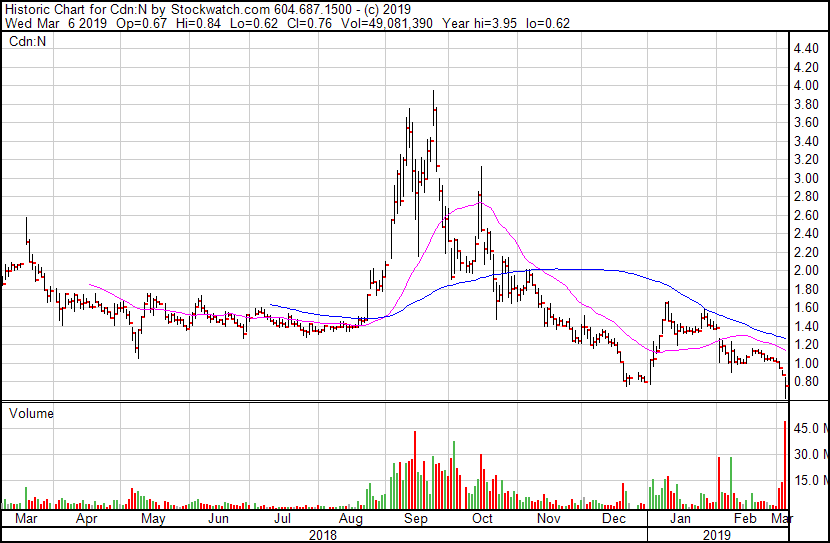 Sean Dollinger did not pick up his cel when called for comment on this article. His voice mailbox is full.

Subscribers get new posts as soon as they drop
About Braden Maccke 72 Articles
Founder and Editor in Chief at Fundamental Hype, a blog about venture stage finance and the media that supports it.