In the days since On TILT part one, CSE-listed TILT Holdings’ (CSE:TILT) share price has fallen off the table, this author has been subjected to the most underwhelming of smear campaigns, and Health Canada has changed the policy by which it awards licenses to grow marijuana. It’s not clear whether or not any of those things had anything to do with each other, but if Health Canada is behind this smear job… well… I forgive them.

The AMCPR licensing policy has been changed to one that no longer licenses facilities that are not yet fully constructed. At the time TILT subsidiary Sante Veritas received its “confirmation of readiness,” letter from Health Canada, companies could seek licensing pre-construction but, at 177 total awarded licenses, one might surmise that HC was unhappy with the pace. Existing applications like TILT’s will be subject to a “high level review,” and rewarded with a “status letter,” if the department isn’t concerned about the plan. If Health Canada sees TILT’s Powell River operations through the same lens as some of the locals, it could put a kink in the license.

Plenty more where that came from

This isn’t likely to bother management who, much like the rest of the venture-stage marijuana market, are much more focused on US operations. The CSE-listed companies that have put together various patchwork iterations of state-side cannabis operations in all ways allowed by loosening state laws in an environment of ongoing federal prohibition have managed to draw the interest of a great deal more risk capital than their Canadian counterparts. The legal certainty offered by the more mature Canadian regulations doesn’t appear to mean as much to investors as the potential available in the United States.

It isn’t a hard sell. A carved-out right to become a supplier to a legal market looks more and more like a mid-stage venture, one where the initial lift has already blown its stack; especially considering the fact that they’re still figuring out the rules, and feeling around in the dark for the business dynamics. Better to get a hold of a piece of the states, and bet that more capital is going to follow as rules open up and more investors get access to it.

Some day, this silo’d, state-by-state market will be able to benefit from the advantage of inter-state commerce like the rest of the country, and make these companies into traditional, grown-up enterprises. The entities being floated now are collections of parts that investors are being invited to bet will become components of those enterprises, and that’s an attractive up-side. The down-side risk is that the business won’t be able to sustain themselves (lol!) be sustained for as long as it takes the laws to catch up with the will of the American people. Naturally, nobody can say for sure when or how that can happen, or even if.

TILT’s Integrated US verticals and their ability to integrate (vertically)

TILT talks a big game about vertical integration, and they might consider doing themselves a favor by cutting that out.

TILT is a vertically integrated technology and infrastructure platform delivering a range
of products and services across the cannabis industry. TILT operates production facilities in multiple markets across the U.S. and internationally, delivering genetically researched cannabis products through vertically integrated operations, largely through the wholesale market in partnership with retail operators. The Company also provides a suite of software and services to its retail partners, helping them connect with retail customers with knowledge based promotional activities.

This business description kind of scans like a plan to open a bar that one might hear from a new acquaintance who’s lit up like a pinball machine, and the bar is also a retro-gaming den (“art deco style, though… real classy like. Waitresses with modern punk aesthetics in period fashion, so they’re in evening dresses with neck tattoos!”). It appears right ahead of the going concern statement that reminds us that this company may or may not be able to secure the capital required to finance their operations and expansion.

TILT’s patches of the developing US marijuana landscape being able to work with each other to form operating units instead of spare parts is a neat concept and an attractive sales pitch, but it isn’t something we’re going to count on or apply as a potential premium. It’s a fine aspiration, but at the moment, these components have to be considered on their own merits.

The assests merged with Sante Veritas and the $120M in financing to form TILT Holdings in November were:

Baker is a customer relationship management (CRM) software for marijuana dispensaries. Effectively, it’s software that helps a dispensary’s sales staff to make sure they’re squeezing every possible dollar out of their clientele. It’s been our experience that CRMs are as good as the sales staff using them, and we’re unaware of popular implementations of such things in over-the-counter retail. That doesn’t mean it won’t work or isn’t working already. Baker claims over 1000 active dispensaries as clients and the website is full of testimonies from happy dispensaries, as one might expect. Baker claims most of their revenue from Colorado, followed by California and Washington State.

The software as a service company showed aggressive revenue growth in the first half of 2018, and an equally aggressive growth in net loss. Their second half is harder to call, and we’ll get to that after we go over the other TILT tech component company:

Which is in something of an identity crisis. The company’s Bend, OR division produces modular growing units – effectively a just-add-water hydro setup in a shipping container, and maintains a marijuana-based e-commerce site that looks like it wants to sell weed on line, but isn’t allowed to yet, out of a Nashville, TN office.

Tilt reports $636,409 in revenue from the Baker + Briteside technology unit in the final 5 weeks or so of 2018, all of which came from Baker at a very high margin. Briteside booked $1.4M in revenue in the first three months of 2018, at a 22% gross margin, but hasn’t showed any receipts since.

There’s a reporting gap here between June 30, 2018 and November 21st, 2018, so there’s no way to tell whether or not that’s the period in which Briteside sold a few of those modules to an outfit in Pennsylvania. They also sold two in Massachusetts in 2017, and one might assume that they sold them to the same cultivation outfits that became:

Sea Hunter Holdings is the part of this roll-up that’s actually in the cannabis business. It has dispensary and cultivation assets in Massachusetts, Florida, New Jersey and Ohio. Pre-TILT, Sea Hunter appears to have walked around America loaning money to cannabis co’s, then converting those loans and the accrued interest to stock. Tilt then rolled all of those licenses up with the software assets, theoretically producing the product that all of that advanced technology at Baker is supposed to sell, theoretically using the modules that Briteside is supposed to make.

Most of Sea Hunter’s cultivation licenses are pending or provisional or under construction, so there’s plenty of room for growth. TILT’s listing application is careful to point out that, in many cases, the licenses awarded or applications submitted are one or a few of a small number available in their respective state at the time of the listing application (August 2018), and also lists numerous caveats about the states reserving the rights to issue more licenses or receive more applications at their discretion.

Being one of only a few licenses or applications in any given jurisdiction does represent a first mover advantage in a regulatory sense, but there is no way to build an associated operational advantage without actually operating, and growing good weed takes practice – just ask Sea Hunter.

Since TILT’s cultivation assets are comprised of multiple fluid situations, it’s tough to say for sure, but it looks as though all cannabis produced by TILT in 2018 came out of one of their Massachusetts medical cannabis operations where, to the extent that the company grows and cures the product that it sells through the dispensaries, they have successfully vertically integrated! The company’s cultivation assets sold $660k worth of product in the first six months of 2018 to gross $79k. By the end of the year, they had managed a gross LOSS of ($315,000), partially thanks to a $1.4 million impairment to inventory, which isn’t discussed much.

The Future of TILT…

It wouldn’t be like TILT to grow the business on its balance sheet. The company has made an acquisition of Pennsylvania-based cultivator Standard Farms, Nevada and California based distribution network Blackbird Holdings Corp, and done a $210 million deal for vape-tech company Jupiter Technologies that included $70 million in cash. All of these acquisitions were tipped in the listing document as letters of intent, but shareholders first learned the final terms in January.  They’ll get their first look at these businesses in action, and their first look at their (vertical) integration when TILT files its Q1 financials. Thanks to twitter stock sharp Jim Moran (well worth the follow) for reminding me that the financials for the period ending March 31st are due this coming May 30th.

Since venture-stage businesses operate at a loss, rolling a few of them together ends up burning a lot of cash, and so do the cash components of deals done for new businesses. Last week, TILT took out a $20 million loan at 18.75% interest, just to get them through to payday. It’s the type of loan that Sea Hunter used to make to the companies whose various developing marijuana licenses now belong to TILT. The principle and interest of those loans became TILT stock last seen in the possession of the former principles of Sea Hunter. The loan is secured against the Standard Farms Pennsylvania assets, and the assets of Sea Hunter, LLC.

(Shout out Sean McVay . Thanks for reading, Coach.)

Standard Farms shipped 200,000 “units of product” to “95% of [Pennsylvania’s] dispensaries,” in their lifetime but, so far, nobody is saying how much revenue that generated or how much cash it burned. Similarly, TILT tells us that the Blackbird distribution network “supports more than 250 wholesale and retail cannabis operators in Nevada and California to transport an average of $30 million in wholesale cannabis products every 30 days,” but doesn’t say much about what Blackbird is expected to contribute in terms of income as they help the company work towards a vertically integrated outcome.

Jupiter Research is a standout here. The January 14th release announcing the final terms has Jupiter booking “US$105 million in orders in 2018, with approximately 20% EBITDA margins,” which puts TILT’s all-in purchase price at an uncommonly reasonable 10x earnings.

Whether a distribution network can work to link up dispensaries with an e-commerce portal with an accessory business, then form like Voltron with a modular grow room factory and some cultivation assets to become a pre-made part of the US cannabis landscape of the future isn’t something worth handicapping. The internal and external variables make it impossible. TILT has to show that it can maintain its parts before it can become the sum of them. For now, all ayes are going to be on whether or not these latest additions generate enough cashflow to pay off this bridge loan. If it does, and the market cooperates, expect an equity raise to keep these developments live a while longer, keep TILT ahead of the curve while the world catches up at its own pace.

Screenshot below of the profile of user who apparently joined twitter right after On Tilt Part One, just to call me a twit. There’s no telling who’s behind it, but the campaign’s abject stupidity would lead us to suspect… actually never mind. Could have been anyone. 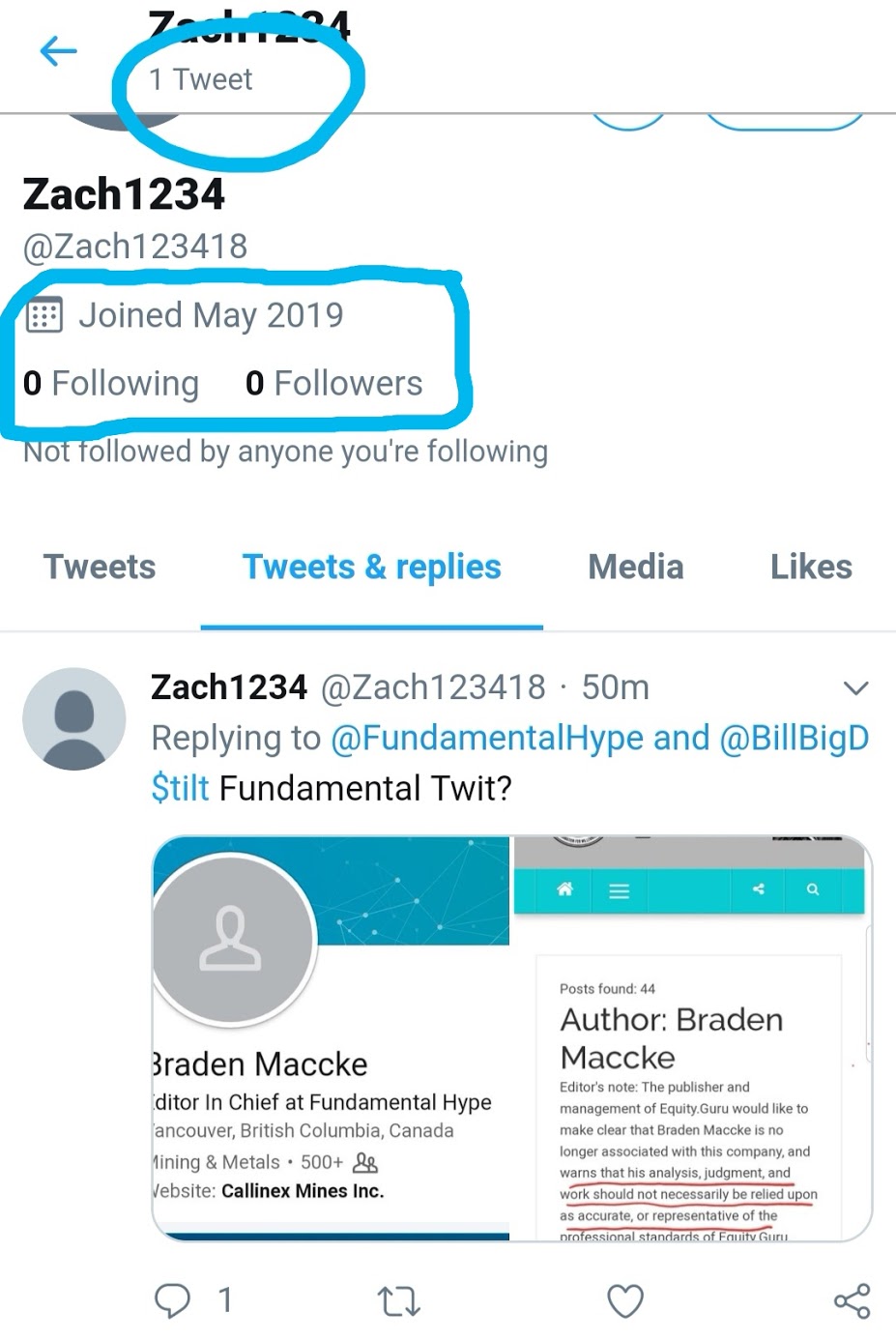