It’s been a whirlwind few days over at Namaste Technologies (N.V).

The company released their much anticipated Q1 financial statements Monday, along with an announcement about $900,000 in top line profit on $4.1 million in revenue from the current incarnation of “your everything (but) cannabis store” in the period ending May 2018. The always fashionable e-retailer announced the same day that they have plans to list on the NASDAQ.

The release about the company’s NASDAQ application uses the future tense, and is explicit that N being listed on the NASDAQ is contingent on the NASDAQ approving 40-F paperwork that Namaste hasn’t yet filed:

In advance of the listing on NASDAQ, Namaste will file a Form 40-F Registration Statement with the United States Securities and Exchange Commission. The listing of the Company’s common shares on NASDAQ remains subject to the approval of NASDAQ and the satisfaction of all applicable listing and regulatory requirements, including the effectiveness of the Form 40-F Registration Statement.

The street took Tuesday to absorb the new financials and the prospect of a NASDAQ listing. The stock was down a nickel on lowish volume. Much of the discussion had to do with a share consolidation that may have to take place to qualify Namaste for the NASDAQ, which only lists companies who trade over $2, $3, or $4 US, depending on whether or not they meet other requirements (see Investopedia’s summary for a good overview). The next day, the overall sentiment on the rollback was mixed at best in the live chat on Namaste’s weekly live-to-youtube shareholders update, and we’ll get into that rollback after we talk about our favourite show.

Sean called this one in from summer camp

Each Wednesday at 4pm EST, it’s time for Namaste 420, the internet TV show that’s taking small-cap finance by disruptive storm. This week’s episode didn’t disappoint. CEO Sean Dollinger phoned it in from the road on his way to GritCAMP, a Namaste-sponsored event that looks like a summer camp for people who make their living selling buzzwords.

The Best Namaste 420 Yet

This one was epic. New CFO Ken Ngo was in-studio with Mark Bruning, and he came off like a likeable, capable operator. Very capable. Maybe a bit too capable. Namaste was patting themselves on the back for filinging these latest interim statements on time, and those statements invite a lot of questions, but we’re going to save that for the 2nd act, because spreadsheets are for nerds, and because Dollinger went on an all time rant that deserves to lead.

(ED Note: the original Namaste 420 video was deleted in the purge, but High Energy Trading’s Taylor Gavinchuck (aka Taylor Nafasi, aka Taylor Jordan) had the foresight to keep thisclip.)

Sean drops the bomb that Namaste has been accepted to list on the NASDAQ (emphasis added).

Everybody is getting caught up in the share price, reverse consolidation, let’s not speak about that for a moment. Let’s talk about our accomplishment of being accepted to one of the largest stock exchanges in the world. And not only entering on the lowest tier, we’ve been accepted to the second tier, due to our requirements.

Don’t think that the NASDAQ just takes an application and takes a payment and they’re happy at the end of the day. They went through our books. They went through absolutely everything for six weeks. We’ve been working around the clock from the time that I went on your show and called out on our shareholders and investors for support, and… let’s get to that three dollar and fifty cent mark which, obviously, we’re far off from… (hard swallow)… I said “leave it to me, to get us approved on the NASDAQ,” that I believe in the lawyers, the legal team and our advisors that we will get approved. And that’s what I did, Mark. I went out. I listened to our shareholders and investors, and I got us there.

This is a clear departure from the company’s news release, which says that it plans to apply for a NASDAQ listing, not that it’s been approved. I was ready to cut Dollinger some slack for just mis-speaking in his enthusiasm, but he doubles down to make it clear and unequivocal: The company’s CEO is telling the shareholders that, instead of being so hung up on the price of the stock, they should focus on giving him some credit for the accomplishment of getting the company “accepted” by the NASDAQ, and their listing ‏“approved!” (bloody ingrates…).

Oh, Sean. You do make speeches.

Dollinger is good at talking lots and saying nothing. The rant continues through 26:38, and it’s epic. He makes a couple of different attempts to explain the difference between a healthy and unhealthy consolidation, but doesn’t really get anywhere, because he doesn’t understand the difference (20:28). It’s full of defensive excuses for why the stock’s down, and it looks like the backlash he’s getting from shareholders has him on tilt. The gist of his message is that he has a great team and that he needs your faith. Stay positive. “We ARE the most exciting company in the ENTIRE SPACE! And that’s what should be important to shareholders and investors!”

Towards the end of the soliloquy, Sean builds up his new CFO and the recently released financials, though neither Dollinger or Ngo do any substantive or even superficial examination of those financials.

Ngo’s appearance on this live stream is a clear message that the company is taking the criticism of their financial filings seriously. I pointed out in July that the quarterly Namaste financial statements from 2017 moved expenses around to suit their purposes and, for that reason, their gross profit and gross margin figures are suspect. This latest set include a re-statement of the parallel period of last year (3 and 9 months ending May 2017) which does some equally suspicious re-shuffling and re-classification. Stay tuned for another post on that because, if we go through it right now, we won’t have space to go over the rollback.

DJ roll that back for me! Maybe. If it’s necessary.

The Namaste faithful do NOT like the idea of consolidating the outstanding shares in order to get the price to a spot that qualifies the stock for a NASDAQ listing. The company is clear that it’s not a foregone conclusion, only something that they might do, because the natives were clearly getting restless in the live chat.

Dollinger tries to explain that a share consolidation is a neutral event that won’t effect the market cap of the stock, and that he’s willing to do it to get the NASDAQ listing that he’s deluded himself into thinking the company has been approved for, but mostly just talks in circles.

As a public service to Namaste shareholders, Fundamental Hype offers a plain-English explanation of share consolidations and what they mean:

Trade you six for half a dozen

If Namaste consolidates at a rate of 4:1 (for instance), they would then only have 68,949,390 shares outstanding and, assuming no other material changes or major market moves, those shares would trade for $5.36 each, and be above the price requirements for a NASDAQ listing.

Dollinger’s diatribe was unconvincing because the example he used of an “unhealthy” rollback was not materially different from the “healthy” rollback that the company is going to have to do if they want to list on the NASDAQ without first tripling their price. He had some energy company having to roll back from fractions of a cent to stay on an exchange like the venture because of price requirements, which is effectively the same thing as rolling back to meet NASDAQ price requirements. 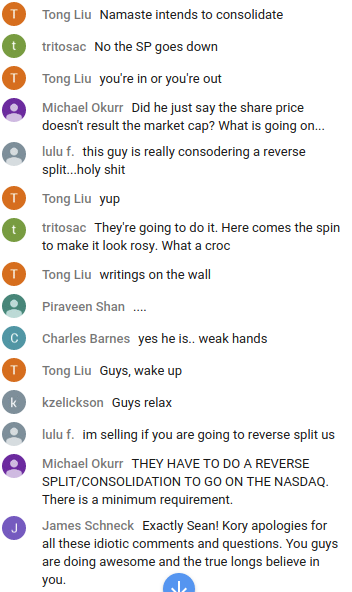 But after that, I’ll sell three dozen for a tenth of the price

The rollbacks themselves are never “unhealthy.” It’s the financings that tend to come immediately after them that make investors sick. It’s common in venture stage resource companies, who need to drill for whatever, but don’t have any income. These companies fall from fifteen to ten to five cents, doing financings all the way down, but fail to find anything that gives them any market traction. Eventually, they find themselves trading at $0.01 with 400 million shares outstanding and totally out of money.

So, after a 100:1 rollback, the company has 4 million shares outstanding, and is trading at a dollar. Then they raise $10 million at $1.00 from one or two different entities who become the owners of a 71% controlling interest in Nowhere Resources, leaving the the suckers true believers who rode it all the way down with a nominal position that represents a much smaller proportional ownership of the company than the day they put the money up. The investors that rode it down end up selling it for a tax loss because they’re stick of looking at it. (Asking for a friend…)

The questions in the chat shouldn’t be about whether or not they’re going to roll the company back, they should be about whether or not the company plans to finance any time soon. Namaste had $43.9 million in cash in May (Canadian dollars). That’s $8 million less than they had in February, but that was before they started paying lawyers and accountants to put together the recently approved (?) NASDAQ listing that Dollinger is so proud of.

I don’t know what a NASDAQ listing costs, but can’t imagine it’s cheap. There are undoubtedly more attorneys to pay, market makers, ratings agencies… GRIT Capital has limited reach in the States, so they’re going to have to hire an equivalent. It takes money, and allocating that money takes time.

Building the world’s premier digital “everything cannabis store” is an intense job. Dollinger does a lot of talking about his dedicated team. Is that team ready for the expanded workload that comes with a dual listing? With promotions running in two different countries? Counting the $4 million in revenue, Namaste burned through $12 million last quarter. A light cash balance doesn’t look good to investors on any exchange. It’s unclear how much cash Namaste needs to fund all the divisions they’re building out. There is a take-or-pay deal with supreme for 1000 kg of bud that’s going to cost $6 million by the end of the year, whether they are licensed to sell it or not.

Cannabis cultivation companies have different cost profiles than “everything cannabis stores,” but the N deck is comfortable comparing the company to top tier cultivators Canopy, Aphria, Aurora and Tilray. We’ll leave those cash balances here for your consideration.

Can Namaste afford this? Stay tuned for a closer look at their May financial statements.