In a Boxing Day video message to his subscribers, Namaste Technologies (TSX.V:N) CEO Sean Dollinger told the Namaste faithful that he was no longer going to be doing Namaste 420, the weekly web address and talk show that they tuned in to religiously, effectively cancelling the best show in small cap. The show’s archives have been removed and we haven’t yet heard anything from N publicly in 2019. Their most recent press release on December 21st addressed a product recall from supplier Bontify.

This type of silence is out of character for N who, on an eyeball-test count, average around one news release every three days.  That silent week following the expunging of the N420 archives saw a volume spike for N, and a 30% spike in price; the stock clearly getting up off the mat from $0.80, finishing the New-Years-Day-shortened week at $1.14 on terrific volume. With no news, it’s hard to attribute the performance to anything other than the out-loud disappearance of this consistently embarrassing show.

N420 didn’t jump the shark, it just got too good at what it did best

The Namaste Nadir came in the days following the release and quick deleting of what would end up being the last Namaste 420 video on Dec. 19th. A possibly jet-lagged and particularly defensive Dollinger discussed his travel plans and how he and his team “literally bleed for this company,” apparently unfamiliar that the word “literally” can’t be used in a metaphor (but possibly losing blood). He explained in his trademark “y’all-just-don’t-get-it!” tone that the he isn’t going to stop doing the show, no matter how many people ask, because it was important, and “if you don’t like it, don’t watch.”

He then went live via google hangout to Meni Morim, founder of Findify (Namaste’s AI project, which sounds a hell of a lot like the algorithm that Amazon uses to gauge what their visitors “may also like”) who had that day been promoted by press release to the position Chief Product Officer, but ostensibly not to the board of directors. These two tech executives spent about 15 minutes sharing the wrong half of the google hangout screen with their viewers as they went through what seemed like an audition for a board seat for Meni, who intimated that he had better offers for Findify than the $11M in stock that Namaste gave him in May (doubtful), but took on N stock because he believed in it. Towards the end, our notes indicate that Sean told his audience he “can’t wait until they find out what we’re really up to.” Us neither.
The whole thing only lasted 20 minutes and came off like an abysmal train wreck. It was deleted within 24 hours, but the rest of the catalog didn’t disappear with it. There was a period following the deletion of the Dec. 19 video when the bulk of the N420 work remained up, an N was in a high-volume free-fall.

To be fair, so was everything else. The major markets were in the middle of a year-end collapse, the US Treasury Secretary was throwing gasoline on the fire by assuring the public that the banks had liquidity, even though nobody asked. Namaste isn’t immune to trends. But the faithful in the youtube comments and CEO.CA forums were having trouble finding the handle. Even the biggest fans hated those last two videos. They made it look like Sean had finally lost it.

To make matters worse, some know-it-all spreadsheet junkie steamrolled the place, making an obnoxious case that Namaste’s main problem is not being able to get out of its own way. 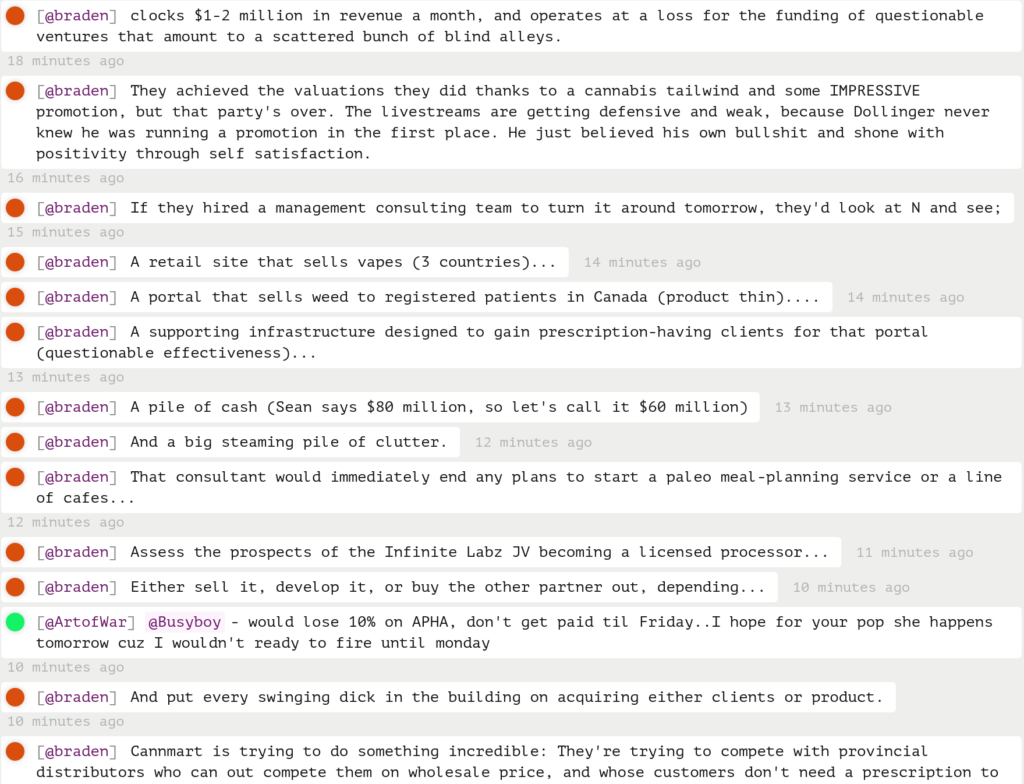 Cancelling Dollinger’s show took care of one loose cannon, here’s the next two:

The program switch almost certainly wasn’t Dollinger’s call, so shareholders wearing this thing might be optimistic that whichever adult managed to change the youtube password will be able to instill some focus. N has money and revenue, but has a few hurdles to overcome before becoming something that doesn’t just pour money down the drain.

N’s revenue is steady, and there’s no reason to believe they aren’t giving it to us square. but these guys juggle expenses like they’re flaming chainsaws to show a consistent gross. Namaste pushed its year-end quarter forward, likely because having it follow the Christmas quarter gives them a shot at having enough sales to absorb the year-end inventory write-downs that auditors are going to ask for before signing off. Audits are easiest to do when correctly timed, and a good Christmas quarter would give them a lot more room to line those chain saws up in a way that doesn’t cut anyone’s hand off.

By Namaste’s un-audited calculation, the vape business does a 20% margin on a trailing 12 basis. “Your Everything Cannabis Store,” is going to have to do a lot better than that to get a cannabis company valuation. Most LPs run at 50% – 60% margin. Namaste’s cannabis selling venture, an LP called Cannmart that doesn’t grow its own product, but re-sells product that it has bought from other LPs, sells a meager catalog to people who have a prescription for medical cannabis. Acquisition of the Buds2Go domain and the traffic that goes with it figures to increase patients and sales, but so far we’re not seeing much in the way of patient updates.

In the past month, Cannmart has been able to broaden their selection, but mostly by offering weed in different quantities. A scrape of their catalog on Nov 21st showed only 23 unique SKUS, 9 in stock, representing 16 unique strains. A subsequent scrape Jan 2 showed 30 SKUs, all but 2 in stock, but still representing only 18 strains. Most of those strains are available at provincial LPs without prescription. It isn’t clear if the few strains that are unique to Namaste are materially different to the dried marijuana flower that is widely available to consumers from the provinces, or from black market sites. If this is going to work, it’ll need some juice.

Successful retailers are built around popular products. Since N isn’t a position to compete on selection or price, they need to come up with the marijuana equivalent of a killer app. Presently, despite what they might tell you, innovation isn’t in N’s DNA. Sean’s mistaken belief that it was is what got them in this jam in the first place.

The spending spree that Sean went on before someone took away his credit card didn’t yield much that plugs into that core retail business. We don’t rate Findify, and the stake in cannabis delivery startup Pineapple Express figures to cost them more money long before it makes them any. The best theoretical development avenue is Infinite Labz a yet-to-be-built-or-licensed cannabis processor in Etobicoke, ON. N bought a 51% stake in this company, which in May of 2018 “intend(ed) to submit an application to become a Health Canada Licensed Producer (“LP”) of medical cannabis oil, with the intention of resale to both the medical and recreational markets.”

It doesn’t say what they agreed to pay for their stake, but they did front $750,000 to IL to build the facility. No word on how far along they are, but a few updates on that project going well and being licensed would make N look like they were closer to becoming something that resembles a vertically integrated enterprise – something that makes the stuff that people put in the vapes they sell, then sells it with the vapes. Being product-forward is all the rage, and a few pressers about that direction would scan better than an app that finds the nearest cannabis-friendly yoga studio or whatever.

But none of that will make up for them cancelling my favorite show!

This is obviously an enormous loss of resources for snarky market bloggers, and that’s surely the whole point. Those videos were a bottomless well. Dollinger would ramble out broad misunderstandings about market mechanics, securities law and general business with total conviction. He frequently lied, famously when a plan to apply for a NASDAQ listing snowballed into a full-blown approval, and more recently about Shopify not allowing Cannmart to take payments for CBD oil.

Classic clip of Sean Dollinger lying about Namaste being accepted to the NASDAQ.

But it was all in service of the company, and that wasn’t lost on shareholders. Th N faithful defended their king in droves. Even when our reporting called out Dollinger’s bullshit blatantly and obviously, they’d fill the comments section with impassioned equivocations about how hard the guy works, and the market cap he’s achieved. They’d lament us as “shorters” and “bashers” who “just hate Namaste!” and are jealous! Because, in a grand and terrible paradox, despite frequently lying, Sean Dollinger was very genuine.

I rarely missed an episode of N420. I kept notes of interesting comments that might come in handy later. There was enough there to do rolling meta coverage, but it wouldn’t leave much room to write about much else. The week-to-week minutia wasn’t worth it, but the body of work was spectacular. We’re legit sorry it’s gone. As near as I can tell, it was the first time that type of direct-to-consumer IR had been tried on that scale. The principle is a sound one, and N owes no small part of their success to it. Hopefully, N420 will become a proto state, out of which an evolved access-IR product will emerge, featuring a host that isn’t insufferable and one dimensional.

I’m going to miss you, Sean.