It’s hard to fathom what took Namaste Technologies (TSX.V:N) so long to release these financials.

There’s nothing complicated or convoluted about these statements. Namaste is the same waste of energy it has always been: a basket of half-developed assets wrapped around an underwhelming E-Retail business that refuses to scale.

The simultaneous release of six moths worth of new financials and the auditor’s approval of a full fifteen months worth of statements ending November have given us a chance to update our spreadsheet, and bring you all an illustrated look at Namaste Technologies. Let’s start right in the guts: 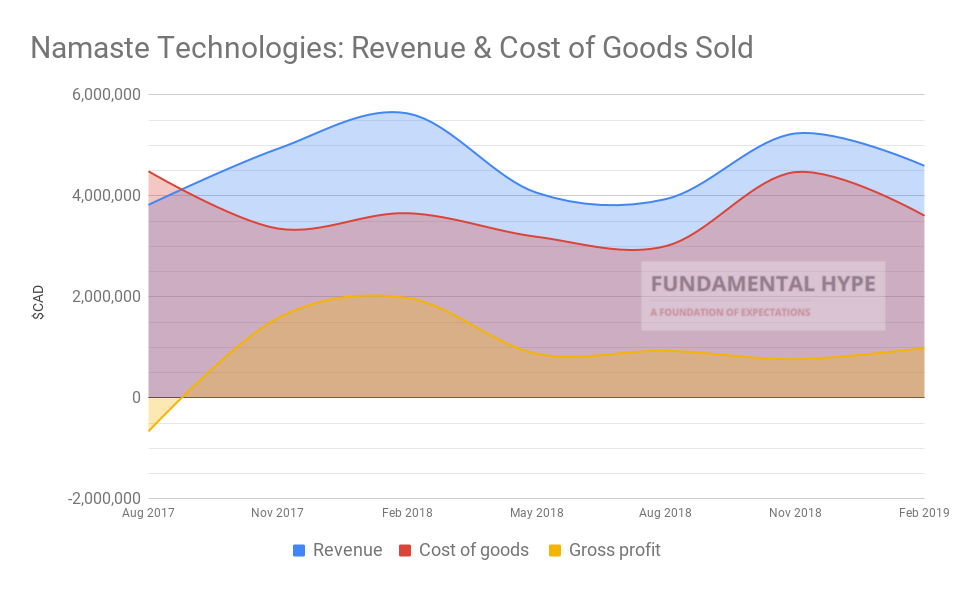 The “most exciting company in cannabis” sure looks pretty boring when you stack it up against itself and look at the top-line. It just meanders along sideways. The long, loud, drawn out process of plugging actual cannabis business CannMart into “your everything cannabis store,” doesn’t appear to have done much for their sales, and they’re still waiting on that platfom-wide bump from the AI engine that’s going to change E-Retail, Findify.

The vapes businesses out sold the cannabis division division badly over N’s 15 month year ending November, amounting to only 1.3% of the total vape + weed sales in that period, but that’s to be expected: They only got the cannabis license in September 24. 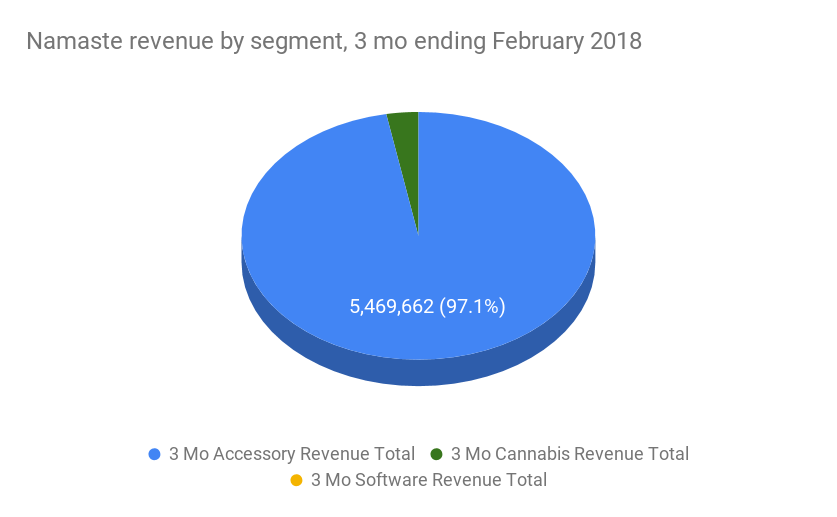 Stacked up against each other for an equal number of days in the three month period ending February, Cannabis managed to sell 2.8% of the vape department’s total. Curiously, Findify and patient acquisition / medi-marijuana concierge app Namaste MD suddenly booked no revenue at all in the quarter ending February, 2019. So how come they’re not slanging? What’s going on?

A closer look at Cannmart

We were tempted to take Cannmart seriously when they inked a take-or-pay deal with Supreme (TSX.V:FIRE) in January of 2018 that bound them to taking 1000 kg of flower from Supreme’s popular 7 Acres line in 2018 at $6,000/kg, making it a fair bet that they could move at least that much, but no-such luck. N is now in a dispute with Supreme over not having taken delivery of their number. The agreement was the only one of N’s many deals that contained a binding cash commitment, and the only brand name anywhere near them since Tilray (NASDAQ:TLRY) split over the sexy nurse / bagholder pledge party. Having it fall apart is a bad look.

The Cannmart site itself is a tough thing to figure

The scraper that we use to track retail product availability in our War for Shelf Space series pulls the Cannmart catalog just fine, and we scraped it right along with the provinces as we went. On November 21, they had 23 products listed from a 4 vendor mix, including their store brand. Respectable. 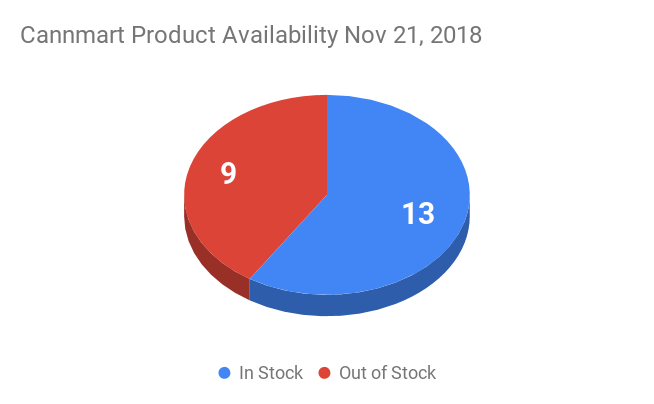 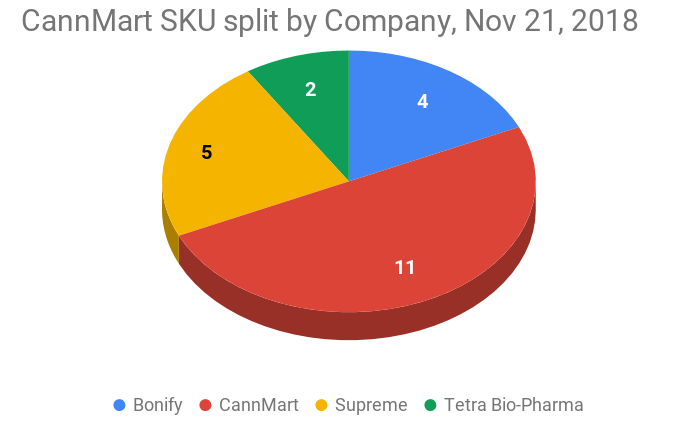 We scraped it again Jan 27 when we fired up the machine for War for Shelf Space Pt. 2, and cannmart looked even better. 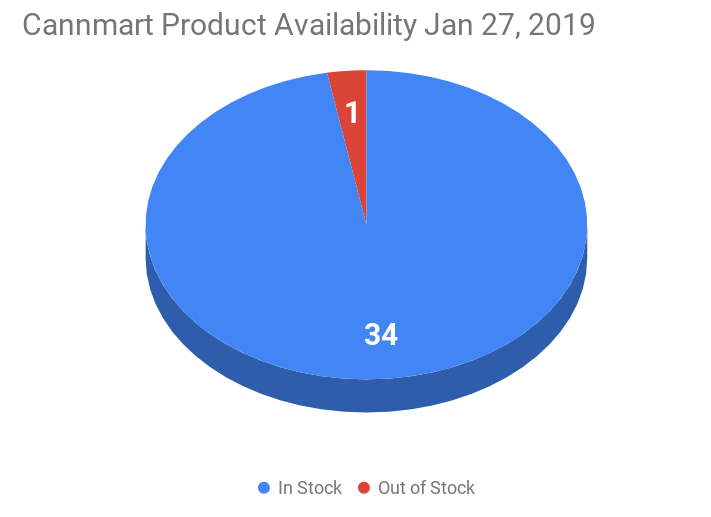 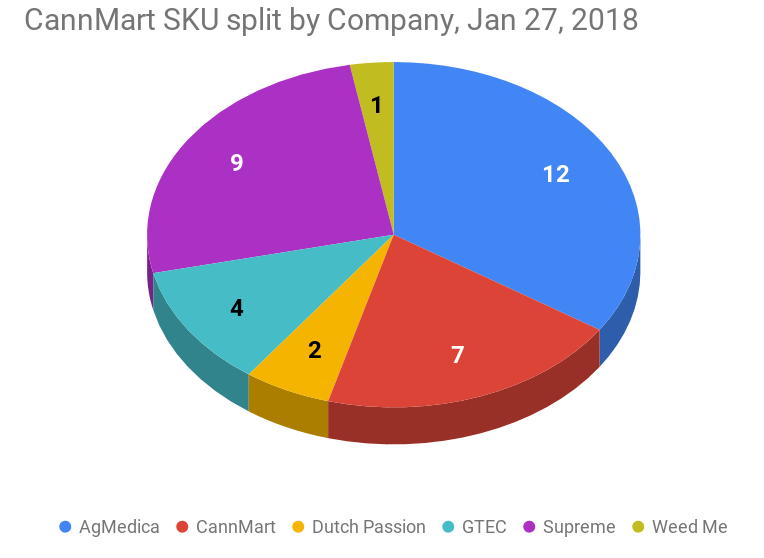 They had grown their product mix, added a few new suppliers for variety, and everything but one Supreme strain was listed as in-stock!

At the time, the provincial portals were looking pretty dry, and we wondered whether or not N may have a secret advantage by being able to supply while the provinces couldn’t…  but all N could manage to generate for news was an on again / off again relationship with former CEO and YouTube Live LEGEND Sean Dollinger, getting fired by their auditors, and an inability to file their statements on time.

A scrape of the Cannmart catalog run yesterday returned 83 listed cannabis SKUs from eight vendors including the house brand. 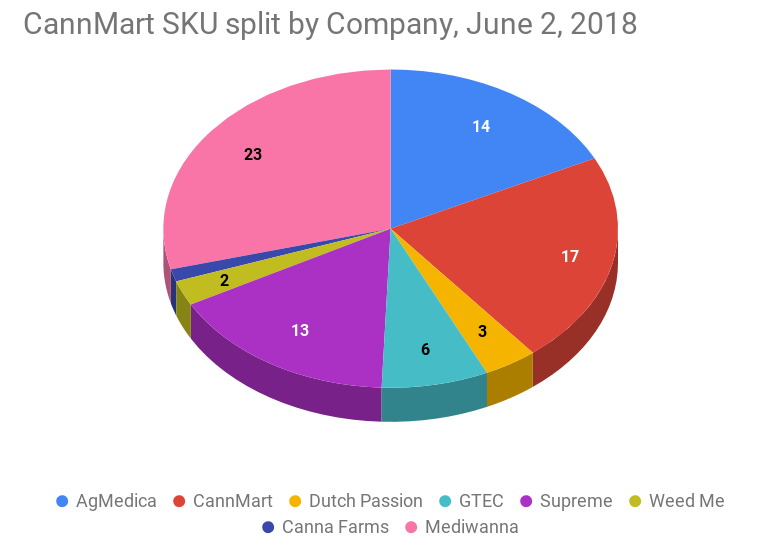 But the availability numbers had our data senses tingling. 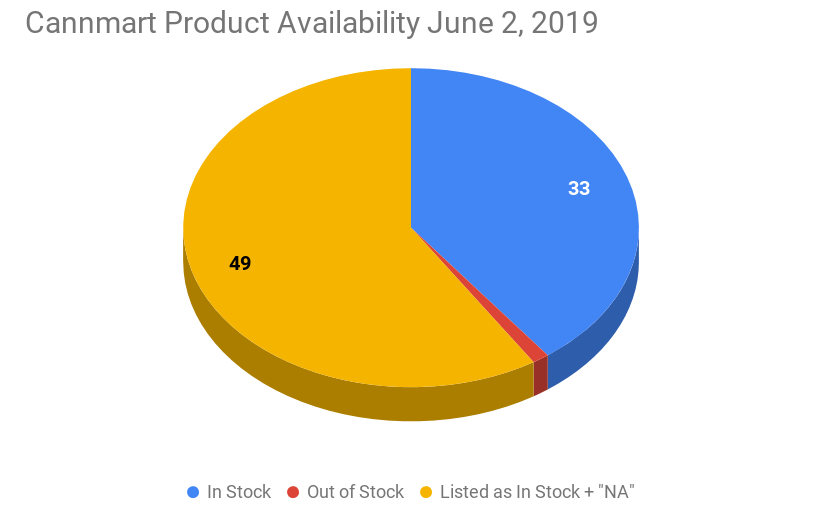 For the second scrape in a row, all SKUs were listed as in-stock. That’s either a mistake or an indication nothing is selling.

A close look at the catalog data showed “NA” written in the variant field of 49 of the 83 products, right along the quantity designation that is supposed to appear there, which may indicate that they’re keeping track of product outages in another way. We logged in to see if the web-facing UX would tell us in-stock or out-of-stock for any given product – expecting that it would at least demand a prescription – but all we ever got a was a login loop (“log-in to buy.” “You’re logged in!”, “log in to buy,” etc.)

Namaste veterans will remember when the Cannmart “sales only” license was the one missing piece that would make N the “Amazon of cannabis.” We were more than skeptical at the time about the prospects of the prescription-gated re-sale of medical marijuana as an online business. The larger LPs do it, but mostly to legacy patients who have been with them since the beginning. The era of prescription-free online retail being managed exclusively by the provinces started a month after N was granted their license, and we couldn’t fathom why anyone would want to jump through prescription hoops to be mailed some bud if they didn’t have to.

Namaste’s financial statements for the period ending May 31, 2019 are due to be filed July 15, 2019, and $164k worth of cannabis revenue will be the number to beat to show growth.

But they must be doing SOMETHING right… 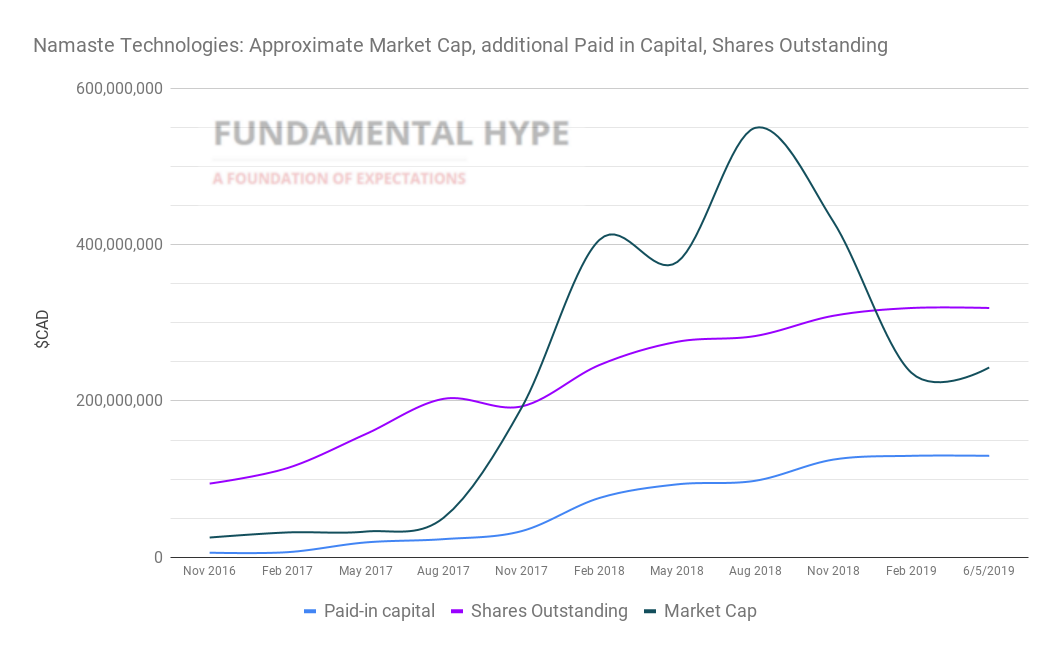 Despite six months worth of abject turmoil and having been teed up on by every snarky blogger in the country, this glorified Shopify store and basket-case full of half-made ancillary cannabis businesses presently has a $225M valuation, and is sitting on about $60M in cash with no debt. In the next episode of Namaste by the Numbers, we’re going to have a closer look at the capital structure and what needs to be done if this thing is going to be turned around.

CORRECTION: A previous version of the pie chart of Cannmart’s June 2 product availability showed the products marked NA as an added category of products, distorting the totals. We’ve fixed the graph to reflect a total of 83 cannabis products in stock, 82 listed as available, 1 listed as unavailable, and 49 marked “NA”.