Last week, the ever-sharp and patient Mark Spear pulled a quote from Canopy Growth Corp. CEO Bruce Linton (TSX:WEED)(NYSE:CGC) out of an interview he did with TheStreet.com’s Jim Cramer and Constellation Brands (NYSE:STZ) President Bill Newsome following their teaming up last year:

So why would I buy the asset, when I can actually acquire the inventory later, cheaper, if they don’t have the distribution? Everyone wants us to consolidate everything, but we don’t need to, because it’s going to disintegrate.”

Spear showed Buddy Rich-like timing dropping this one right ahead of the hotly anticipated Health Canada announcement of the new rules for edibles and extracts this past Thursday. Health Canada hosted a conference call for the release, which has been well covered elsewhere, and somehow allows for a full gram per package of THC in topicals, but only 10mg in edibles.

As the anticipation for edibles legalization has been building for the better part of a year. An industry full of mega growers, still losing money a year into legalization, while they “scale,” have been bemoaning their competitive disadvantage vs. the black market for the lack of ability sell a full range of products.

Constellation’s money would certainly buy a great deal of wholesale product. If any of Canopy’s 10,000 kgs of sales in Q4, 2018 were wholesale buys from other suppliers, Canopy didn’t mention it. Competetor Aurora – #2 in unit sales in Canada – outsourced 18% of the bud and oil they sold in Q4 2018, and 13% of it in Q1 2019. We’ll find out what Canopy sold in Q1 when they release their quarterlies this coming Thursday. We don’t expect them to address outsourcing. 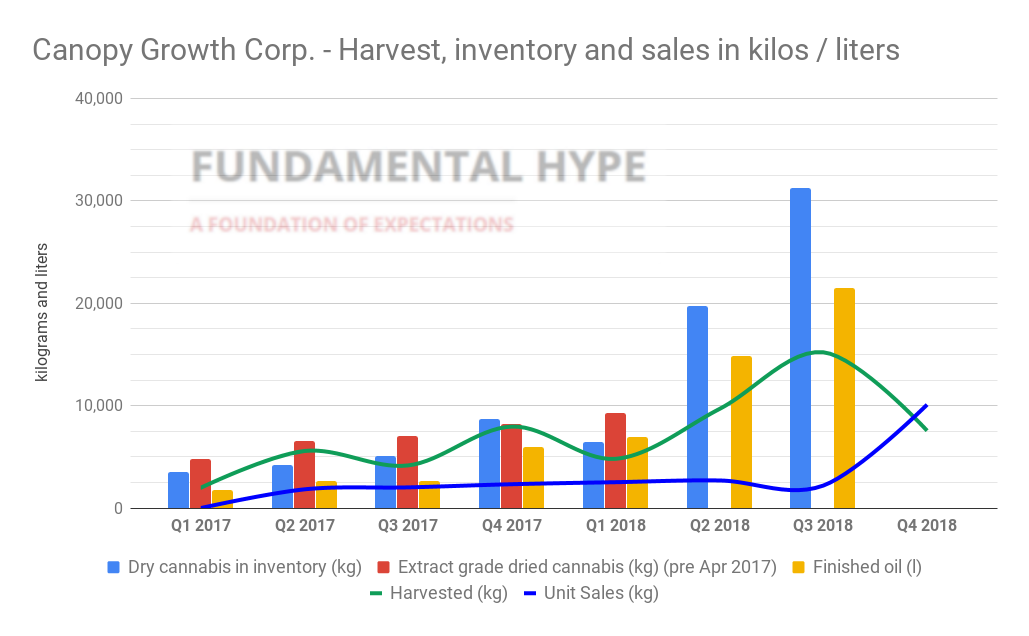 Canopy tells us less and less about their pre-sale weed. In March, 2018, they quit showing us a split between smokeable flower and extract grade flower. Then in December they quit publishing inventory splits of any kind.

Meanwhile, Health Canada data is showing a pronounced growth in finished inventory that isn’t being tracked by a growth in sales. 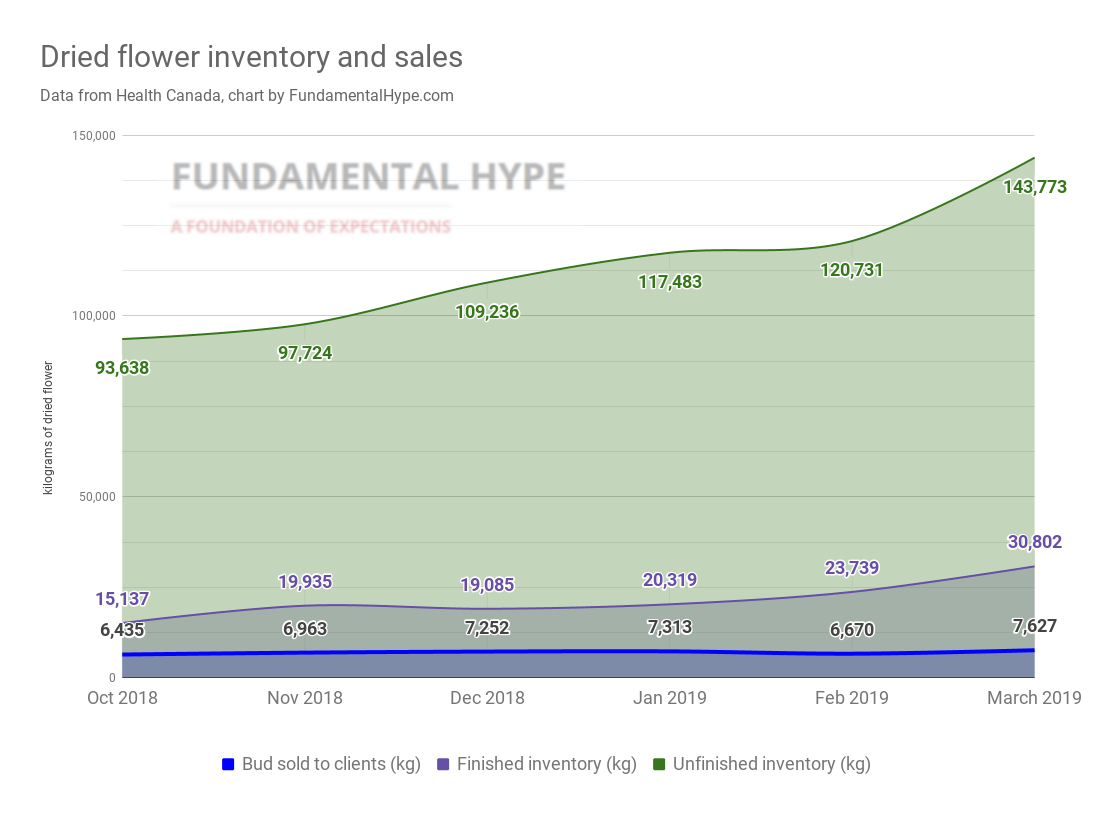 And, so, it’s coming up on a time that The Linton Prophecy of 2018 may come to pass. There’s a gult of bud out there. It is frequently blamed on unspecific grumbling about distribution, but it exists. A glut of bud that Canopy can take down “in a predatory manner” like a hawk making a kill on a big, fat, lazy pigeon. But the sharps know better.

He should know a thing or three about writing down inventory. Last two Q4’s has written off $20 million each year. This year has written down $20 million in bio assets through 3 Q’s. Maybe he is just practicing to do it to others later. ?

Inside this sick burn by The Cannalysts‘ GoBlueCdn is a bit of context about the inventory that Canopy is going to tell us about on Thursday. $20 million is 15% of their sales for those periods. It doesn’t inspire confidence about the quality of the stuff that’s left over.

“We have no idea what the hell we’re doing. Instead of acquiring companies who can grow cannabis at scale without massive cash burn we have opted to continue to burn cash until there’s an excess amount of cannabis to acquire for cheap. Here’s To Future (Low Harvests) Growth.” 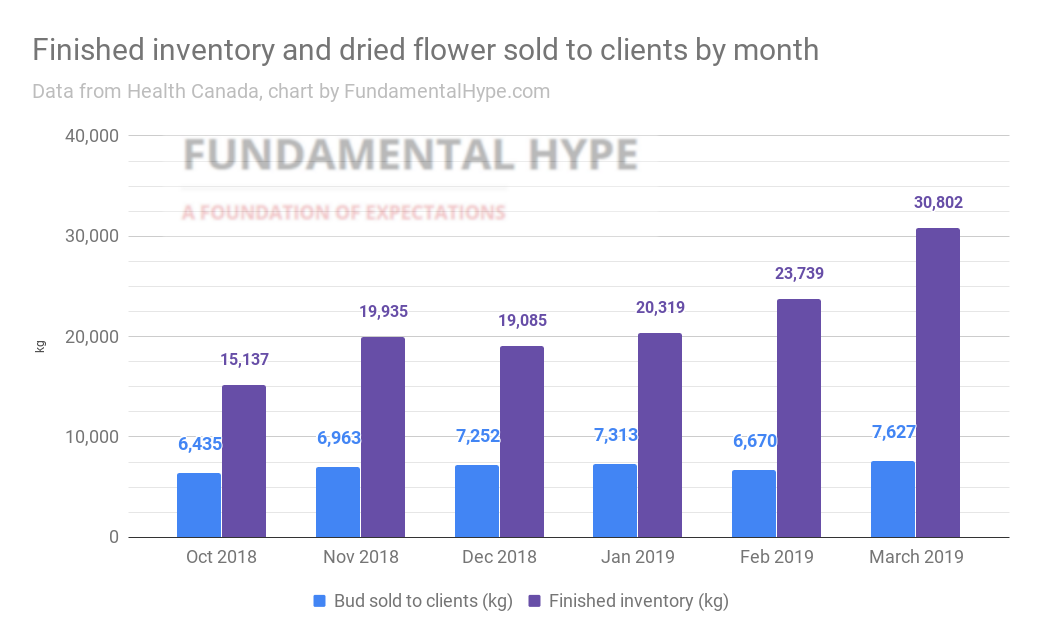 If we take away the unfinished inventory, it’s clear that the inventory is growing at much quicker rate than sales since legalization. Both for the aggregated period: 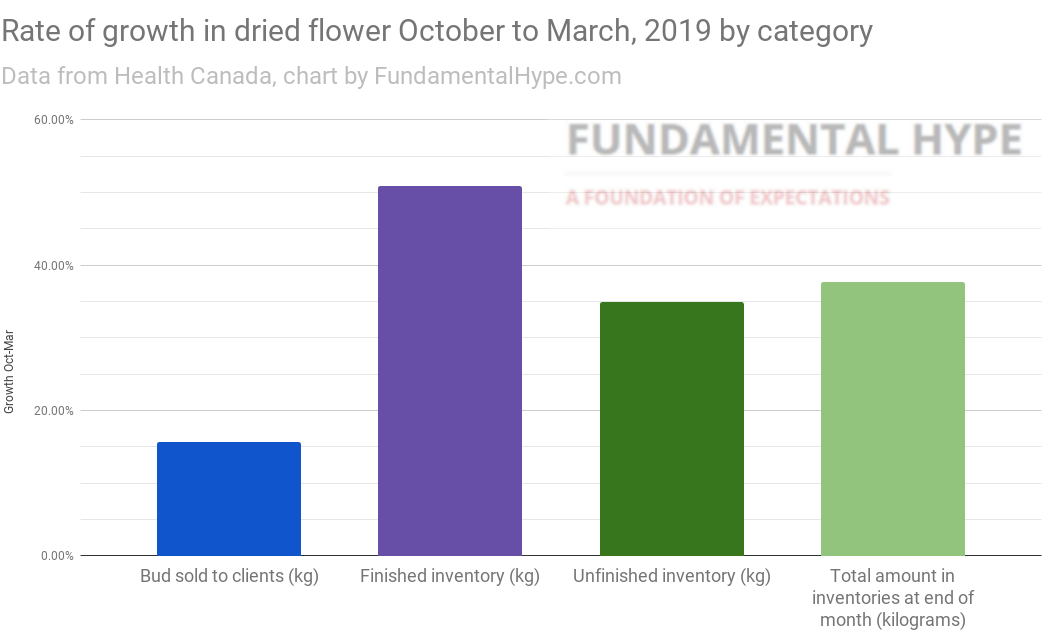 …And month by month. 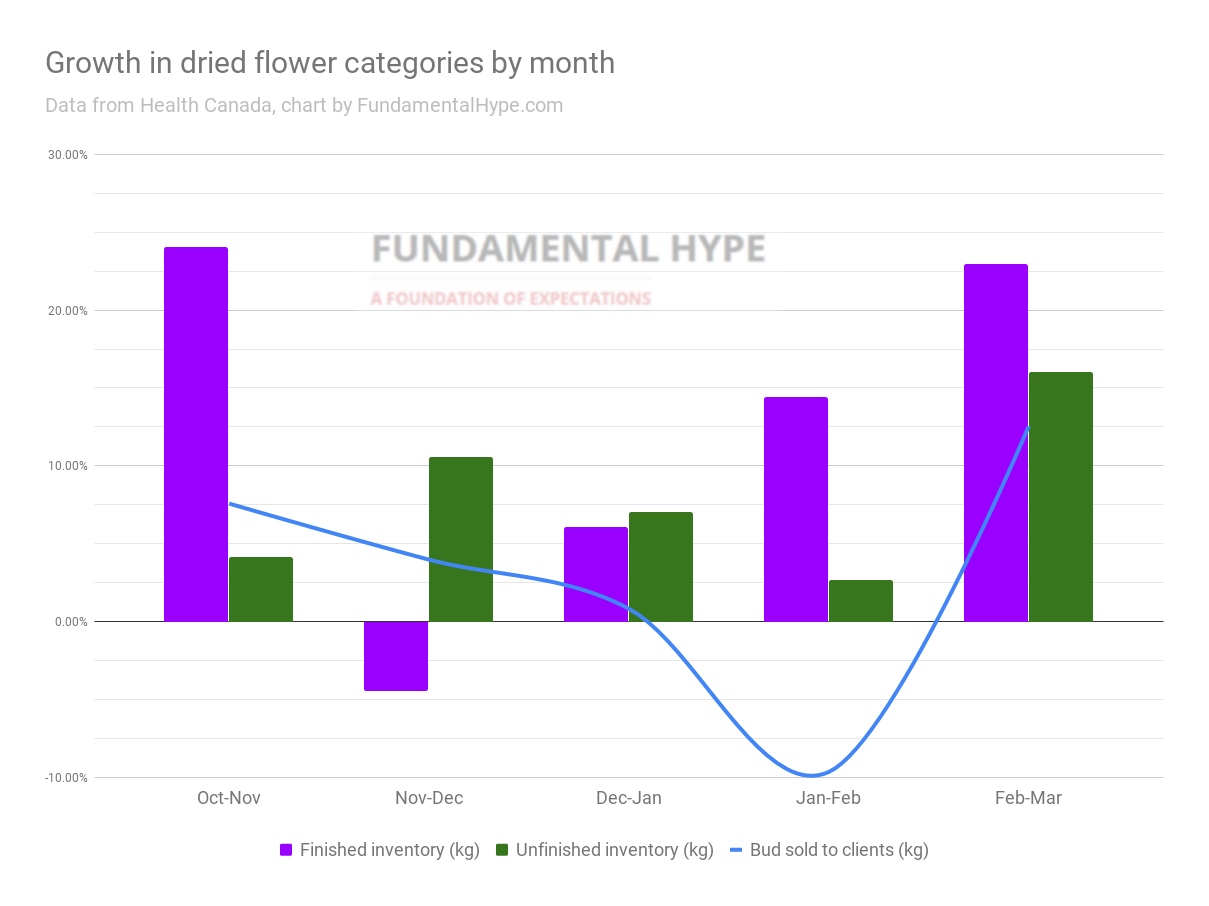 If, in fact, much of the flower being produced and finished by Canadian LPs is un-smokeable trash, it would manifest as a sales and inventory profile much like this one, and the MJ business sect would be un-naturally interested in ways to upgrade and sell marijuana byproducts, like edibles and extracts.

Did you know that 42% of all statistics are made up on the spot?

Barron’s Bill Alpert ran a Q&A with his most frequently quoted industry expert Owen Bennett of Jefferies Financial Group June 7th, in which Bennett was optimistic about the prospect that edibles and extracts would help out the Canadian producers that his firm is shilling for, and he’s got the data to back it up:

“The best template is the U.S. states where it’s legal, where 40% of the market is dried flower, and you’ve got 60% that is derivatives, by which I mean edibles, beverages, and vapour. Vapour is the dominant segment in that space.”

-Owen Bennett of Jefferies Financial Group, as quoted in Barron’s.

Bennett doesn’t say which state he’s using from this “best template”, or if what makes it the best is the fact that it confirms his desired outcome, and that’s why we don’t trust un-cited data. 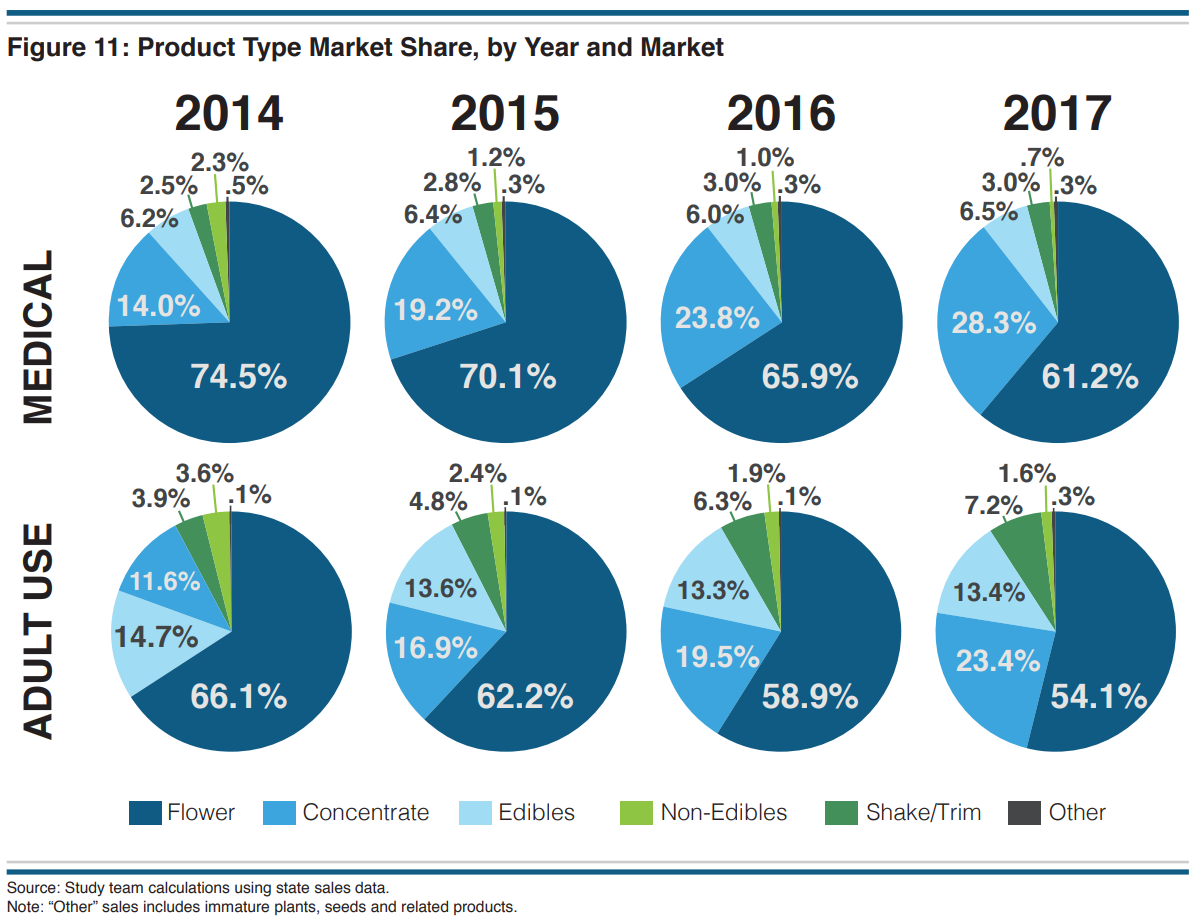 Colorado is the most mature US market. After parsing the government sales data, the people down at the University of Colorado have flower occupying a strong majority of both the medical and adult markets through 2017.

BDS Analytics shows similar majorities in Washington, Oregon and California, all early adopter states with strong marijuana cultures. Note that BDS has split off pre-rolls which, from a cultivator’s perspective, are flower weight. 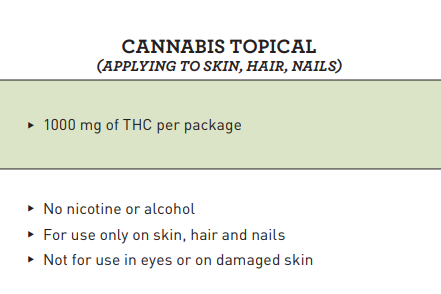 200 licenses producing so much shwaggy bud that they have to sell it in skin cream may be a product of the fact that, so far, Health Canada has only issued 180 licenses. 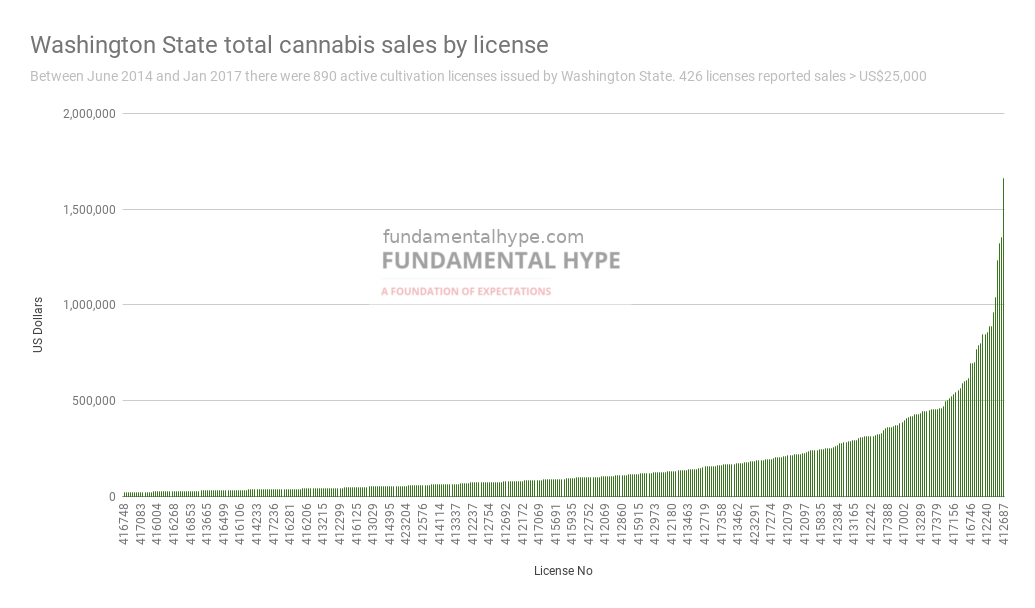 We ran this chart in our 4/20 post about the underground marijuana economy and Cypress Hill. In Washington State, 3 years into legalization, only a few of the 890 licensed cultivators had really got the hang of it. 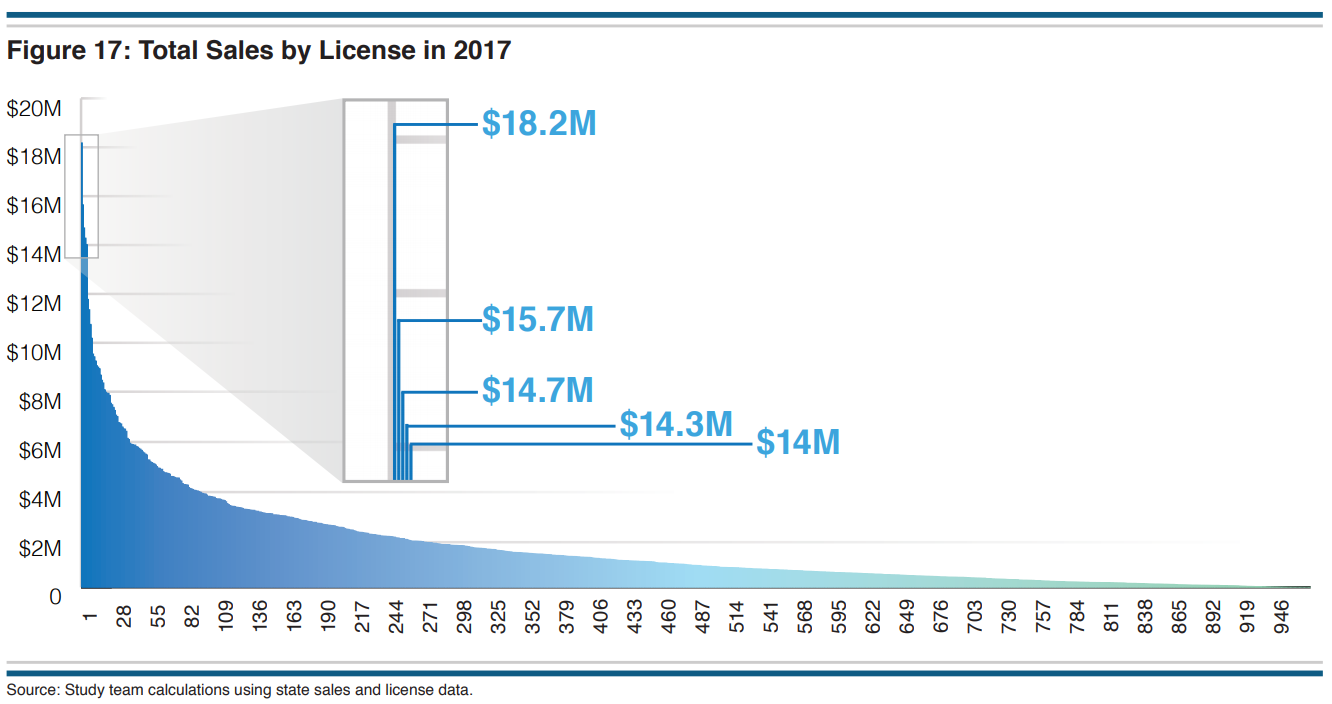 It turns out that the University of Colorado data team also drew up a chart of sales by individual licenses, and found something similar.

In the context of the fact that extract-grade cannabis – the kind that’s only going to sell if it’s drowned in chocolate or teat tree oil – is much easier to grow than kind bud that people want to smoke, Bruce Linton may have been right. Canopy will likely be able to buy all of the shwaggy bud they can handle. Some time around next spring, we’ll begin to get a handle on how it sells.

For equities investors who pick stocks based on business fundamentals, we’ve arrived at the root of it. The ability to grow flower – the highest value and largest share of the consumer market – is not evenly distributed. There are bound to be organizations out there capable of out-classing their competition by a wide margin.