A mass bloodletting in the cannabis space appears to have reached its peak yesterday as now former Aurora Cannabis CEO Terry Booth handed in his resignation to kick off an epic of a news release that was simultaneously long expected and widely shocking.

Aurora Cannabis (TSX:ACB)(NASDAQ:ACB) announced that under the new leadership of Executive Chairman and interim CEO Michael Singer, they would be cutting SG&A costs, curbing capital spending, and laying off 500 people in the process.

Extensive coverage over at CLN has outlined the fact that even the most dramatic cuts to operating costs aren’t likely to put Aurora in the black, and throwing water on the out of control fire that is their capital spend amounts to a tacit admission that the facilities the company had planned are in no way realistic.

The third chapter of the release featured the new Aurora regime promising to quit making promises. The company gave investors and an itemized list of guidance they could no longer expect from Aurora, including covenants about their EBITDA ratios and their their debt-to-equity ratio (going down from .25:1 to .20:1).

Within the list, they made some new promises, seemingly aimed at maintaining the company’s solvency, including a reduction of the total available credit by $141.5 million. The reduction comes four months after increasing the total credit available through long time banking partner BMO to $360 million.

On September 4, 2019, the Company executed an amendment and upsizing of its existing C$200.0 million Credit Facility to C$360.0 million.

Aurora has also announced a number of amendments to its secured credit facilities which are designed to better align the Company’s balance sheet and cash flow expectations with current market conditions and to provide financial flexibility over the near term. These amendments include … [a] reduction of the total facility size available by $141.5 million. 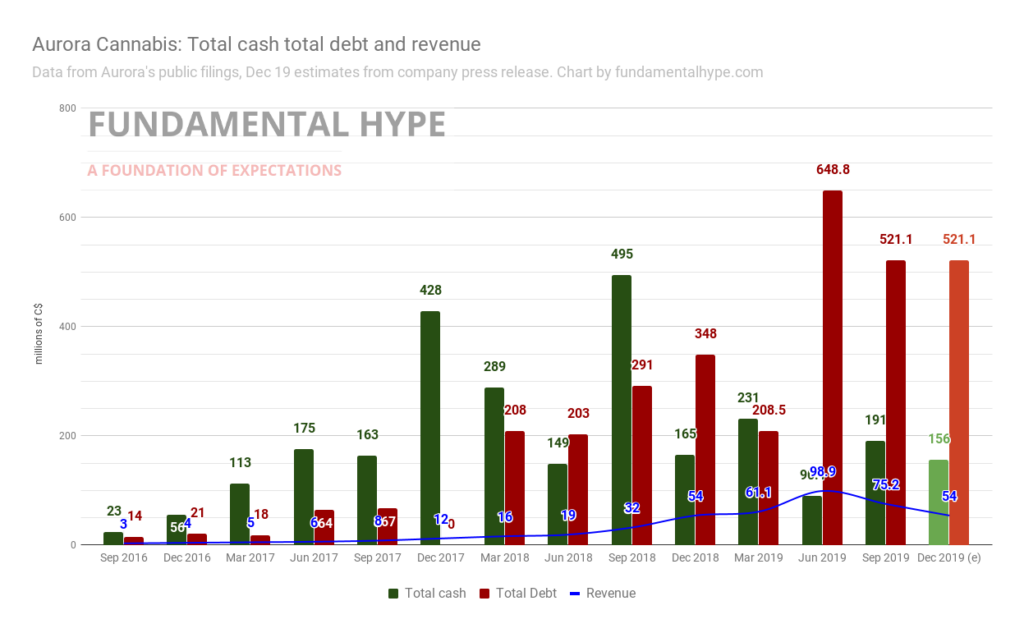 The sudden allergy to leverage telegraphs a shift towards a more conventional and austere attitude in Edmonton, but the raw and current essence of the balance sheet that we’ve helpfully charted above with the company’s revenue is giving us trouble buying that shift as anything more than an idea. The nominal purpose of the shakeup is to have Aurora show positive EBITDA by October of 2021 but, frankly, for reasons well-discussed at CLN, it strikes us as theatre. There’s very little evidence that this business ever considered the prospect of being cash positive.

After having covered Aurora for more than two years, the company only makes sense as a leveraged portfolio of cannabis assets. Almost a year ago, Fundamental Hype wrote a summary of Betting Bruiser’s report on the portfolio of interests in smaller cannabis co’s and ancillary co’s that Aurora marks to market quarterly. Aurora keeps their positions liquid and sometimes make themselves look savvy for having unloaded problem children like TGOD before their collapse becomes total. In its depleted September 30th state, the equities portfolio is worth $46.8 million. A mere three moths prior, its book value was $393.5 million. 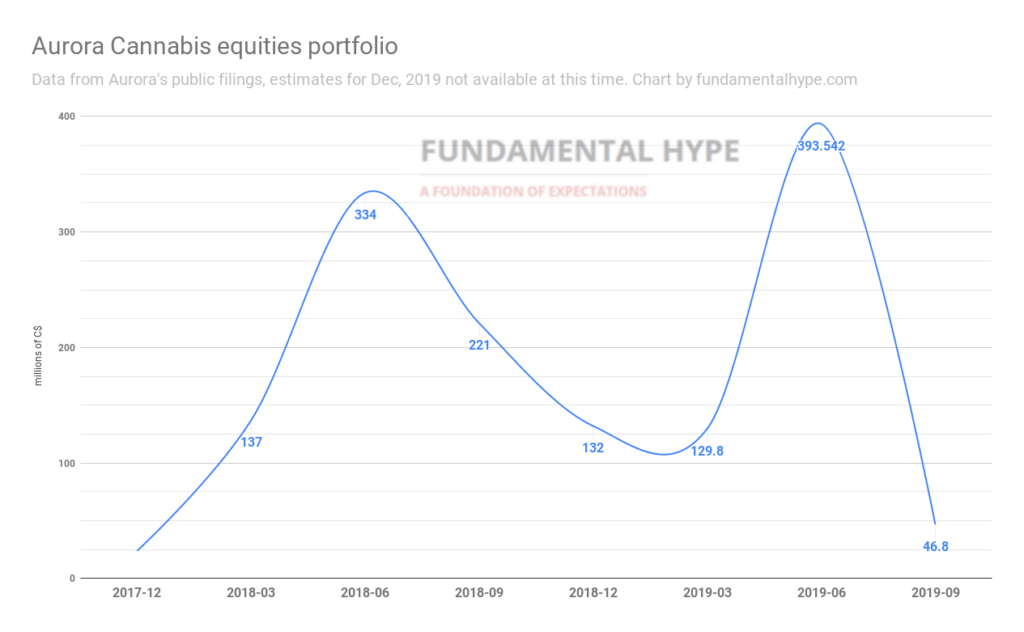 Aurora’s identity crisis comes as the ACB stock price causes an inversion on the chart we’ve been keeping of their progress as a champion bull rider, plotting a clear fall off the bull. 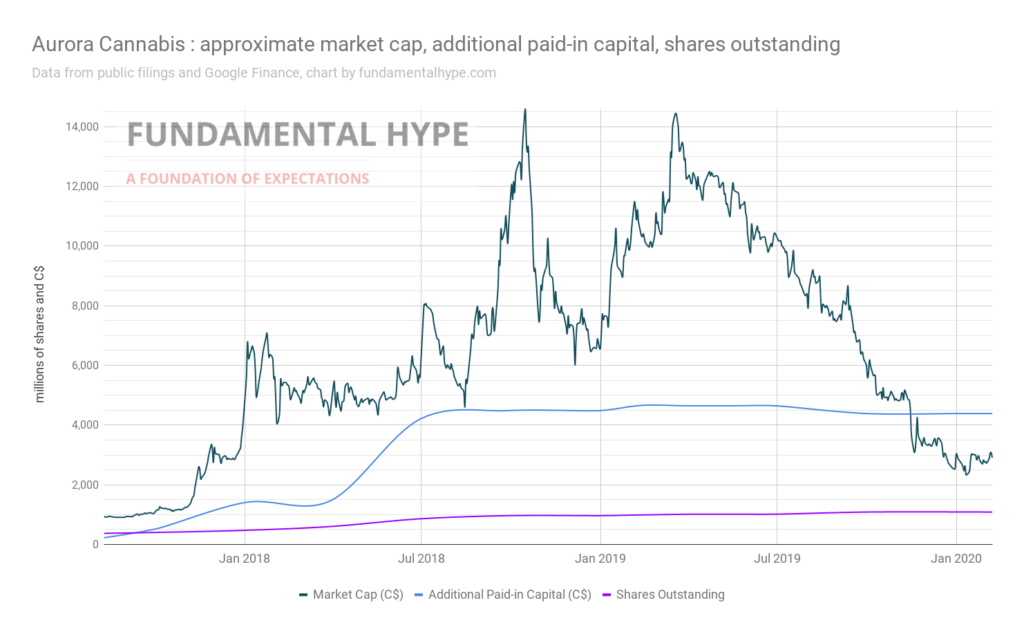 And it’s reasonable to assume that any of Aurora’s peers who haven’t yet suffered a similar tumble soon will.

The AMCPR licenses granted to Canadian mega growers are effectively components of asset portfolios owned by listed hedge funds, tasked with arranging them in ever-more creative combinations and alignments to get a lift out of their equity. That’s a natural state of affairs for early stage businesses who are going through build phases. But when this entire industry started as ventures, awash in cash from a financial sector whose participants know EXACTLY what to do with a compelling story, it quickly became apparent that the prudent but aggressive growth that builds solid businesses wasn’t the ticket.

Both attempts at developing industrial cultivators of quality products in companies with tight cap tables and solid balance sheets – MedreLEAF and Cannimed – were subject to aggressive takeover offers from Aurora, who was intent on using every ounce of the weight of their equity and all of the room on their balance sheet to become a cannabis juggernaut on paper. And, on paper, for a time, there was no arguing with Aurora’s success. But in the words of Matthew Mcconaughey’s character in the Wolf of Wall St., it’s “not real. It’s fairydust… hasn’t landed.”

It isn’t absurd to imagine that Aurora might care to own some of these smaller businesses and integrate them with their cultivation operations vertically, but Aurora made no known attempt at integrating even the businesses whose interests they do consolidate.

ACB shareholders who might have laughed coffee through their nose at the notion that Aurora, who has lost 77% of its equity value over the past 10 months, is a financial markets success may be out of the fact that it just isn’t a success for them.

Who won at Aurora?

Aurora Cannabis distributed stock-based compensation valued at $24 million in Q3, much of it to the executives pretending this collection of mismatched parts is a business, and nobody is saying they didn’t earn it. Stock received as a wage is (obviously) more valuable the better the stock does, so there can be an argument made that the executives took one on the chin. But the real money here was made in the financing. More to come on that.