Helluva ballgame here in the early innings of the US Marijuana rollout, and it’s high-time we gave everyone a look at our scoresheet. First, though, we’ve got to have a talk about class.

In our Epic Poem about the MSO Man (with apologies to the late Tom Wolfe), Fundamental Hype pointed out that this is a retail trade through and through. The institutions can’t even touch this stuff, certainly not in the US. Much of it isn’t even DTC eligible. Retail stock promotion has a way of bringing out some tacky garbage, and retail investors – god bless them – have a comical way of being sucked into slumming it in that tacky garbage.

There’s no shame in observing this circus, because that’s mostly what it’s good for, and for those inclined to trade it, well… it’s your money. But the bottom tier of this market is not investment grade material, and we’re not inclined to treat it as such. When a symbol starts trending among lifestyle-marketers and pay-per-pump whores, it isn’t because they carefully weighed the potential relative to the risk.

Walking the tightrope is pretty hard… Are you sure you want to try it riding a cow?

All marijuana stocks are growth assets that carry related equity risks. They are all venture-stage growth businesses that mostly lose money in an attempt to capture a share of a new market that isn’t yet built out, and exists at the behest of regulators. The ones at the bottom of the development curve don’t have a larger upside relative to their risk, but there’s a whole industry trying to convince retail money that they do. There’s always some kind of flashy catalyst framed as something that can jump some raggedy pump job across a value gap before you know it; a “brand” that looks like it’s going to blow up Instagram any minute now, or some kind of low-cost CBD methodology that is going to change the game as soon as they get it dialed in.

There’s great blogsport in clowning on those companies and the media that shills for them, so stay tuned, because that’s where we live, but for now lets’ do some simple, math-based separation. 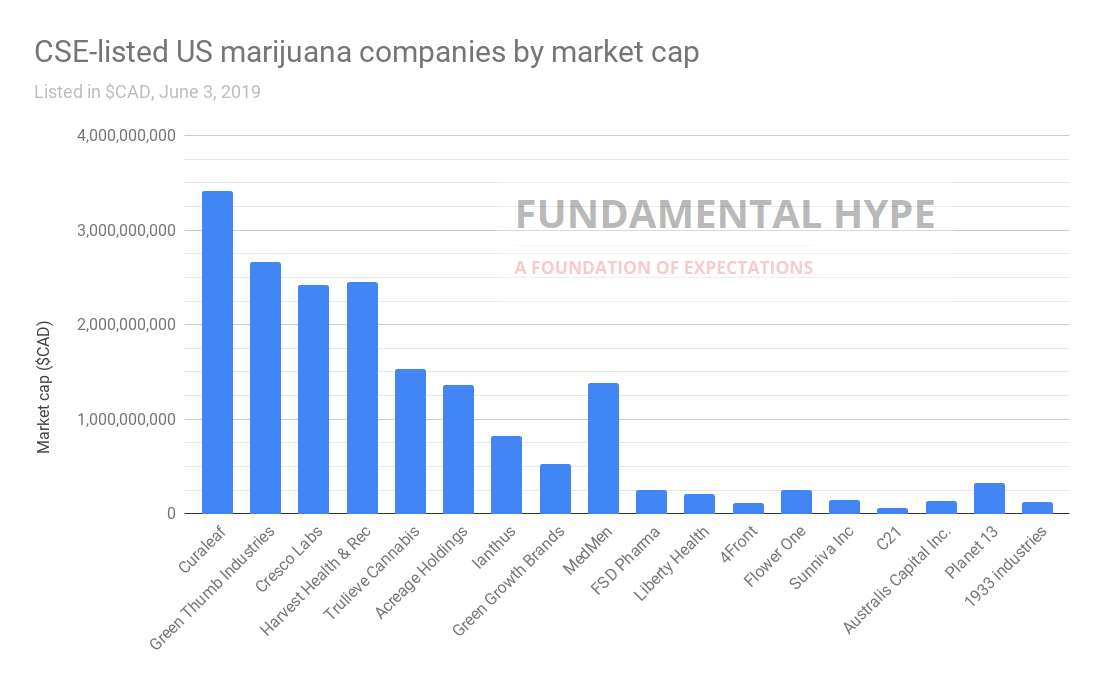 The quick-and-dirty way to achieve this separation is by market cap. These are all high-risk assets, and there might be a tiny company with the inside license track in a state that’s about to start issuing them, but that isn’t worth hunting for. If we’re after the largest growth potential in a multi-hundred-billion-dollar per year market, soon to be created by fiat, we’re better off with the best of the largest pieces. With a fine selection of companies already doing $10M – $100M / year in business, we can safely leave the punchy juniors for the shills and suckers.

We’re going to set a $1B market cap cutoff, and let Ianthus (CSE:IAN) sneak in there under the wire. MedMen (CSE:MMEN) disqualified for not having any cultivation assets, making it just a bit too different to compare straight across.

Businesses who trade publicly are required to publish their results in a standardized format, and it’s that way for a reason. Financial statements are the operating results of an operating business. It’s the technical readout by which we’re able to determine what is going on in the machine. These documents aren’t as widely followed as the pop-trading media that exists to re-write pitch decks, because they don’t post as often, and they’re a lot more difficult to read. That’s the nature of the straight goods: they’re harder to handle.

All of these companies have to put their best foot forward, show some investor-marketing chops, get some story distribution and make sure they’re understood. The filings are where we figure out whether or not the strategy being laid out in that torrent of optimism is working.

The statements are going to tell us how much got sold, how much it brought in, what it cost, what got spent developing the business, what everyone at the trough cut themselves in stock-based compensation, where all the money came from, and how long it figures to last. Everything gets itemized and categorized to give us the type of granularity we can use to get a feel for it all… or it doesn’t. Conspicuously. For those who understand what they’re looking at, it’s the BEST reading.

Collectively, the quarterlies give us a chance to make comparisons. Sure. They’re operating in difficult markets and have different (strategies! upside potential! CATALYSTS!)… but all that has to either make money or not make money, and show how it’s going every three months along the way.

The top line is the main line

Understanding the rest of the field is a fairly straightforward arithmetic exercise. Since these companies are growth-phase businesses in the process of scaling, the first thing to look at is the top-line revenue. Low margins aren’t worth scaling and scaling negative margins is literally burning money. 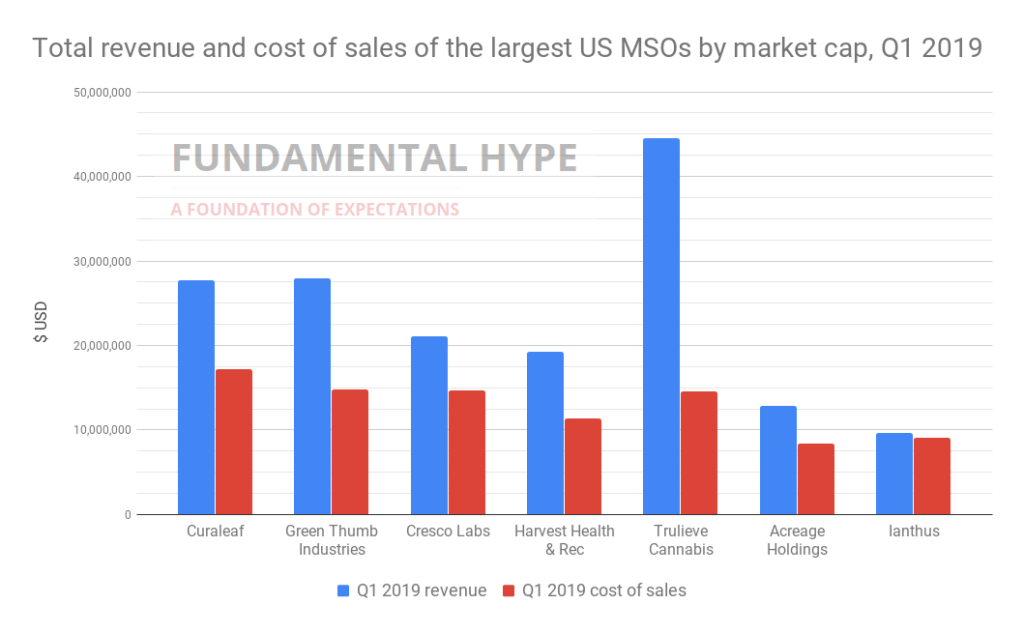 Three things jump right off of this chart 1) Trulieve (CSE:TRUL)‘s out-sized revenue compared to its peers, 2) Trulieve’s out-sized margin compared to its peers, and 3) Ianthus’ last in class revenue matching its last-in-class margin. One of these businesses has their operation dialed in to suit its environment, five of them are figuring it out nicely, trimming the lines, and at least one of them has a really long way to go.

Letting IAN jump past the you-must-be-$1B-tall-to-ride sign might have been a premature move. IAN’s revenue for the portion of 2018 in which they operated was $3.4M, so the jump to $9.6M the next quarter looks impressive at first blush.

But that jump can be attributed to their January closing of an acquisition of MPX Bioceuticals, losing the Arizona-Massachusetts-Maryland MSO’s responsibility to audit their 2018 financials in the process. Between the MPX acquisition, shares printed for debt maintenance, stock options, and warrant exercises, the IAN share count tripled last quarter, putting IAN’s sales about flat from quarter to quarter on a per-share basis.

Ianthus generates a lot of twitter chatter, and appears well-invested in capturing eyeball share. They’re listed clients of pump and dump facilitator and self-appointed Equity Guru Chris Parry, and that tells us all we need to know about their priorities. We don’t see any reason to take IAN seriously going forward.

Trulieve, on the other hand, looks like it’s out-classing everyone else on the page, because it is. We’ve got a more detailed look at why anchoring an up coming post, but this absolute CRUSH on the top-line is enough to demonstrate that TRUL knows something about this business that their peers don’t. TRUL is also the only cannabis pubco anywhere posting a BOTTOM line profit consistently. The market’s hivemind is having trouble confronting that, because it could shatter some important paradigms that bind its very fabric.

Regular readers know that Fundamental Hype places considerable weight on the output of cultivation assets, and that we measure that output in terms of grams sold, the best measure of how much sellable weed a company can grow in any given period being the number of grams it sells in that period. These companies haven’t started reporting their unit sales yet, but most of them include an average selling price per gram in the required valuation of their biological assets. For most companies, we can use that figure and their revenue to reverse engineer a rudimentary, noisy-but-useful company-wide unit sales figure. 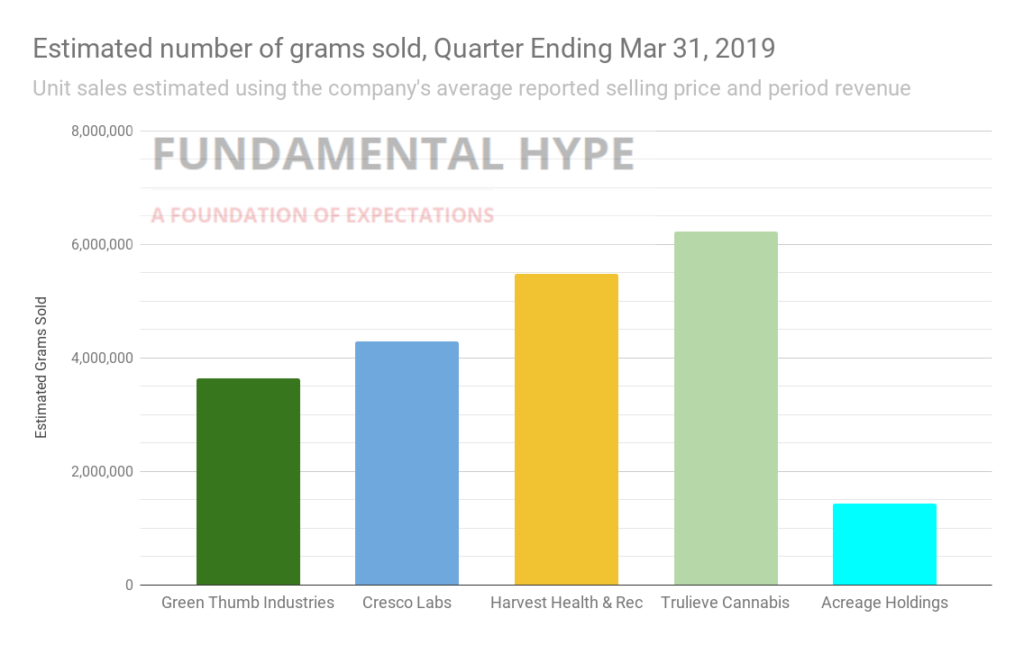 Among the companies large enough to merit consideration, there are distinctions to made based on reporting, and reporting styles.

Some of these reports come off as earnest attempts to explain the business’ various moving parts. Their tone is one of a person who is thrilled that someone actually wants to hear about their baseball card collection, and those are the most useful documents. The other tone is one of begrudging, required disclosure, and it’s the one that we pick up very distinctly from the Acreage filings. They shove the necessary data in the reader’s face like they’re giving a White House press briefing; it’s almost hostile.

Acreage and Curaleaf both have a number of subsidiaries in states where they presently aren’t allowed to own the cultivating and dispensing assets that they operate under management contracts. That leading edge risk may well give Curaleaf and Acreage a first-mover advantage in those areas, but it also builds a significant opacity over a significant portion of their operations and makes it hard to compare them to their peers.

Accordingly, it’s hard to know what to make of that Acreage number. They publish an average realized price per gram on the high-end, and it’s unclear how much of their $12 million in Q1 revenue came from cannabis sales. Curaleaf brings a much tighter presentation that splits off their management fee revenue, and that would make their unit sales easy to figure had they provided a per-unit selling price of any kind, but they didn’t. It’s worth noting that CURA has ACRG beat on revenue by more than 2:1. Unlike Curaleaf, Acreage doesn’t split the management number off, so there isn’t any way of even telling if this over- or under-sells these managed operating segments in terms of their actual production. If ACRG reports the same way next quarter, we won’t include them.

When we divide these companies’ quarterly unit sales estimates by their enterprise values, Trulieve comes out looking like an absolute bargain, trading around $250 worth of EV per gram, almost half of next-best-value HARV. The company’s “attractive valuation” got some help the other day from a simply worded press release announcing TRUL’s purchase of a Florida land parcel upon which it intends to build a new cultivation facility. The market hated it, pounding TRUL for a 13.7% loss over the next three sessions. The company is also one step removed from – though not yet named as a target in – an FBI public corruption investigation involving City of Tallahassee public officials. A much closer look at TRUL is in order, and we’re going to have it for you this week on Fundamental Hype.

Fundamental Hype doesn’t usually take requests, but KPRC2 Houston’s own Vincent Crivelli asked for the revenue-per-share angle on the field, not just IAN, and that’s a pretty great look, so here we go: 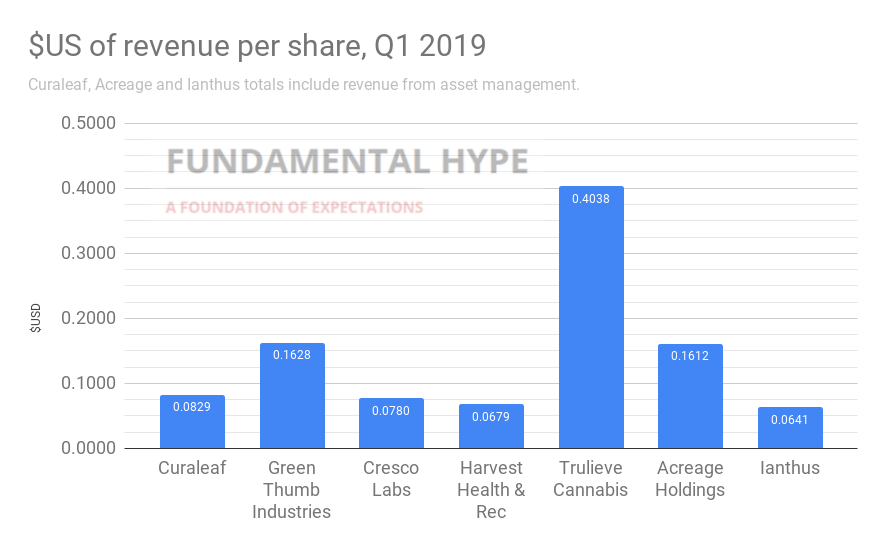 The big standout from this cut is Green Thumb, who distinguished themselves from HARV, CL and CURA. The total revenue look (repeated again below) had them practically neck and neck.

Trulieve still way ahead of the pack. Remember: CURA, IAN and ACRG.U are partly managed revenue. For the purpose of using this for projections, it’s worth remembering that we don’t know how that tracks with cannabis sales. 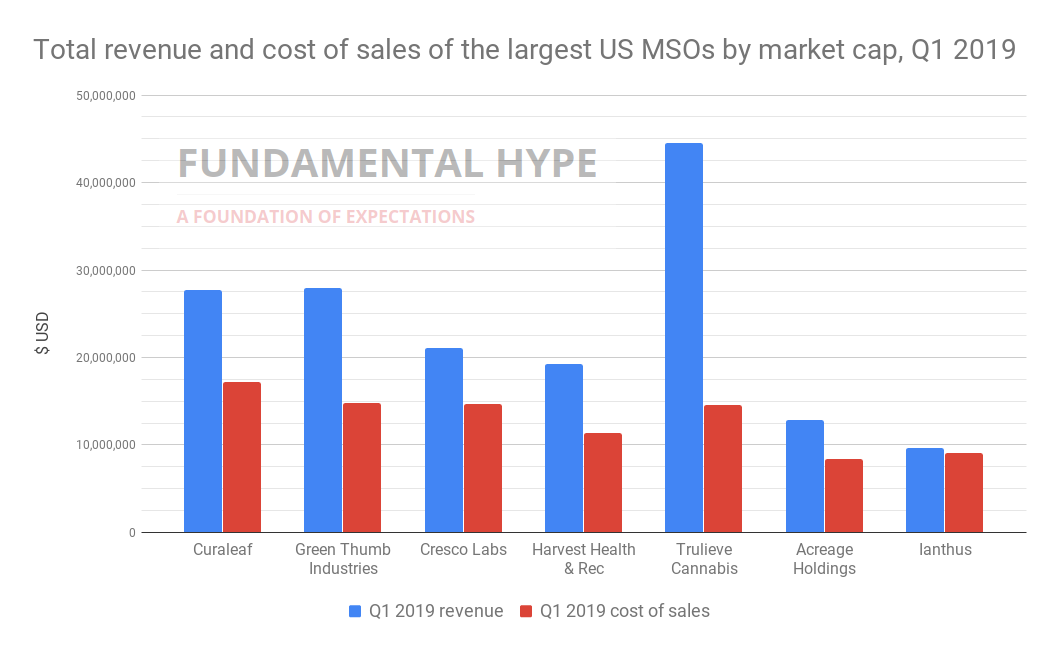 Thanks for reading, Vincent!