Is this the turn?

Caonpy Growth Corp (TSX:WEED)(NYSE:CGC)‘s year-end financials showed up on the tail end of a full court press of earned media that the company is so adept at cultivating.

For the most part, the financial press swallowed the full-year treatment that ignored a quarterly slump in unit sales, pushed the bump in revenue and played down quarterly and full-year losses. It wasn’t for lack of effort, but the spin didn’t make the pitch break. CGC was -7% Friday following the company’s press-release treatment. The official quarterlies were posted after Friday, ruining analysts and journalists’ weekends. The stock moved 4 million shares today to close essentially flat at $53.53, (+0.25%).

“What’s good for General Motors is good for America.”

There was a time when Canopy wasn’t just a bellwether cannabis stock, but THE bellwether cannabis stock. If they had missed like this last quarter, the hivemind may well have considered it bad news for everybody. But the subtleties of this business are becoming a lot clearer. Their peers are producing better growth in unit sales, and showing more efficient use of capital. The sell side support they once counted on might not be backing away, but it isn’t exactly rallying either. Canopy got the big number from Constellation Brands (NYSE:STZ), so they won’t be doing any raises any time soon, and the sharps in indy research look like they’re turning on them… why hang around? The smaller companies don’t need Canopy to show the street that cannabis cultivation can work at scale. They’re busy showing it themselves.

But you can’t dance with the champ, you’ve got to knock him down.

As capital markets operators, Canopy Growth Corp are among the best, and the largest pot company in the world by market cap didn’t get that way by accident. As long as the markets remain ambivalent to the fundamentals of the business that backs the equity, they figure to continue that success. As the late Richard Russell used to remind us,

“The market can stay irrational longer than you can stay solvent.”

Let’s get to the numbers.

When Canopy released their Q4’18 earnings, we were disappointed to learn that the inventory by weight had disappeared all together. This mid-year extinguishing of two metrics (kg of dried cannabis and liters of oil) followed an April 2018 consolidation of dry and extract grade cannabis. It didn’t come back this quarter, rendering one of our best charts totally useless. 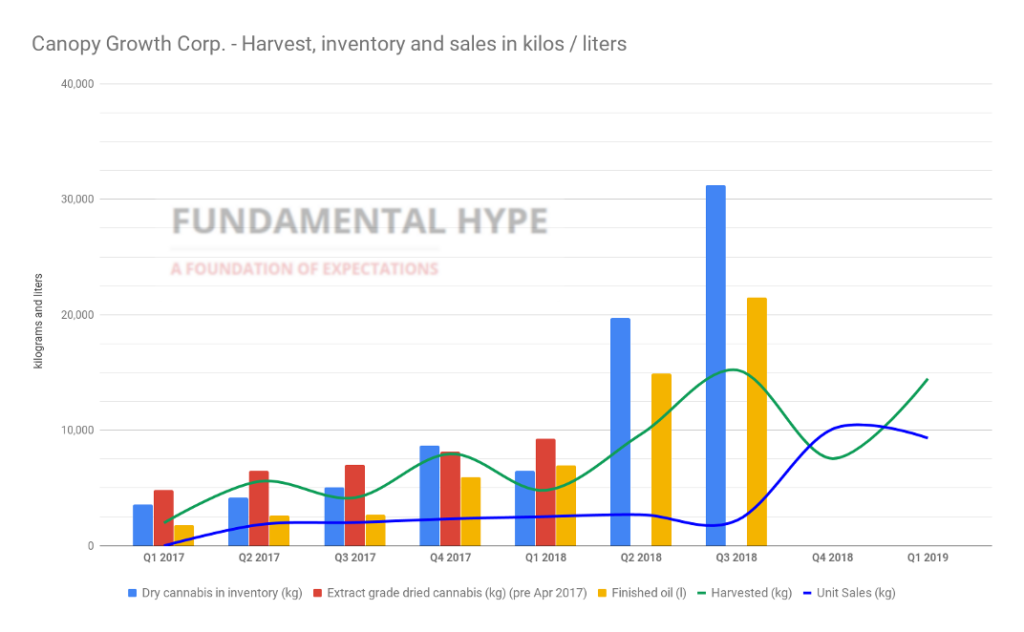 We expressed at the time that this made us weary about Canopy’s inventory, as did others in the financial press, and we soon saw similar concerns from institutional analysts. GMP’s Martin Landry downgraded Canopy in February (thanks for reading, GMP!), and BMO’s recent forecast of an inventory write down in Q1 came to pass. Canopy wrote down $1.3 million worth of inventory in the quarter to round their full year inventory write down total off at $21.6 million. Taken together with a slump in sales, it doesn’t make Canopy’s output seem high in quality.

The oil/dry/cap split was taken away last quarter, so all we really know is that 9.3 million kilos were sold, and 14 million kgs were “harvested,” which sort of loses meaning in a company consistently writing material off. Robbed of units of mass, we’re forced to count this inventory in dollars. 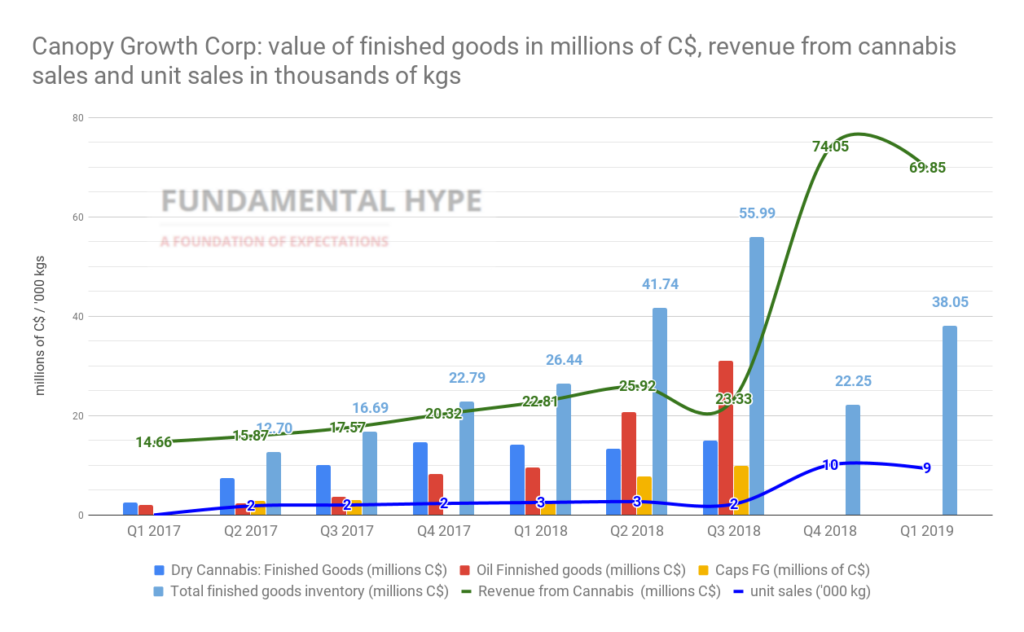 The dollar-based look at Canopy’s inventory is best served with the company’s cannabis revenue, mostly just to give it context with like units. We left the unit sales on in kg, because that’s what matters when evaluating cultivation. This is their total recreational & medical sales, without “other revenue” from non-cannabis producing divisions. The other thing that matters is margin, and

Their margin is questionable.

No, seriously: we have lots of questions.

Canopy eats the cost of operating facilities that aren’t presently producing in their cost of sales. Nobody else does that and, as @GoBlueCDN pointed out in his very thorough CGC earnings overview (Cannalysts subscribers can read it here), they ought to be given credit for that. Other cannabis companies find a way to put the cost of their empty space anywhere but the top line. Canopy helpfully break the cost of the vacant facilities out, and that SHOULD give us an opportunity to calculate a margin for the properties that are operating… but we’re only interested in the margin that they’re achieving from cannabis revenue, and there’s no way to get there because of

Last quarter’s statements broke out the cost-of-sales attributed to non-cannabis producing facilities, giving us a way to arrive at Canopy’s margin on their core product (30.23% in Q4’18). This quarter we weren’t so lucky. They broke out the impact of those non-operating facilities in the cost of sales, but without the non-cannabis costs to back out, we’re left with the same problem we started with. There’s no way to calculate the margin that Canopy is getting on their cannabis.

This condition of not operating at several facilities has been carrying on longer than anyone would like. In 2019, they gave us more detail on what wasn’t operating.

They forecast last quarter that margins would improve “in the coming quarters,” as those fallow spaces become active, and forecast a further improvement in margin “when edibles and beverages are introduced later in calendar 2019, with lower cost of active ingredients per serving.” So it’s about time we got around to that.

The quickening edibles and beverages drumbeat from Canopy Growth is becoming a concern. In the context of a cultivation unit that is faltering, fighting fires instead of showing steady improvement, it feels more and more like wishful thinking. As we wrote in our last MJ Datajam, flower is 50-60% of sales in the mature markets for which we have data. The other 40-50% is a mix of all things un-flower. The largest portion of that portion is concentrates and not all concentrates are created equally.

Concentrates are effectively a kind of hash or hash oil. The days of hot-knives being long behind us, these products are now “dabbed” through various types of newfangled smoking or vaping devices made by now-canopy-subsidiary Storz and Bickel, and sold by not-yet-amazon-of-cannabis Namaste (TSX.V:N), and pretty much any local head shop. Depending on composition and consistency, it’s often called “shatter,” “wax,” or “butter.” The processing phase that creates these products removes the plant matter from high-end flower, leaving a concentrate of cannabinoids, complete with that kind-bud flavor. If the trouble Canopy is having producing flower persists, it figures to carry over into concentrates.

The smokeable flower that makes good shatter and butter is the kind of whole bud that sells out right away. It gets people calling you back, asking if you’ve got any more of that good stuff. Extract grade flower is the kind that just won’t move. It ends up stinking up your car for a week until you finally just give it to someone to make brownies with.

Extract grade cannabis is medicine that has to go down with a spoonfull of sugar, and is suitable for Canopy’s apparent ambition to become a consumer-goods company that puts weed in everything. The lone member of the concentrates category that doesn’t start out as good bud is the flavored vape pens that deliver low-dose watermelon-flavored clouds to kids who haven’t taken their eyes off of their phones since 2015. BDS Analytics reports a localized trend toward this type of product in California, but most markets have shatter and wax as number one.

Max Zavet of Robes Cannabis calls this type of product “hot dog water,” because it’s more of a dilute than a concentrate. That’s an apt description, since Health Canada rules prohibit them from containing sugars, colors or sweeteners. They also can’t be appealing to youth or contain (get this:) “elements that would associate the product with alcoholic beverages, tobacco products, or vaping products.” (emphasis added). Sounds like a hard sell.

I need a drink.

A $4 billion cash balance means Canopy stays a relevant contender even if they light their cultivation assets on fire, and the money having come from Constellation Brands means that they’re WAY into beverages.

Lots of enthusiasm in there. Jumps right off the page under the “product innovation” heading. Despite an in-development bottling and canning facility in Smith Falls, this isn’t something that seems ready to go in the near term, and it’s easy to lose track of the fact that consumer adoption of cannabis beverages ins’t yet a foregone conclusion.

The angle about no sugar / no hangover is notable. We ran an item last week about a PR push by private company Trait Biosciences, who are developing a method of making cannabinoids water soluble and shelf-stable by attaching them to glucose molecules. Presumably, Canopy is planing on using the nano-technology-based method that Trait went to some expense to have a UBC professor warn us about in the daily paper. Or they’ve got another method. Or they don’t.

It’s worth asking whether or not Canopy Growth Corp. had what it took to be a scalable, operating cultivator in the first place. The market leader in this pot boom continues to make its way in the world as an un-relenting, sophisticated media dynamo pushing an enormous, swirling typhoon of money. And why wouldn’t they? It’s served them well so far. The jokes being cracked on social media about $282 million worth of stock-based compensation of one form or another coming off of their bottom line surely rattled management all the way to the bank. That part of the $685M bottom line loss might be the easiest one to explain. Stock-based compensation expenses go up with the price of the stock. It’s the product of a strong equity. 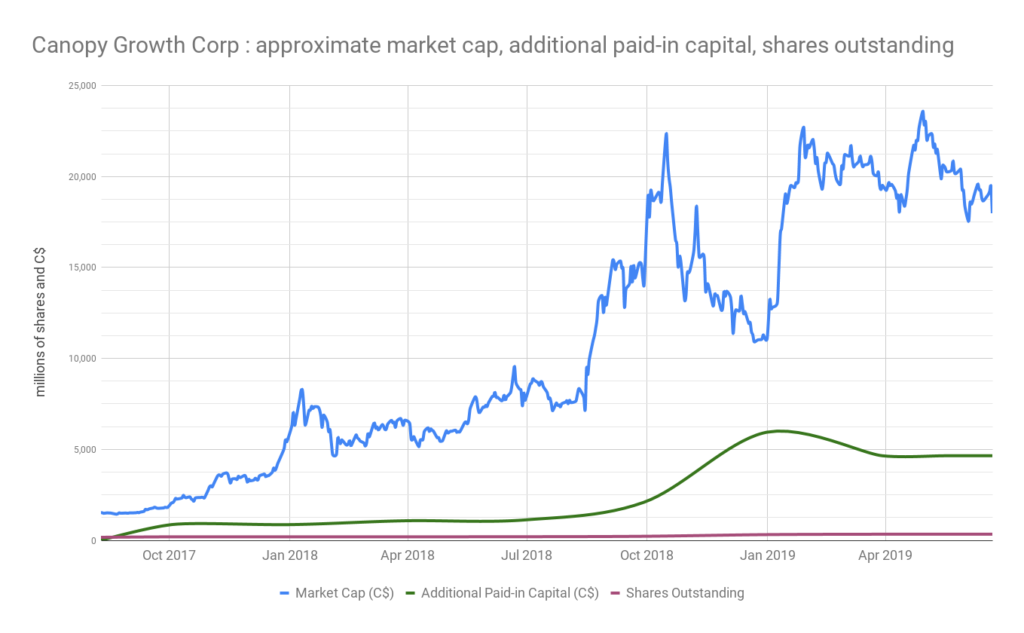 This is the biggest marijuana company in the world, even with declining production. In this developing sector, there’s no way to know what the right thing to do is. Hundreds of millions worth of goodwill hanging around in questionable ventures – both international and domestic – is easy to shrug off in cannabis. Nobody doubts that anything could work, and the goalposts are always moving. 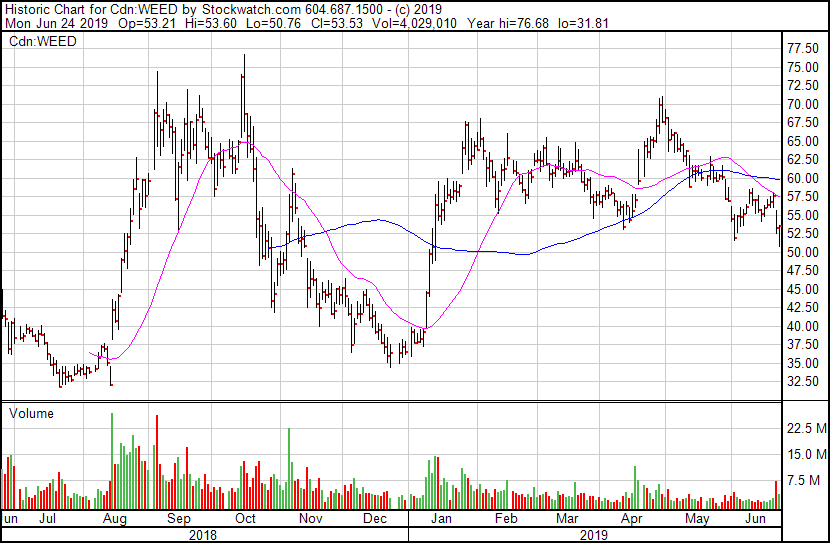 CGC suffered a steep drop below their moving averages after Thursday’s earnings release. Today’s recovery came late in the day, and failed to impress. This chart looks beat up.

It’s looked that way before, and sent shudders through the market each time it did. Back then, the champ being on the ropes was bad news for everybody. They turned it around in October with the implied legitimacy of the Constellation investment, and again in April with the implied (future) US exposure from the Acreage (CSE:ACRG.U) option. There’s no telling what, if anything, Canopy will do to start a rally this time, but a change in landscape has made the stakes lower for the sector.

Previously untouchable, this sales total only beat Aurora Cannabis (NYSE:ACB)(TSX:ACB)‘s same-period total by 146 kg. The next biggest company by market-cap, Tilray Inc. (NASDAQ:TLRY) is sucking wind at 3,000 kg. Organigram (TSX.V:OGI)(NASDAQ:OGI) punched way above its weight, shipping nearly 5,000 kg. That’s half of what Canopy shipped, from a company weighing in at 8% of Canopy’s size in terms of enterprise value. There’s a good case here that the sector is due to re-balance, and even odds it’ll lose collective value in the process.