If there’s any single company emblematic of this runaway pot sector, it has to be Aurora Cannabis (TSX:ACB)(NYSE:ACB). The cannabis giant reported their earnings this past Monday, shrugging off a ($238 million) net loss and getting very excited about the new frontiers that they’re opening up in overseas sales to medical clients. The earnings call was equal parts proud and optimistic. Production was up, revenue was up, and this $9.4B company that just sold 7,000 kg of weed to create $54 million in revenue, told the analysts and the world that, by this time next year, they were going to produce enough product to reasonably achieve about five times those sales.

It was a strong, confident message, delivered a week after they floated a $250 million convertible debt offering to finance it all.

How do you catch a cloud and pin it down?

Through wild and turbulent regulatory and capital market conditions, Aurora has always managed to read the landscape and make the move that bumps their market cap. Their moves are always aggressive, and not always popular. They get second guessed by observers, investors, and snarky know-it-all bloggers, but, so far, a hyper aggressive style hasn’t ended up hurting them.

Aurora’s approach to carving out a space in the cannabis boom has been and continues to be defined by the aggressive acquisition and management of enormous piles of money. Between the money they’ve raised in the capital markets and the share payments they’ve made in the process of making acquisitions, the ACB cap table has taken on more than four and a half billion of value over the past two years.

While much of the sector was trying to figure out the best way to use and preserve capital as they fiddled with systems and navigated the licensing procedure, Aurora was rampaging through the capital markets like a Mongolian hoard. Early cannabis investors desperately wanted to be part of enormous, scaled up industrial weed factories – the low cost, high margin plants full of plants (and they still do). Aurora gave it to them on paper, and became legends in their own minds (and the minds of their shareholders). As soon as Aurora floated the idea of their million square foot “Aurora Sky” facility, Canopy’s retrofitted chocolate factory was old news; a rushed retread-job. Aurora was the future. They became one of the largest pot companies in the world overnight. The weed trade was ON, and ACB was out to an early lead.

“If you don’t know jewelry, know the jeweler.”

What Terry Booths company understood early is that a cannabis company doesn’t actually have to grow any dope. Not really. Not right away, anyhow. Not if they can create enough money and equity to buy the companies who do.

Cannimed and MedreLeaf, the two companies who spent the first years of the pot boom carefully using their shareholders’ money to refine a process and create high-test medical dope from respectable facilities of a manageable size – resisting financing to keep their floats tight – are both wholly owned subsidiaries of the relentless Aurora Cannabis company.

The mostly-stock acquisitions (Cannimed shareholders held out for some cash) got done behind ACB being able offer stock that was the product of an exceptional sales multiple. Aurora traded at more than 200 times sales in a market all too ready to apply only the slimmest of discounts to forward sales projections. As far as the street was concerned, this company was building the capacity to grow 150,000 kilos of weed a YEAR! That’s more than a billion a year in revenue! What’s not to like?

How do you keep a wave upon the sand?

As the green rush took off, cannabis-oriented cannabis stocks cropped up like mushrooms. All sorts of fantastic and not-so-fantastic stories were bottled and sold to the smallcap junkies who had forgotten all about mining and were starting to have had enough of crypto. Cultivation licenses, pre-cultivation licenses, retail chains, all sorts of ancillary businesses and automation gizmos… The trade was on in this emerging sector, and Aurora put themselves right in the mix. Aurora took positions in all of the high-volume story stocks; kept themselves front of mind among both retail and institutional traders. Any time a stock started to trade volume and become a brand name, ACB was right in there, securing a position for themselves in the great retail cannabis future.

We used Harvest Moon Cannabis’ more in depth report on Aurora’s portfolio to write a summary of the pile of paper that Aurora has now marked to market and accounts for ($190M) of the ($238M) loss they took this quarter on Monday. The post was met with an aggressive “so what?!” from retail shareholder types, who are used to letting losses run like that, and still believe in the long term prospects of companies like The Green Organic Dutchman (TSX:TGOD) and Namaste Technologies (TSX.V:N). They just need a while to get moving. What they want to know out of Aurora is: what have they done for them lately!?

@CamBattley can you explain to your investors how you have their interests in mind? Lots of longs have stuck through dilution while other competitors have seen major growth for their shareholders. As an investor I want to know when I can expect reward for my investment $acb

That tweet, directed at Aurora COO Cam Battley, is the sort of thing IR desks get all the time. It isn’t even a question, really. More of a demand that the company explain itself.

The tweet was sent less than 24 hours after Aurora had finished an hour-long quarterly earnings call, complete with a top-to-bottom look at the business. Strategy and outlook for all sectors, the whole 9. Pretty easy to thank the guy for his question and link him to the call replay, right?  Maybe suggest he call IR if he still has questions after listening to it?

Dwall, that’s a longer conversation – not a quick tweet – and I’m happy to speak to it. Can’t right now, because we just finished a very engaging analyst day at Sky, and am headed to a dinner with colleagues. DM me on Thursday to remind me to re-engage?

Aurora is under no illusion about who brought them into this world, or the very real fact that those same people can take them out of it. Lose the attention and good graces of the capital markets, it’s game over. Fifty million a quarter in revenue won’t cover the scale ups and international expansion that they’ve got planned, speaking of which… did we mention the $250M debt offering?

Aurora was down to $165 million in cash in December, $41 million of it restricted by the terms of their credit facility with BMO, which require them to keep 2 years worth of principal and interest payments on hand, ostensibly to keep them from taking it to the pot stock casino.

Convertible debentures are an on-brand move for Aurora. It’s a big fat loan that they can pay back with a pile of paper that isn’t even going to amount to much relative to what they’ve already printed if the market co-operates, and they’re feeling LUCKY! 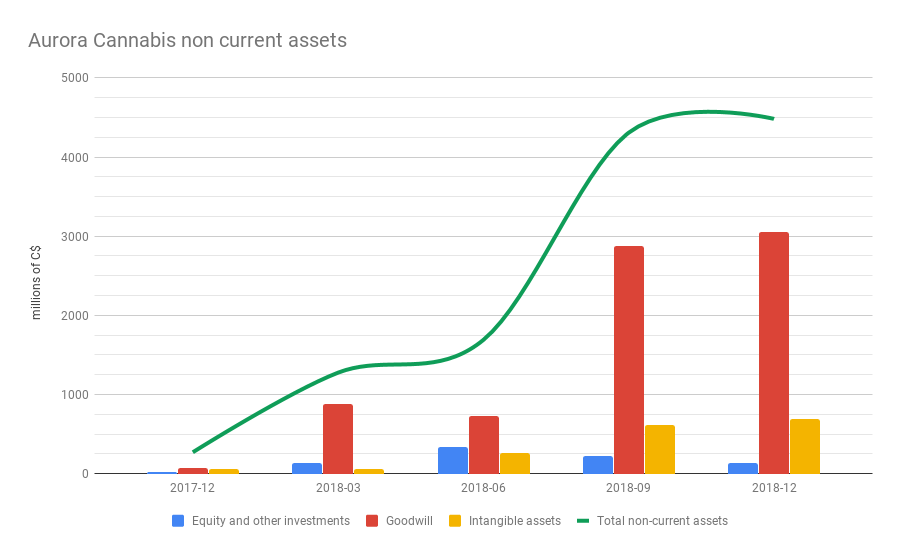 How do you hold a moonbeam in your hand?

Next to the goodwill they took on buying Medreleaf and Cannimed with stock, the equity portfolio looks pretty tiny. Of course, it IS marked to market, so if the market starts frothing at the mouth for Canadian potcos again, the positions could start to look pretty good, multiplying the effect a strong pot equity market would have for Aurora, and allowing them to issue shares for those $250 million worth of convertibles, and just carry on being Aurora, telling us about the next big thing and riding the wave.

Coming UP: ACB Outsourcing and inventory – Fundamental Hype tries to nail down what Aurora has in its vault.