Seattle based Canadian Cannabis producer Tilray (NASDAQ:TLRY) inc is a great example of the fundamentals creating their own hype. The company has established itself as a sector bellwether within months of a public offering and, in the process, earned a $10 billion valuation without really having to try too hard.

As a security, it’s one of a kind

TLRY’s inflated market cap has been achieved through some version of it being the only game in town. In the US investment arena, TLRY is the only company that looks like, acts like, feels like an American security. They don’t have a Canadian listing and aren’t prone to the type of penny stock style grandstanding that is in the DNA of their peers.

Take last week’s earnings release. It tracked like any and every US listed big cap company; financial highlights, business highlights, details about the call, then the P&L and balance sheet under the footer. They’ve got more substance in that business highlights paragraph than most companies could dream of, so they don’t dress it up; they just tell it. There aren’t any quotes about why their German expansion is important or the potential revenue of their 2:100 CBD export to the UK. It just all stands on its merits.

The IR page and the filings are done in a style familiar to the buy side and sell side analysts who deal with these things on behalf of the multi trillion dollar American investment universe. This posture isn’t a clever marketing choice by Tilray management, it’s the company doing things the way they always have. TLRY was already the most efficient producer in Canada when they went public back in July. They didn’t waste any time pandering to the retail public, because they didn’t need to. The private capital that backed them from go put up enough money to build a competitive marijuana producer, betting that such an entity would be worth more to the capital markets than it cost to build. And they’re right. 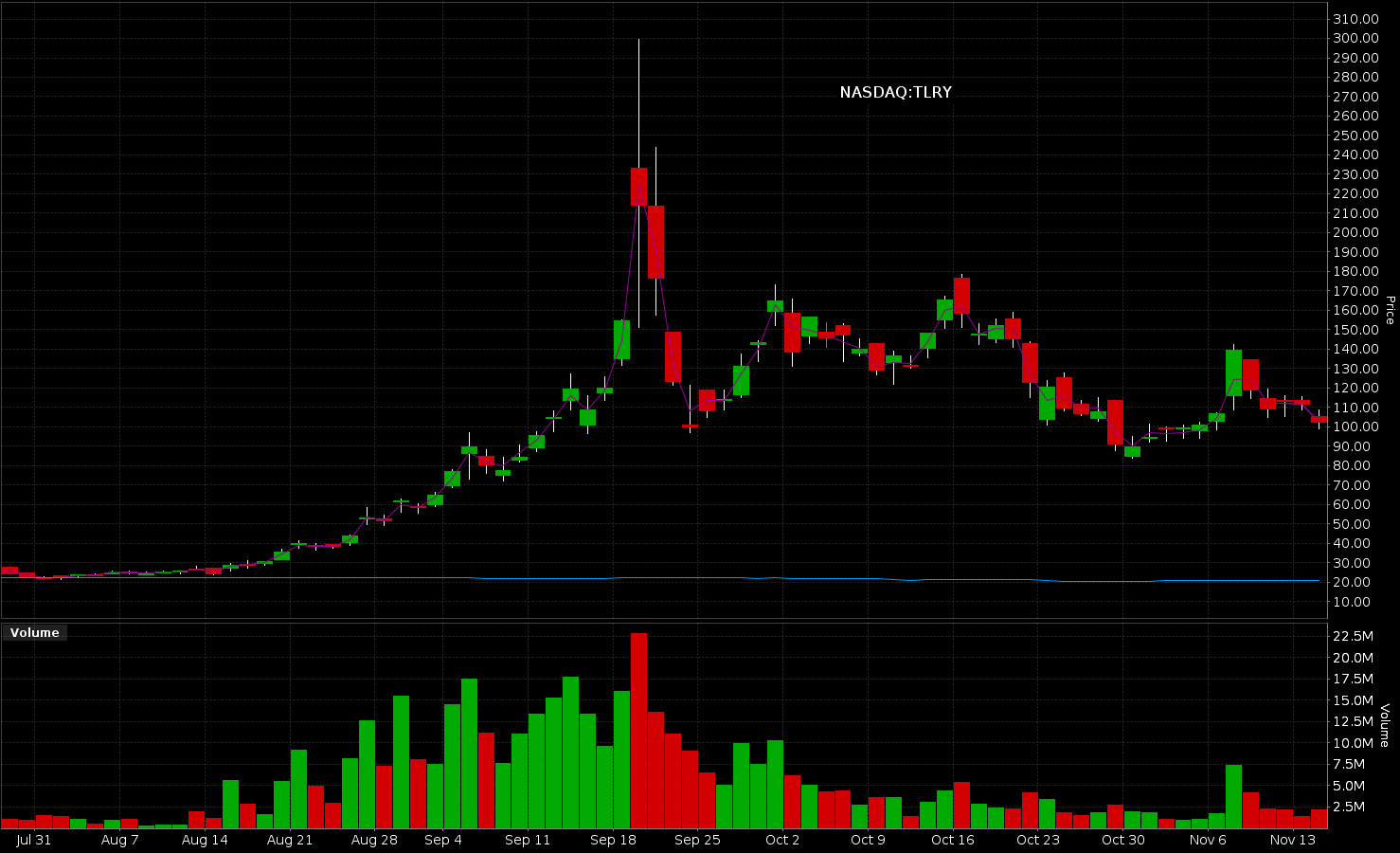 Seattle hedge fund Privateer Holdings used about $260 million in shareholder money to build the $9.5 billion Tilray of today. They did a capital re-shuffling this past quarter, taking a $37 million Privateer loan off of Tilray’s books. There’s no sense using the founder’s money with the whole sell-side lining up to move any security product they want to float. Tilray closed a deal for a convertible note paying 5% through Oct 2023. It converts to Class 2 common stock (1/10 the the vote of the Class 1 stock, owned by the founders & privateer) at $167.41/ share. TLRY closed at $109.50 today.

The reason they can raise $450 million at 5% on a company with a price to sales ratio somewhere around 250:1 is because they’ve given the US institutions sold on the growth potential in the marijuana space something palatable. It’s a purpose-built vehicle that doesn’t mess around. An efficient operator with a vision. The company scans like a unit – a direct contrast to the only other US listing in its weight class, Canopy Growth Corp. (NYSE:CGC), which is more of a patchwork quilt.

It isn’t clear exactly how much growing and processing space was in operation at Tilray Nanaimo in Q3. The quarterlies talk about new rooms coming on line in addition to the 60,000 square feet they had in July, but doesn’t say how many. The facility’s full, built-out footprint is 215,000 square feet and we expected they would have announced a full completion.

Tilray’s only operating facility produced all 1.6 million gram equivalents that they sold in the September quarter. Canopy produced from 693,000 square feet across multiple facilities in the quarter, and only beat them by half a million grams. 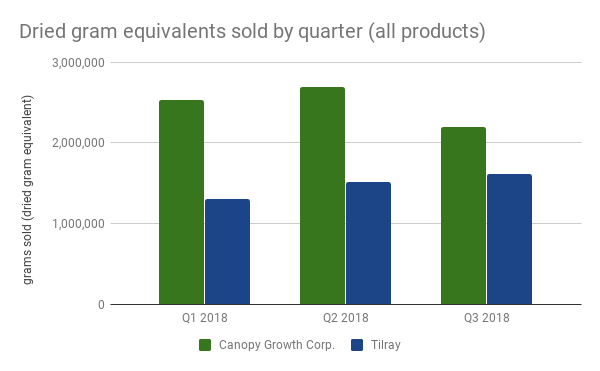 Even if we saddle Tilray with the whole 215,000 square feet when we calculate their Q3 operating efficiency, they still come out ahead.

Both companies will see large footprint expansions next quarter. Tilray’s High Park operation in Ontario received its full sales license from Health Canada just last month, meaning Tilray’s Q4 will include production from just over 900,000 square feet. Canopy’s first crops out of their BC Tweed facility will also fall in Q4, but they aren’t saying how much of the planned 3 million square feet is operational. Canopy also announced that they had full licensing for 1 million square feet at Tweed Farms (Niagra on the Lake) with 2 weeks left in the quarter, so we’ll expect a bump in production for next quarter’s numbers.

Growing pains are to be expected out of both new operations, and Canopy’s Tweed Niagra has about a month’s head start on Tilray’s High Park, and a distinct space advantage. Despite that, we expect Tilray’s gross unit sales to compete with Canopy’s in the first true rec quarter, and would bet that they continue to show better company-wide efficiency.

Because Tilray is deadly

From an ops standpoint, Canopy is a huge, lumbering whale. It’s bigger and stronger than anything else in the sea, and has more than enough power to keep itself moving at a good pace. Crosscurrents and riptides don’t really effect it. It barely feels them. The Canopy whale does what it wants, and nothing messes with it, because it’s huge.

Tilray is more of a shark. It’s smaller, but it’s got plenty of power and is far quicker and more agile. It gets more out of its movements and is far more aggressive. It picks its chances carefully, doesn’t waste any strokes, and generally doesn’t miss.

IR wise, you don’t catch Tilray on BNN talking about the great cannabis revolution and how they’re proud to be a part of it, or doing photo ops at the fist rec sale. Gaining market share in Canada is something they’re clearly interested in doing and one expects that to happen, but it distinctly feels like a necessary near-term goal. A farm-league team to build up for an assault on the Big League that’s going to opening up down south.

This is hardly a revelation. Everyone wants to be in a position to carve up that big US market when it opens up. Including Constellation Brands, who clearly didn’t pony up $5 billion for a controlling interest in Canopy for access to the 30 million people in the Canadian rec market. But anyone who wants that large a stake in Tilray is going to have to talk to Privateer Holdings about it, and one would infer that they’d rather try their luck in their home market before selling away control of the most efficient marijuana company in history.