This post is about a recent high-profile suicide, our modern internet culture, stigmas associated with mental health, and has nothing to do with the stock market. Fundamental Hype will return to our regularly scheduled charting of quarterly unit production and making fun of the Midas Letter with our next post.

The modern internet has bent reality.

The recent crowding of various video streaming platforms has shown our thirst for content to be virtually bottomless. A generation of people who grew up on video games are as entertained by watching people play them and talk about them as I am by watching baseball. While that isn’t really my thing, I get it. The game being played is familiar and tangible, and the person playing it and talking through it is relatable or entertaining or both. Universally, the ones who come out of nowhere to amass enormous followings are genuine. Corporate attempts to replicate Youtube and Twitch success are only ever successful when they’re backing the genuine article, because authenticity is what we’re after. By definition, it can’t be faked.

I had never known or watched the youtube and twitch personality named Etika before it was announced that he took his own life yesterday. The 29 year old amassed an enormous following playing and reacting to Nintendo games and various other videos and memes and internet flotsam and jetsam. Etika’s reactions were frequently over the top and explosive, but if that was all it took to get 800k followers, everyone would do it. The success here comes from the fact that – as big and explosive as they were – the reactions were always real. A viewer doesn’t doubt for a second that his heart is really beating up into his throat as he is awestruck and dumbfounded by the fact that they’re making a Super Smash Brothers game for the Switch.

There’s exploration to be done about the effect of social media on people with mental health disorders. The dopamine and serotonin yo-yos of gaining and losing followers doesn’t scan like a healthy thing, and neither does the way it tends to blur the real and the un-real. But mental health problems have been around longer than twitter, and they affect us all both individually and as a collective.

Sometimes, it all just gets too real

Fourteen years ago this past spring, I got the news that Pat Archibald, one of my very best friends from high school, had killed himself at 24 years old. It rattled me pretty hard and it still does. It rattled all of us. I still think about Pat every day. He was a phenomenal guitarist, and there’s really no way to over-state that. His older brother Scott was a great guitar player himself, and also a great older brother, and Pat looked up to him the way younger brothers do, so he got started playing really young. Typical of 8th and 9th graders, we’d listen to Black Sabbath and Led Zeppelin and Pink Floyd, and I’d always try to get him to play the solo from Heartbreaker or Bold as Love or something, and he’d always laugh me off. Not because he couldn’t, but because playing other peoples’ music bored him. Pat had great taste, and listened to objectively good modern metal like Tool and Kyuss, and you could hear that sort of sound in his playing, but only on the surface. At the root, Pat Archibald had what every guitarist would give up a pinky for: his own sound.

It was deep and textured and one of a kind. He would use all sorts of weird tunings that didn’t make any sense to anybody but him, and that nobody had any business using, and somehow just make it SCREAM. He loved pedals and knew how to use them right, playing into the distortion and modulations, always taking you somewhere different, never the same thing twice. He made everyone he played with better. We’d jam for hours at a time in Matt’s (very patient) parents’ basement. He’d break a string, adjust the tuning and just keep on going. Nobody who had ever watched him had ever seen anything like it. It’s rare that pure, free-form expression is so complete and enjoyable. A true original. I may have never known anyone more genuine. 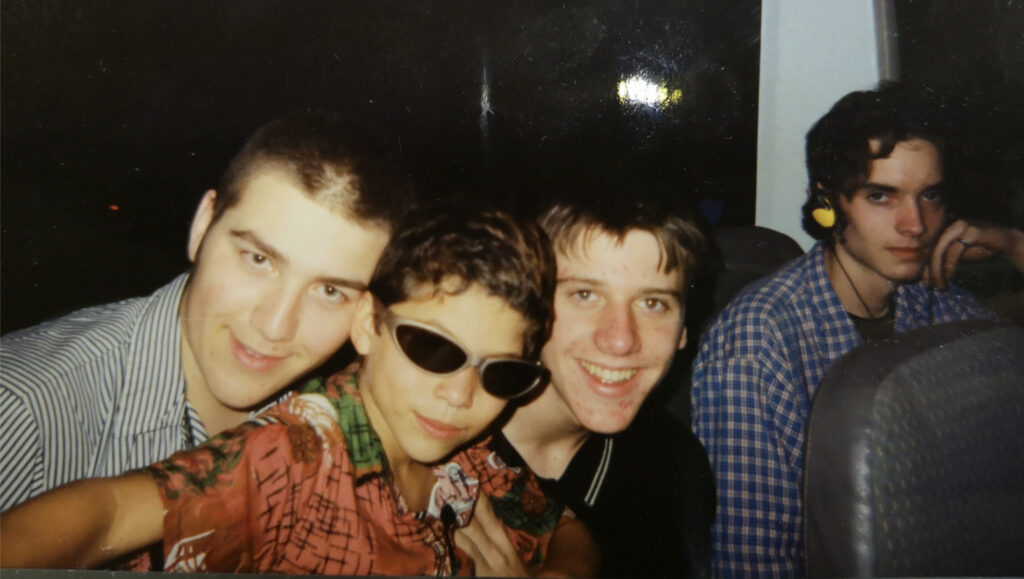 Pat could be a very dark person. Brooding. Outside of music, he could never really get comfortable. He hated hypocrisy, and didn’t quite know what to do about it. The little things that most of us just shrug off, like your sneakers being made in China by children in effective servitude, were things Pat would carry. Maybe he put them in his music, I don’t know.

Clinical depression is extreme and graphic. After a stay in an institution, Pat withdrew from friends and family and spiraled into some terrible self destruction. The end wasn’t pretty. Like I said: it rattled all of us.

Humans are social and we need interaction whether we want it or not. I often wonder if there was a way I could have been a better or more active friend to Pat. I didn’t know how bad it was at the time, and I doubt I’m the only one who wishes they did, wishes they’d reached out, or that he’d reached out to them.

Our modern understanding of mental health issues has led to a concerted effort to break the stigmas associated with them. People don’t seek the help they need when it means being labelled for the rest of their lives. This leads to a great deal of suffering by the afflicted and the people around them, and to the progression of conditions. In the worst cases, people with mental health disorders end up like Etika, or Pat.

If you don’t get it, it’s because you’re fake.

I try to keep my ongoing feud with self-described “Equity Guru” Chris Parry off of Fundamental Hype. Y’all are here to read about the markets and financial media, not some jerk who runs a tout site, and I don’t much like to think about it myself, so I’ll try and keep this brief.

Unable to answer pointed questions about shill jobs he’s on for his clients, Chris Parry often attacks the reputation of the questioner. One of his most frequent lines of attack is to make an unfounded assertion that the questioner is “a psycho,” “unstable,” “schizophrenic,” or otherwise mentally unwell, as if Dr. Parry is able to make the diagnosis via twitter, based on an angry reaction to his intentional goading. 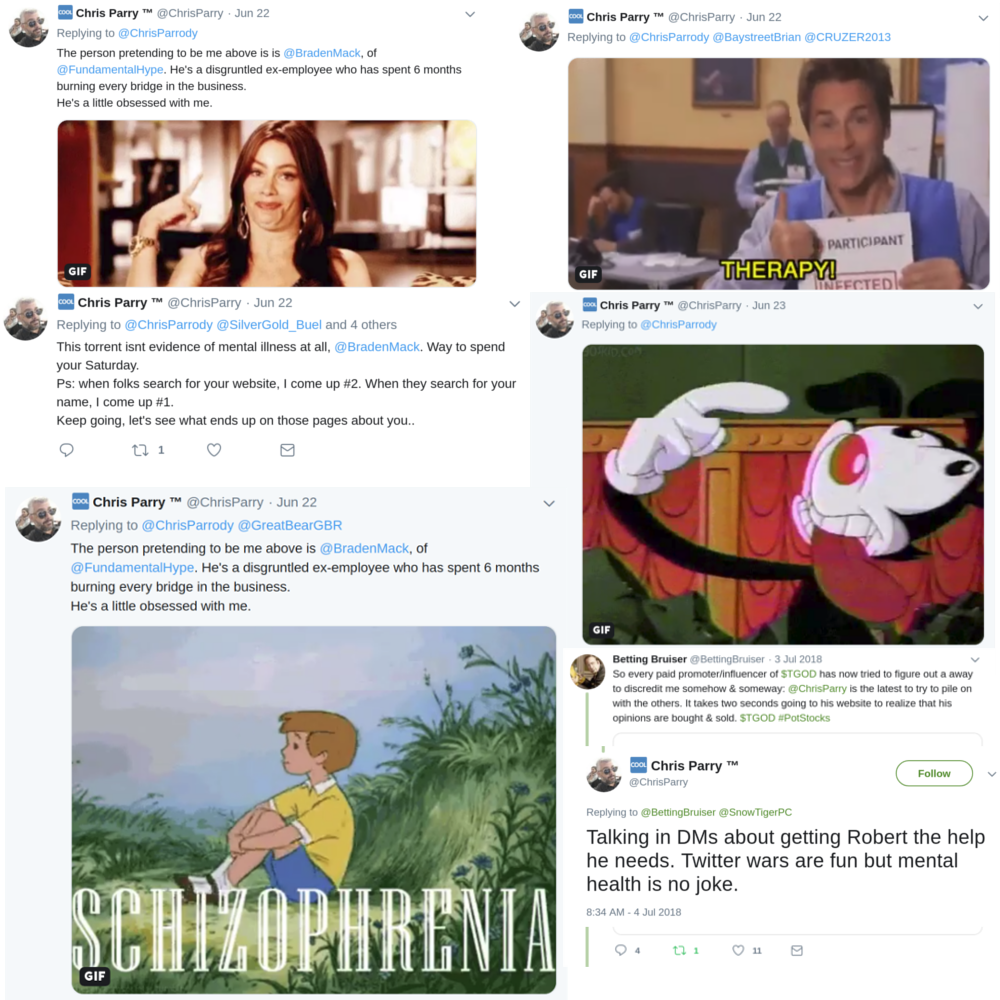 This type of thing doesn’t bother me personally, because I know it’s a lie. I’m as thankful for my stable mental health as I am glad that I’m no longer at Equity Guru. But I’m not the victim here. People with mental health issues are. To Chris, their disorders are convenient ways to run interference for himself and his partners. Every once in a while, he tries to sell it with fake concern like in the bottom right panel. It’s the only kind of concern he knows. The only kind of anything he knows.

For reasons that escape me, Chris Parry is read and presumably believed by enough people to make a difference, and that’s bad news for the people he’s using as a clumsy form of damage control.

If you suffer from mental health issues, don’t let it stew. In 2019, the only people still keen on making you an outcast for seeking help have selfish reasons. Often they’re trying to make themselves feel better or using it as a deflection mechanism to avoid having to look inward. Sometimes they’re running interference like Chris. Reasonable people have already made those people out for fools, and those same reasonable people will respect you for having the courage to get the help you need.

If you’re experiencing suicidal thoughts, talk to a friend of family member. If you can’t, then you can call 1-833-456-4566 to reach the Suicide Prevention service in Canada, or 866-488-7386 to reach the Trevor Project in the United States. There are plenty more resources and phone numbers here. You can also email me at braden@fundamentalhype.com. I’m always happy to hear from readers.