The Aurora Cannabis Company (TSX:ACB)(NYSE:ACB) has been muscling their way into a larger and larger potion of the Cannabis landscape for quite some time, and Fundamental Hype has been bringing its readers a critical look at their movements for just as long. We’ve updated our models following their Q1 earnings to bring you an annotated guide to five charts that put you at the core of the Aurora.

Anyone who’s in venture equities and doesn’t admire Aurora just isn’t about that lyfe. Growth companies are more fun than the broader index or yield generators because there’s more action. It takes work and sacrifice to build a contender. It takes a judicious exposure to risk, and watching how these players navigate the landscape is practically a spectator sport.

Selections from the cap table and balance sheet 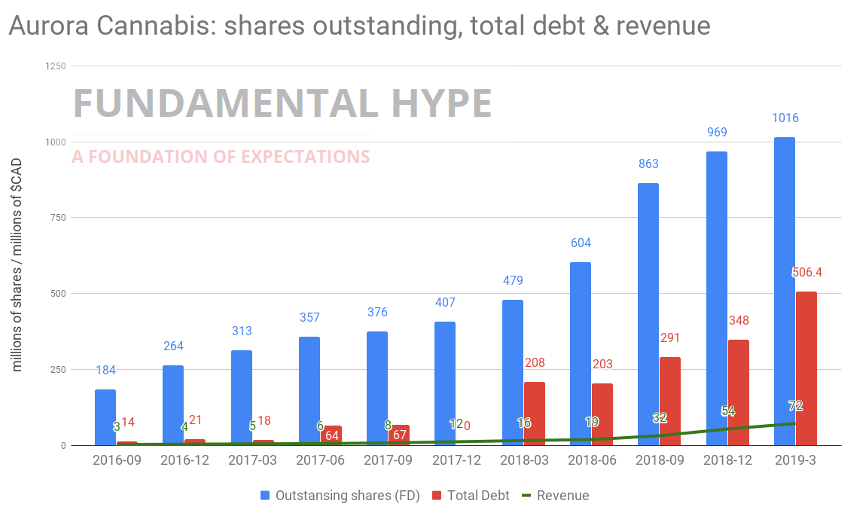 From this angle, Aurora looks like a printing press got a hold of a credit card. It draws grumbling about dilution and debt load from those without context or vision. Naturally, there’s a lot more to the story.

The first slide in any potco deck is always the global market for marijuana. It’s always a quote from some brand name consultant (Deloitte, Navigant, E&Y, etc.) putting it in the billions. It’s the reason we’re in the room and Aurora hasn’t lost touch with that. They treat their cap table and their balance sheet like securing part of that market is their birthright because, as deep as they are into the perverse reality of this capital market environment, it’s less risk to do so. 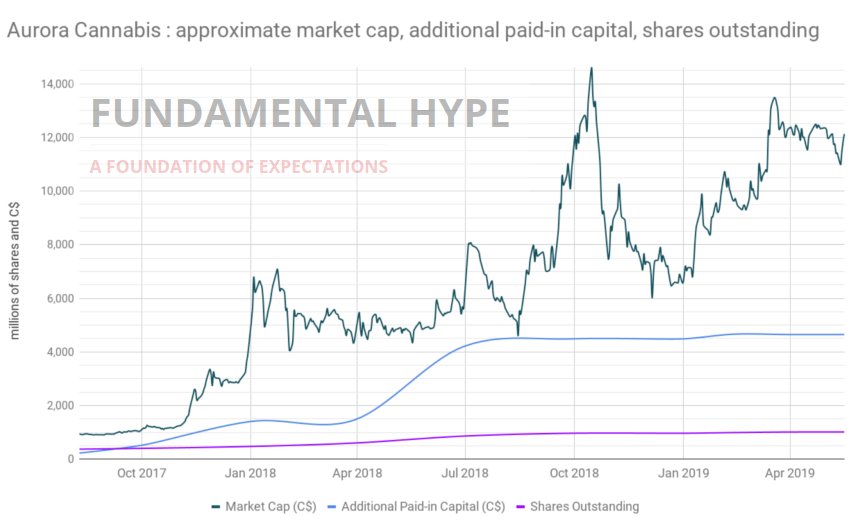 When we put Aurora’s shares outstanding up against their market cap, the changes barely track. Paid in capital is effectively the money or value the shareholders have contributed to this balance sheet over time. Objectively speaking, Aurora has been able to convince the market that that capital is worth contributing.

Building enormous, high tech cannabis farms and associated processing infrastructure and optimizing their operation is the only thing more expensive than buying them. Having them, and making sure everybody knows about them at full volume, is worth something to the equities markets, so Aurora keeps the throttle open.

The licenses carry the most value of any single line item in their intangibles and goodwill. It makes perfect sense to dedicate all of the operational effort they can afford to making the licenses pay off. The money that it costs to do that is going to have to come out of the equities markets if it’s going to come at all, so it’s “damn the torpedoes;” give the people what they want.

In March of 2018, with the stock trading at $11, ACB issued $230M in convertible debentures at 5%, with a  convert price of $13.05. The stock took a dive over the summer, went on enough of a tear to put the bonds in the money for a brief minute, and promptly fell to $7. In January, with very little conversion on those bonds, ACB was (and is) paying $11M or so in interest on those bonds annually, and were getting kind of low on cash. But before the convertible got them in a pinch or the low cash balance started to impede their build, Aurora just said: “fu*k it,” and issued another $460M in convertible bonds at 5.5% for a 5 year term. Those ones had a conversion price BELOW market, and Aurora can’t force conversion until 2022.

Paying the coupon on those converts is going to cost Aurora $36.8M/ year, which is a lot in the context of their revenue, but a rounding error in the context of their market cap. As far as the principal is concerned… well… whatever. That’ll either convert or it won’t. Gunslingers can’t afford to worry too much about being shot. 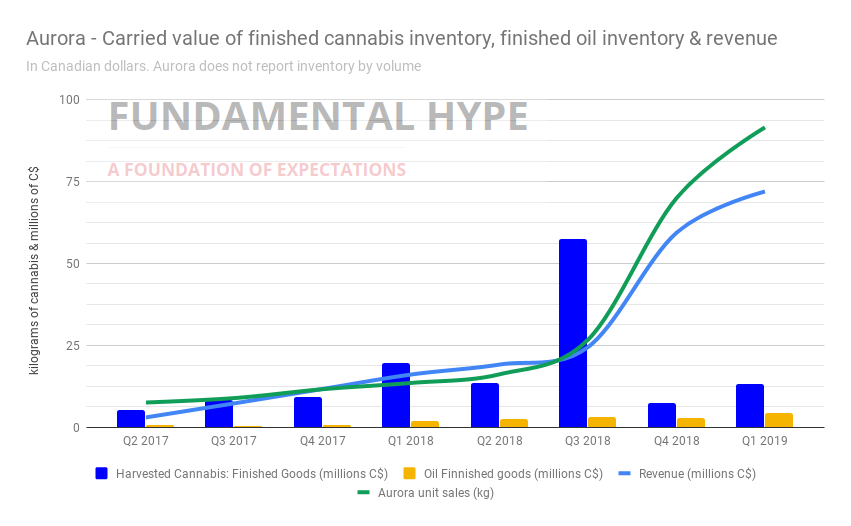 Aurora doesn’t track inventory by weight, so we have to make do with the book value of their finished goods. When I drew this up last quarter, the relative difference between the Q3 and Q4 inventory jumped right out. It looked like Aurora would have to come up with a lot more outsourcing in Q1 if they were going to beat the Q4 sales number. But…

It’s hard to say if Aurora is the only company supplementing their production with flower bought wholesale, or if they’re just the only ones being honest about it. It isn’t something they advertise, but they’ve been breaking it out since 2017, and we do appreciate that. In Q1, the re-sold flower fell both as a total and as a percentage of their total sales. Between that and a bump in the harvest number, ACB is starting to look like a company whose ambitious cultivation builds are starting to work out, but they’re too talented an operator for us to say for sure. 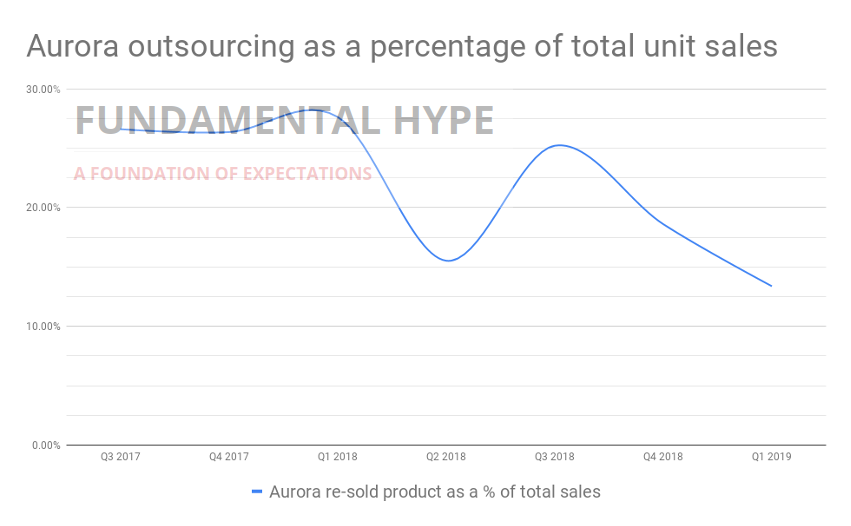 Aurora bought Whistler medical in an all-stock deal January, and there’s no telling how much of the production bump is Whistler capacity, or how much of the drop in outsourcing is product that they would have been buying wholesale from Whistler if they hadn’t just bought the whole enterprise. Aurora is proud of their production numbers, but we’ve been observing long enough to know not to trust a production number that broad. Not all flower is created equally, and the only way to tell if it’ll sell is to sell it. Sales figures are what matter here.

But those differences only really matter to those of us who obsess over spreadsheets and have a tendency to over-think stuff. To the market, this company is producing more weed and more revenue every quarter, and they’re doing whatever it takes to keep that up.

The story told by these charts is one of a surfer that is deadly serious about catching this next wave. Waxed up on the right gear and ready to hang round in the sun until the swell comes. They’ll buy any other surfer in the water who has any chops and put them on Team Aurora just to get their spot in the lineup. They’ve even done a deal with the resident shark.

Aurora’s contemporary Canopy Growth Corp. (TSX:WEED)(NYSE:CGC) got everyone’s attention by doing a deal for an option on aggressive and questionable US MSO Acreage Holdings (CSE:ACRG.U). That fine stunt amounted to Canopy spending $300M to telegraph to the market that they’re in on US growth. It’s the type of thing that needs to be done when a multi-billion dollar venture co lives and dies by its stock price.

Hiring Trian Partners founder Nelson Peltz as a strategic advisor is Aurora’s way of giving the market a similar sort of message. Similar, but not the same. Pletz is a shark. The activist investor is known to wage proxy battles for control blocks of large US consumer goods companies like Procter & Gamble and Kraft Foods. For an option to buy 19.9M shares of ACB at $10.34 (vesting in tranches over 4 years), Aurora buys themselves Peltz’s consumer goods connections and street cred, while keeping him out of striking distance of the board of directors. Now when Canopy tries to do a hostile takeover of the DEA through an insurance scam or whatever, and the street asks why Aurora doesn’t do something similar, they can just say that their advisory board looked into it, but it wasn’t for them.

Aurora’s place in the plot

Gunslingers get shot, sure, but the ones who stick around are the ones who limit the exposure of their vitals. Aurora’s heart and lungs are the way they’re perceived by the investment community at large. That perception is fickle, and it’s prone to relativism. Aurora will forever be weighed against Canopy, Tilray (NASDAQ:TLRY) and Aphria (TSX:APHA)(NYSE:APHA), and the market will change its mind about which of them is a better prospect from moment to moment. ACB is setting themselves up to be perceived in one of those moments as consistent; as a company that lives up to the expectations they’ve set for themselves.

(For the terms on the company’s deal with Peltz, please see the Aurora MD&A p.21)