Fundamental Hype took particular delight in covering our Canopy short yesterday morning as the final quarter of one of the greatest stock promotions in Canadian history was forced to show all of its operational warts.

It is increasingly apparent that the Canopy Growth Corp. (TSX:WEED)(NYSE:CGC) run by Bruce Linton was a company built to turn capital’s thirst for the high margin and high volume potential in a nationwide legal marijuana business into a valuable publicly traded equity. The prudent thing to do with a $20 billion valuation and $4 B in cash would be to focus on building an operating business, but where’s the fun in that? Once a company taps into that kind of stock market success, the tendency is to push it as far as possible.

The sugar high has to wear off some time, though, and controlling WEED shareholder Constellation Brands (NYSE:STZ) most assuredly knew what it was doing when it kicked out the life of the party, firing former CEO Linton in July. There’s no sense taking the risk that this party might get flared back up again until after they get a chance to clean up a bit, fix the stereo and the toilets, find out whose goats those are in the living room, and fish that car out of the pool.

Hole in the net 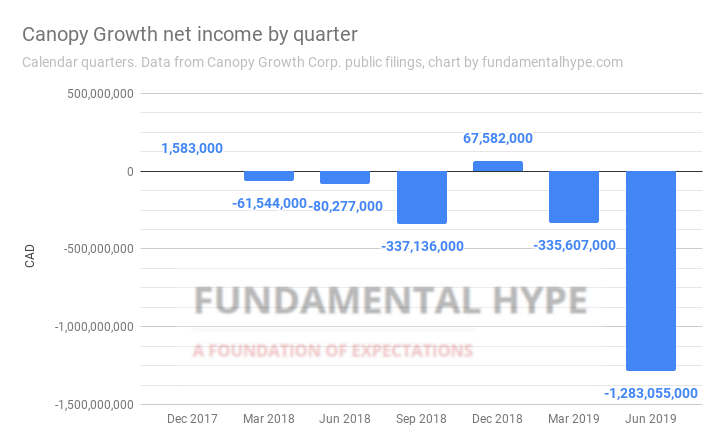 The Deep Dive has the best explanation of Canopy’s $3.70/share on-paper loss caused by the re-structuring of Constellation’s warrants to facilitate the deal Canopy did for an option on Acreage Holdings (CSE:ACRG.u) back in April. In brief, a $1.5 billion discount on Constellation’s way-out-of-the-money warrants ended up having to be accounted for as an equity charge and – as the most likely financier of the cleaning up of the mess they bought – Constellation didn’t act very worried about what a charge like that might do to the share price.

Canopy did not beat last quarter’s unit sales or cannabis revenue figures by enough to justify their growing glut of inventory. With no reasonable demand shortage or channel choke, questions about the quality of this inventory are growing louder. Fundamental Hype has written at length about our doubts that this coming October’s “legalization 2.0” of edibles and extracts will create market sufficient for Canopy to unload all of this low grade product. If the quality of this inventory isn’t dramatically better than last quarter’s, keeping those licensed facilities dark might be the move; at least it avoids a future write down. Naturally, “the TGOD method” of not growing cannabis in licensed space is notoriously bad for unit sales. 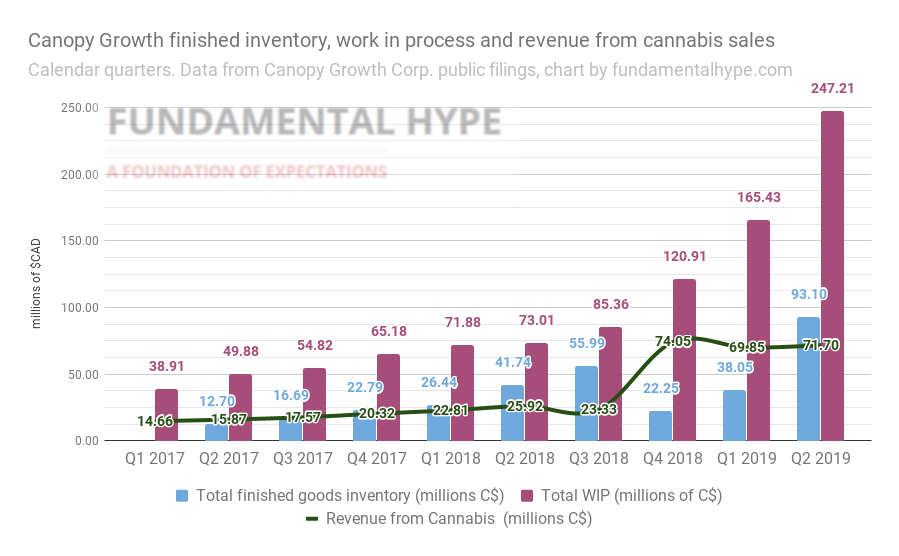 A look at Canopy’s inventory by tier shows inventory classified as a work-in-process growing quickly, and widening its gap with the inventory WEED classifies as finished goods at a far greater pace than their revenue or unit sales are growing.

Canopy quit telling shareholders the weight of its inventory, but they have to tell Health Canada, who passes it along lumped in with everyone else’s. The Health Canada data shows a far bigger gap between finished and unfinished flower inventory… 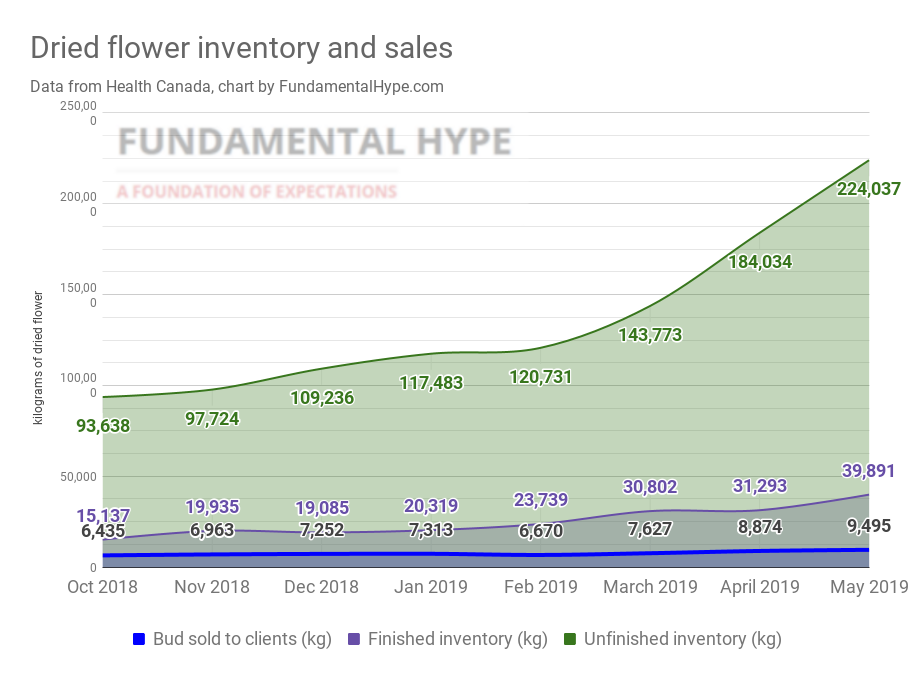 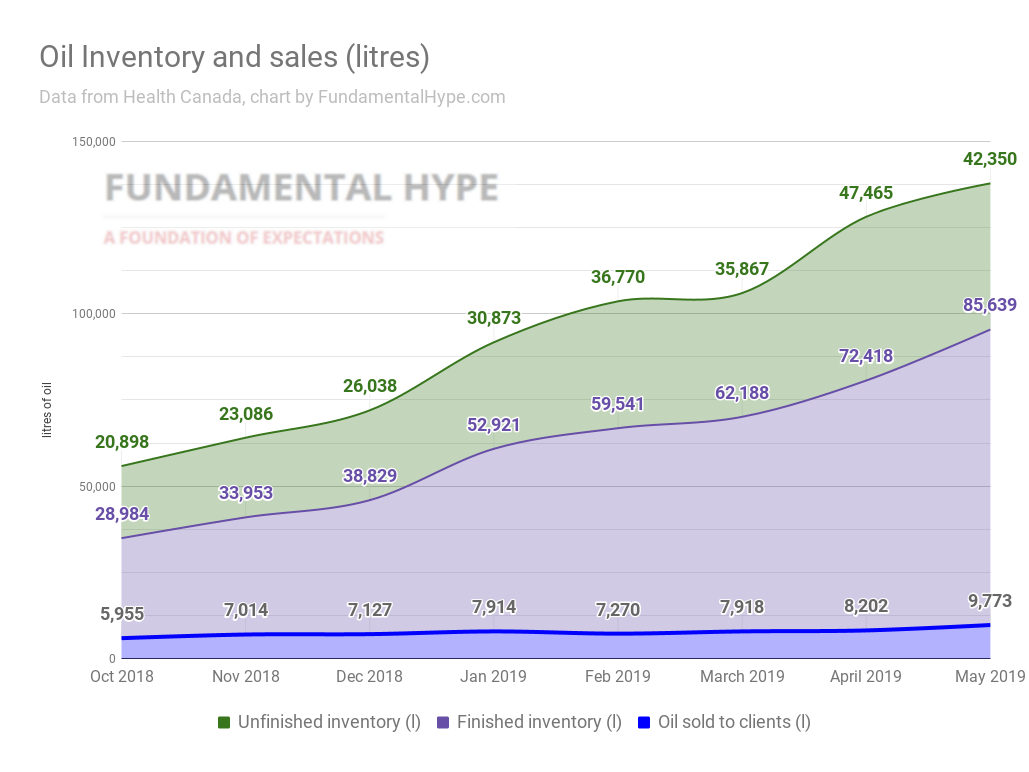 …than the one between finished and unfinished oil inventory, indicating that the nation’s unfinished inventory is mostly flower that doesn’t make the grade as a consumer smokable, and will be finished into extracts if it’s finished at all. Canopy booked an $8 million revenue contingency on their gelcap sales to allow for future returns this quarter, and that may well be a look forward into what this Canadian consumer market thinks of orally ingested cannabis.

The Canopy MD&A made it sound like the dark licenses were being phased back in on harvest cycles. Presumably, they cost more to operate when they’re growing weed than when they aren’t, so whatever they produce had better be good and saleable if it’s to bump this margin, and it’s about time we got around to that.

There are problems, sure, but they’re all on the margin

Canopy’s company-wide gross margin fell to 13% this quarter from 16% last quarter, and there’s no getting around the fact that those are terrible numbers. Canopy’s margin has been central to Fundamental Hype’s ridicule of pretend analyst and Minister of Information at Grizzle Media Scott Willis. Willis is the author of a quarterly misdirection called a “cannabis scorecard,” including a chart of Canadian LPs’ “gross margin per gram” which, for Canopy, is an impossible figure. 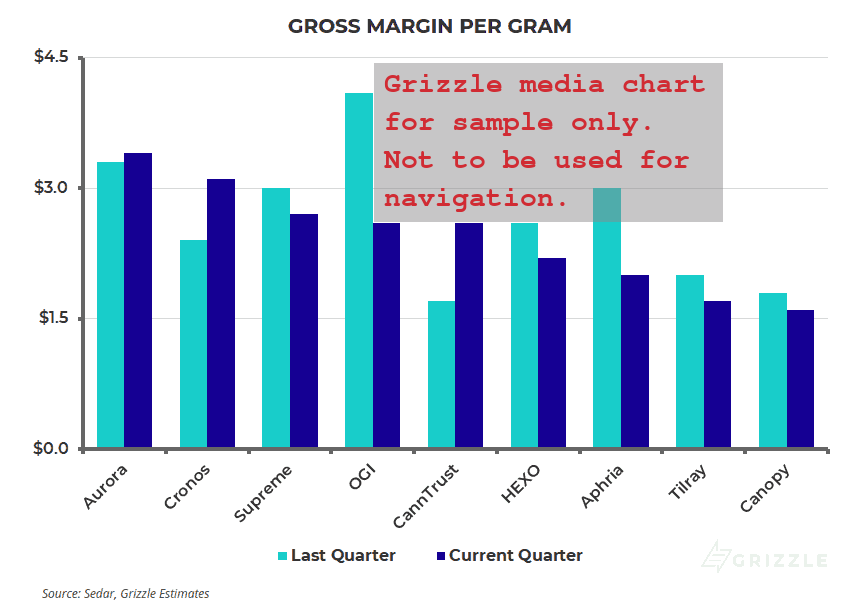 For the second quarter in a row, Canopy gave us a means of breaking out their cannabis revenue, but not their cannabis costs. Pressed on how he arrived at the March margin per gram number, Willis said that he used the figure for production costs expensed to cost of sales, and divided it by the grams sold. That figure almost certainly includes costs associated with non-cannabis inventory, because it’s greater than Canopy’s revenue from cannabis, and subtracting it from Canopy’s cannabis revenue produces a figure that indicates Canopy operated at a negative margin.

The “sensitivity analysis” in the summer edition of the scorecard put Emerald Health Sciences (TSX.V:EMH) in first place for “upside,” apparently taking these companies’ production promises as gospel, and not handicapping any “sensitivity,” to their demonstrated ability to grow cannabis. EMH sold 435 kilos in Q1. Second place The Green Organic Dutchman (TSX:TGOD) sold no cannabis in Q1, their first $18,000 of commercial cannabis sales having been reported in their recently published Q2 financials. TGOD doesn’t say how many grams that represents. No word yet on whether or not the ($18,000) gross loss that it produced will bump them down a few notches on Grizzle’s fall scorecard.

Whether Canopy ever ends up giving the market the straight goods on their cannabis margin or not, there’s no denying the fact that the largest Canadian cannabis company, with the largest footprint in Canada, is having trouble producing cannabis at a decent or even acceptable margin. In that context it’s a turnaround project, and whether management wants to acknowledge that or not, it isn’t likely to be healthy for this inflated equity. The short position that we opened in July and closed yesterday consisted of puts expiring today. We expect to be opening up a fresh short with a lower price target, betting that nobody in Smith Falls (or Victor, NY) is in any special hurry to keep this airborne pig from losing altitude. 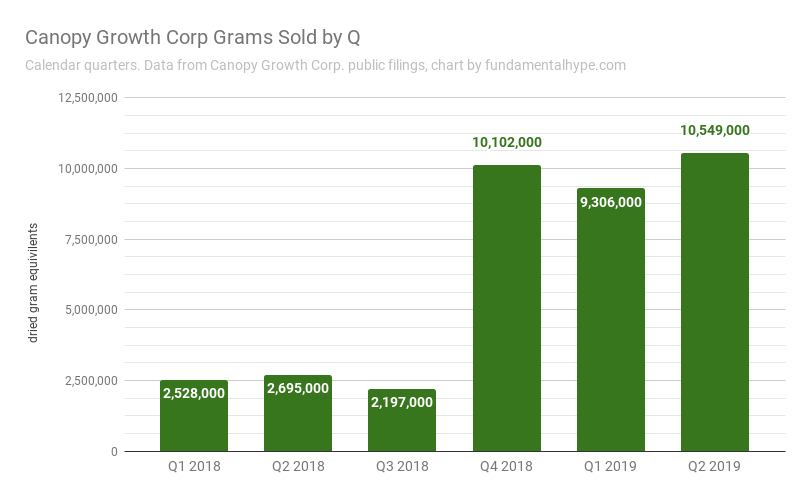 Fundamental Hype was not paid a fee of any kind for this post. We have no position in any of the equities mentioned, but are considering another short position in Canopy Growth Corp. soon.