Before last month’s Great Canadian Retail Marijuana Roll Out, I could go buy some weed at a shop down the block from my house. The shop has since been boarded up.

Now, the goods have to come from provincially licensed suppliers and, by all accounts, the LPs can’t keep the province supplied with enough product to displace a black market that has been thriving since… well… since the first time someone figured out there was money to be made selling pot.

We were able to scrape the catalog data from the provincial stores of BC, Ontario, Newfoundland and PEI and use it to make a representative data set that gives us an idea of the various LPs’ market-shares and what percentage of the products that each LP has promised to stock they’re able to actually stock. Those four provincial sales portals represent the legal rec-weed available to 53.6% of Canadians by population, so it’s fair to consider it a representative sample for the purposes of analysis. We were unable to scrape Alberta or Quebec, but a cursory glance at Albertacannabis.org makes them look mostly sold out. 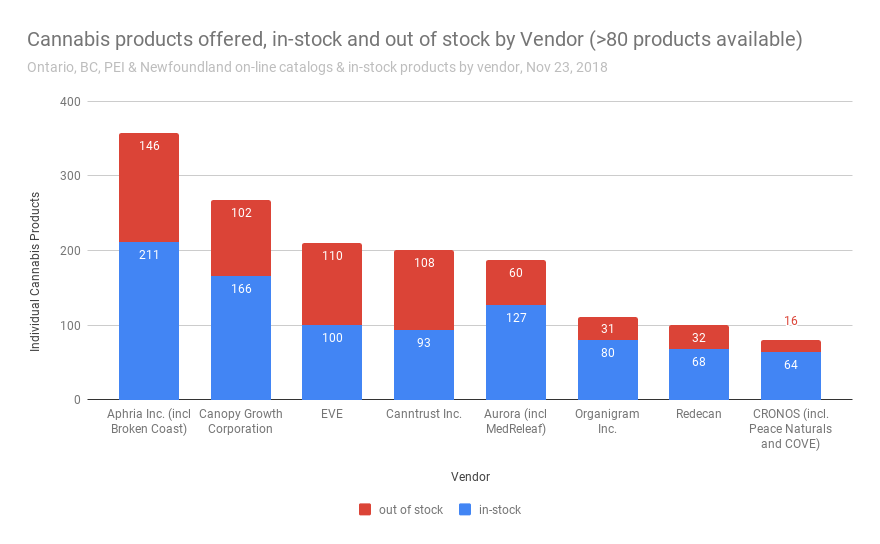 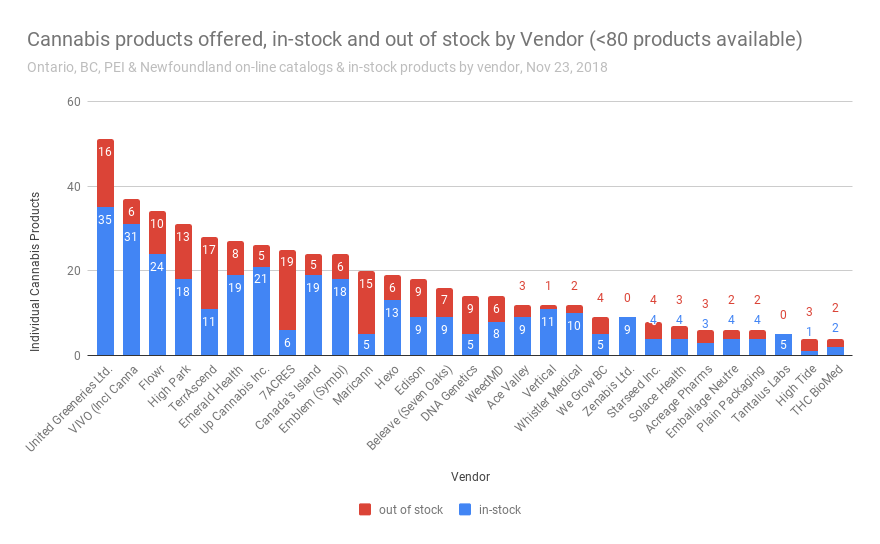 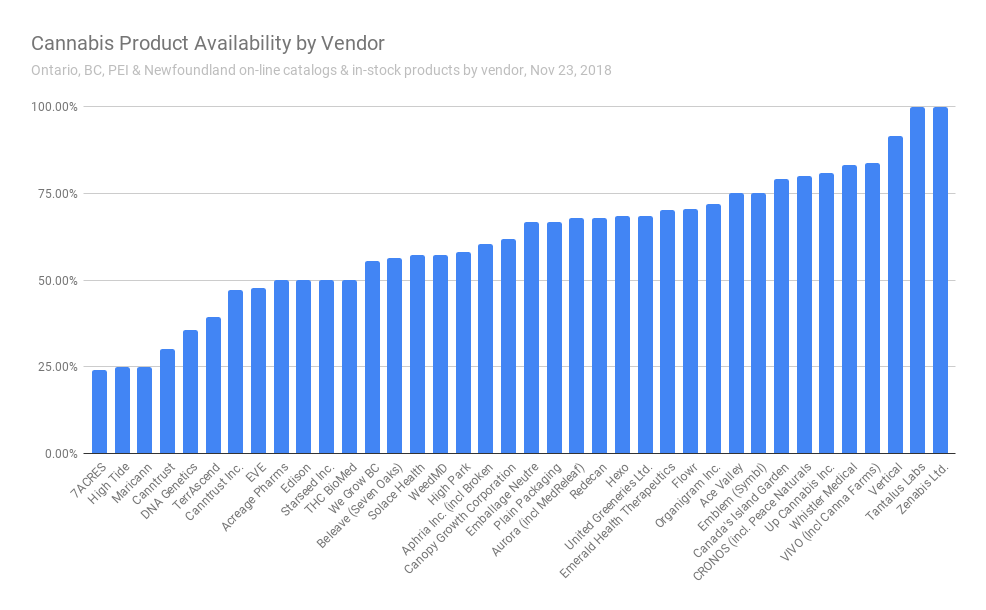 Excluding accessories, we were able to find 2,016 unique cannabis SKUs between the four sample sites, 1,233 of which were listed as in-stock and available for purchase. Removing SKUs that are quantity variations (ie – only counting in-stock eighths, grams, quarter, and pre-roll variations once for each strain) gives us 532 individual types of legal cannabis for sale in the sample. These numbers are a picture of this young market in its nascent state. Vendors make a show of having a variety of product available, but not yet being able to stock those products. We don’t have the data to tell which of these products were once available but have since sold out, and which ones have yet to be stocked at all, but by all accounts this stuff sells. Fundamental Hype R&D is working on a rolling scrape that will tell more about the volume of each individual product being moved (maybe). A lack of product in the online stores makes it reasonable to extrapolate that the provinces don’t yet have the product to supply storefront dispensaries. And, since few people want to sit behind a counter and sell illegal weed, the storefront by my house closed down.

Online, nobody is quite that bashful. The reddit forums for un-licensed mail order marijuana product discussion and pictures are about the same size as the ones for legal rec pics and appear to have a decent amount of user crossover, which makes sense. The unlicensed sites also trade in product types that the LPs aren’t yet able to provide, like edibles. As far as shopping experience goes, black market mail order sites don’t have data-rich catalogs that list the manufacturers and skus, and give a detailed breakdown of the terpenes or a tricomb profile.  They mostly just show pictures of fat nugs with cool names for cheap. They’re telling their users “You want this, right? Yes you do.”

Can the LPs compete on quality?

Reviews of legal weed have been mixed. While certain LPs have clearly distinguished themselves (shout out Tantalus Labs!), the industry as a whole has a long way to go before it’s producing quality with any consistency. And these heads are relentless. Have a read of the reddit forums if you want to keep up with it, but they know what they want and aren’t afraid to lay into sub-standard product.

Yup. Looked nice, smelled nice, smoked poorly. They are doing many things right, but improvement is needed for it to be enjoyable smoke. Of the 25 I reviewed, none would qualify for the top 100 joints I have smoked this year. 7 Acres Wappa was the best by far, but still… — Travis Lane (@BeardedGreenly) December 4, 2018

Investors who care to follow along and try to pick an LP who’s going to take over on quality may want to follow Travis Lane of the BC Indy Cannabis Association on twitter. But, as an industry, legal weed has to find a way to displace illegal weed if it’s going to end up in the black any time soon. If neither price or quality end up being their edge, Canada might see a new kind of drug war.

No post on e-retail would be complete without them

Namaste Technologies, which continues to be Fundamental Hype’s VERY favorite Cannabis stock promotion, is designed to live and die by it’s ability to sell Cannabis products to Canadians through e-retail portals. They have designs on Australia and the UK, but no licenses there yet. Like any other Licensed Producer, Namaste subsidiary Cannmart is only allowed to sell cannabis to Canadians with a prescription, and to the provincial distributors. Since Cannmart doesn’t grow any product – only buys it from other LPs, who the Provinces can buy it from themselves – that only leaves Canadians with medical marijuana prescriptions.

Compared to the provincial portals, the Cannmart catalog looks pretty thin. Curiously, they don’t carry pictures of the product. They presently list 15 unique cannabis SKUS, and one wonders why anyone would go through the trouble of getting a prescription when the same stuff is available through the provincial LP for the same price, never mind the fact that something just as good or better is available from black market sites for even less. Just because Namaste is a stock hustle doesn’t mean management doesn’t understand the business they purport to be in. They bought the largest unlicensed seller by traffic -buds2go.ca – on Nov. 21st and featured the company founders on their livestream 2 weeks ago. Budz2go.ca removed all sales infrastructure following the transactions, the plan being to fold the high-traffic domain into Cannmart’s license to sell. It’s unclear how long that traffic is going to hold up in a period where visitors can’t buy weed.

Eventually, we’ll all be dust

A comparison of next quarter’s sales numbers to the Q3 numbers, when LP sales were 100% to patients and to each other, are going to show us what the advent of retail really means for the Canadian marijuana market. It will also show us how equipped the companies are to keep up with demand. Once we run into a slack in demand, look for a crackdown on unlicensed sites. Ultimately, keeping score in the Canadian Retail market may amount to busy work. Deloitte projects the sum total of all Cannabis revenue in 2019 (medical + rec) to come in just over $7B. While we expect the Deloitte estimate is (AHEM!) high, the $70 billion in aggregate market cap currently in Canadian Cannabis companies isn’t there because it wants to capture that revenue. Not even accounting for bubble over-heat. Investors are treating Canada as a staging ground for capital and talent. It’s the farm league, where players stay limber and work on their game, waiting for the US Government to cut the ribbon and open up the big leagues.

Subscribers get new posts as soon as they drop
About Braden Maccke 72 Articles
Founder and Editor in Chief at Fundamental Hype, a blog about venture stage finance and the media that supports it.