In the perennial ritual that has become Potco earnings season, Moncton, NB based Organigram Holdings Inc. (TSX.V:OGI) and Leamington-based Aphria Inc. (TSX:APHA)(NYSE:APHA), the two cultivator class Canadian LPs who have November year ends, reported their earnings Monday. The market immediately saw its shadow, knocked Aphria down -14% on the news to $11.50, and OGI down to -7% to $8.44, sending a clear, cranky message that it had had enough with the growth-to-come story from the legal pot boom. In the moment, the pot trade was off.

But those prices printed a whole 24 hours ago. Since then, Canopy Growth Corp. (TSX:WEED)(NYSE:CGC) CEO and De Facto pope of this mutant freak of a venture capital monster, forecast that his company will generate $1 billion in revenue during its next fiscal year, catalyzing a near term turnaround in the sector with the familiar promise of a grand future where money grows on trees.

The market reactions yesterday and today to Aphria and Organigram’s respective earnings releases make interesting case studies for different reasons. We’re going to start with OGI today, and expect to follow up with a look at APHA shortly.

Tale of the tape

Regular readers know that we consider marijuana cultivators’ de-risking curve to run on a direct parallel with the amount of sellable marijuana they can produce, and OGI didn’t disappoint us. The Moncton facility pushed out 130% growth in sales volume, moving 4,987 kg of dried flower equivalent; nearly TWICE what Aph did over the same period – at a 60% margin. That production generated $26 million in revenue, with which OGI delivered an on-paper loss of ($6.3M), ($8M) of which was fair value adjustments to biological assets, so it isn’t unreasonable to count this as a cash-positive quarter for OGI, and that’s WITHOUT getting cute, pulling out select depreciation, stock-based compensation and other paper expenses that management often tries to convince us don’t matter, but actually do.

This OGI quarterly makes a great case for the company being the best operator in the country. They’re certainly the one getting the most out of their footprint. The outward facing presentation of OGI’s investor materials has improved as much as their operations. These reports break down the revenue by segments, and give it to us in rich, full color charts. A casual read, which is what most people who actually crack the statements give it, leaves the impression of a company who is constantly tightening the lines, successfully sourcing the staff they need, and generally moving in the right direction. Last quarter’s market performance allowed for them to convert the outstanding notes, the balance sheet is sound with $63 million in cash and only $10M in debt… so how did great earnings knock this down a peg? What gives?

Stuck in the middle

TSX.V listed Organigram, which does $1.2 million worth of trading volume on an average day, occupies a funny middle spot in the pot universe. It’s certainly too small to get the attention of the large institutional traders and funds who traffic in Canopy, Aphria and Aurora, and lost the attention of the growth-junkie crowd to heavily-touted next-big-things coming out of the US MSO space. OGI is presently last to the trough when it comes to institutional buying in its class of investor, if only by virtue of the fact that there are larger names with more exposure to the US market. In short, they’ve got a bit of growth to do yet before their grow-dope-and-sell-it approach takes OGI where they belong.

Doubtful that this factored in to the performance on Earnings day, but OGI gave us a rare new reporting metric this quarter, publishing for the first time their harvest for this quarter and last. LPs giving us new production and inventory metrics runs against the trend of them taking them away. 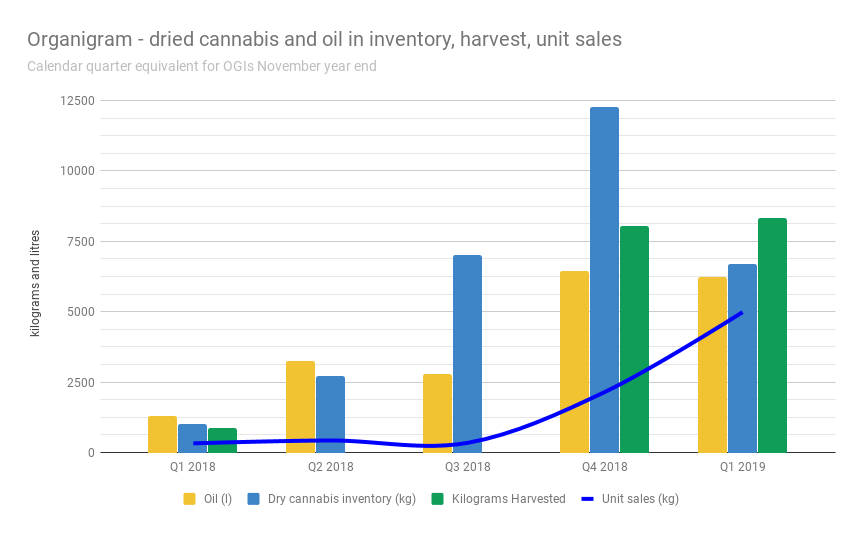 After we charted it all up, it looked like a case for the current cultivation and processing operations having become optimised. OGI is scheduled to bring another 93,000 square feet on line this month, and another 152,000 square feet by the fall. This will take time to optimize, just like any other indoor garden. It’s reasonable that it will take less time than most, a fully optimized operation with full staff and management existing next door.

The epitome of public (company) enemy

OGI hasn’t been without controversy. CEO Greg Engel earned himself a few dirty looks from the growing community when he suggested back in March that the government ought too be doing more to shut down the underground cannabis trade. He later clarified to Solomon Israel over at The Leaf News that he wasn’t after a modern reboot of the drug war, possibly in response to the pot community clowning on him and his corporate McDope.

Inimitable cannabis reviewer pancakenap opened up an OGI pre-roll on March 22nd to find a great deal of seeds and stems, prompting a chorus of righteous wise crackers on Reddit and elsewhere to tell Engel that he ought to try improving his play instead of crying to the ref. Fundamental Hype likes to use r/recpics for a look at what users are getting in the mail, but always go to pancakenap for the straight dope. The guy knows his trade, gives everything a fair shot, and sticks to a just-the-facts philosophy that somehow brings objectivity to something inherently subjective. Pancakenap’s reviews have consistently put OGI product in categories ranging from mediocre to bad, but it should be noted that pancakenap is a head with discerning taste. In this market, at the stores, there’s no arguing with the fact that this product is selling to the public.

“…you alone, the consumer, cast your votes with your dollars.”

As we mentioned, no stock is immune to the direction of the larger marijuana sector. The early move on earnings news made the sector look like it wanted to change its mind, but Linton’s comments today show that, as a whole, investors are still choosing to believe in magic. Organigram is operationally excellent, and a lot further down the de-risking curve than many of its peers. Marketwatch’s Max Cherney – who might be the only reporter who reads more marijuana company filings that I do – pointed out to his twitter followers that OGI had about half the market cap of Aphria, despite having double the unit sales, and is moving more product than anyone but Canopy.

Another thing to note is that Organigram sold more recreational weed than anyone else aside from Canopy Growth $cgc $weed.

Max may be averaging several periods with that tally. We make OGI’s 5 million gram Q1 for third in all-time sales quarters, behind Aurora Cannabis’ (TSX:ACB)(NYSE:ACB) 7 million grams last quarter, though some of that Aurora product was purchased on the wholesale market and re-sold.

Fundamental Hype is old fashioned and sentimental, believe that good businesses have their equities come around to catch up with their value eventually. We expect OGI to outperform the broader marijuana sector, and its cultivator class peers. We will be adding to our position on dips.