Fundamental Hype was live on location for the Vancouver 420 rally that cluttered your social media feed for the past three weeks with annoying opinions about civic procedure and civil disobedience. We’ve returned to bring our readers total coverage of all the parts that really matter, from the epicenter of the underground.

Fundamental Hype is aggressively apolitical and totally disinterested in the particulars of whether or not the Vancouver 420 protest rally featuring Cypress Hill was legal, appropriate, exploiting a constitutional right to free assembly for commercial purposes, or a necessary exertion of community ownership over a culture being rapidly commercialized. Missing out on a free Cypress Hill show right down the block form headquarters would be downright unprofessional.


There is nobody under 40 who hasn’t bumped a Cypress Hill track and loved it. It sounds like a house party and goes with almost anything. Their cameo on The Simpsons might be the reason many even know there IS a London Symphony Orchestra. The South Gate California group’s association with marijuana is a holdover from a time when that sort of thing made rappers dangerous parts of a counterculture. Unlike many of their contemporaries, it was never what carried them.

Cypress Hill earned every bit of their commercial appeal with a mastery of their art; a unique and contagious kind of rap, with two complimenting unique and distinctive types of vocal delivery. The beats are rich complex and meaningful – put together with care and imagination. In 1991, looping a do-wop classic like “Duke of Earl” and putting it behind a gangster banger like “Hand on the Pump” was the sort of thing that drove people with a nostalgic love for the soulful Gene Chandler classic mad. They wanted these damned kids off their lawn! And it was perfect. Cypress Hill thrived on rebellion and authenticity. Not a lot of variety, but they always knew what they were, and focused on doing what they did best.

It was everything we know and love. Deep cuts from their debut self titled album and from Black Sunday, along with all of your favorites. They played for about an hour to literally everyone in the area who wasn’t too old, or bothered by crowds. It all moved a crowd that was transfixed (if not all that animated), and happy to puff away on whatever was being handed around, Rap Superstars in their own minds.

Cypress Hill delivered at 420, where stoned was the way of the walk, and the informal economy occupied the space that Canadian Licensed Marijuana Producers aren’t yet ready to fill. Tented festival booths with simple tables sold all manner of marijuana and marijuana product to an absolutely jam-packed standing-room-only crowd of kids looking for a party.

Here, there was no supply shortage. From big bags of trim to jars full of kind bud of all quality. There were all manner of edibles – gummies, junk food – and prices that made the BC Cannabis store look like a sit down restaurant where the silverware comes in a place setting instead of a rolled up napkin. 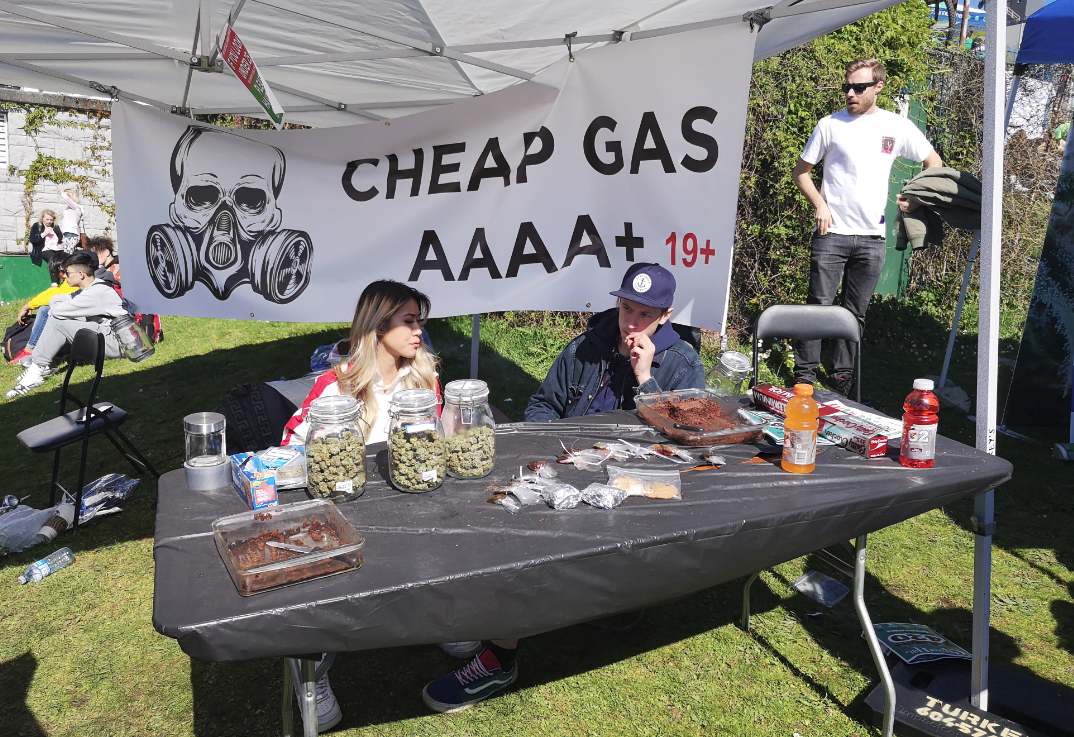 When I say that quality was all over the map, I mean it. From big bags of schwaggy trim for $5 to chrome plated chronic for the hardcore heads, sold by someone happy to talk endlessly to whoever will listen about different strains they use to create custom trichomb blends for unique terpene profiles up and down the value chain, like they were one of these insufferable handlebar mustached craft beer guys, or Dan Sutton. 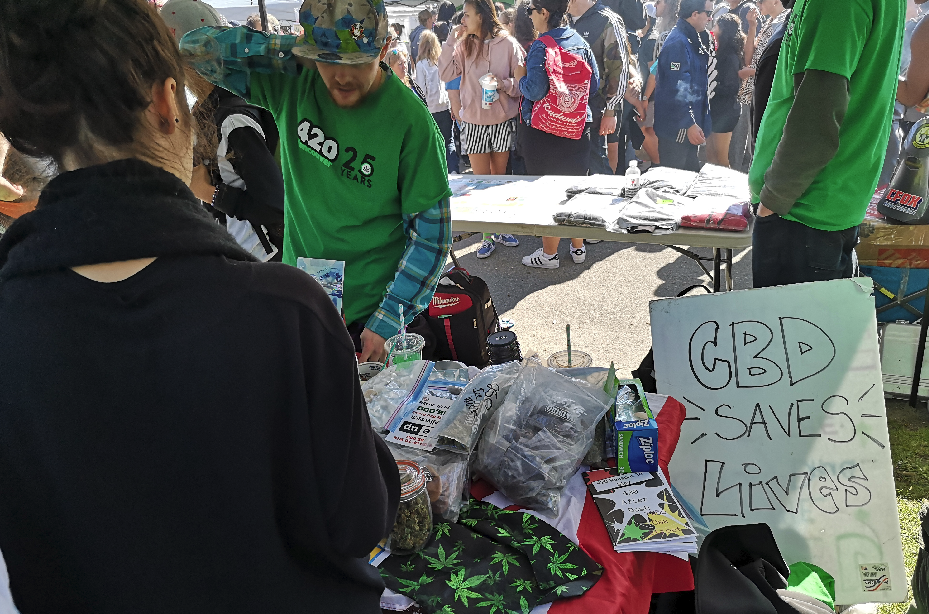 The going rate for pre-rolls and gummies was 2 for $5 at stands but, true to form, rally volunteers walked through the crowd and tossed what had to be two pounds worth of cones out to the crowd at 4:20 pm. Nobody seemed too concerned about their lineage or origin.

Protest organizers who have been at this for decades being unwilling to cede precedent to the city permitting department is unsurprising. This event represents the biggest marijuana retail opportunity in Canada, and it isn’t even close. It’s like selling weed at a Cypress Hill concert. The local underground marijuana community would much prefer to commercialize this prime territory on their own terms than have it worked into the provincial cannabis system.

Can’t get high without that supply

At the moment, it isn’t an issue. That place would burn through a month of BC’s available retail supply in an afternoon if you let it, the volume being throttled only by price. It stands to reason that there will be an inflection point when The Man is truly set to take over cannabis sales at 420. Absent a great volume of legal supply, the formal and informal markets for dried flower don’t exist in any actual tension. Legal producers are able to finance their business through the capital markets, and the informal producers will just keep on doing what they’ve been doing since always.

But dried flower isn’t likely to remain the only front of conflict. The roll-out of edibles and extracts will likely represent the first bit of tension between those two markets, licensed producers surely wanting to be able to establish some products in a market segment capable of soaking up all of the unsmokeable bud that they’ve been stacking.

Doing the right thing, just not at the right pace

The work of Peruvian Economist Herman de Soto is typically applied to developing economies where an outsized portion of the economic activity taking place underground prevents a country’s economy from developing properly and traditionally. de Soto advocates for the moving of underground economic activity into the formal economy through the granting of property rights. Given the ability to gain credit, raise capital, transfer equity, etc., that activity is able to grow and flourish.

Canadian Legalization is a rare instance of DeSoto’s work being applied to a developed economy. True to form, The Canadian Government has created a system of checks and licenses that ensures a highly secure system of medical grade facilities produces product free of impurities and have no ties to organized crime or international money laundering. The process occurs on a time-scale that seems geological next to the ones that we’re used to dealing with in capital markets and in marketing. The legal market presently producing nowhere-near-enough dried flower to supply consumers is presently being supplied by 173 facilities, and it may take them a while yet to catch up, because the marijuana cultivation bell curve is atypical; fat on the left hand side.

This chart plots the total sales reported by Washington State marijuana cultivators by individual license from June 2014, when marijuana was legalized, though Jan 2017 when they stopped publishing enough data to keep track of it this way. We would have preferred to track it by weight, but dollars were the only way to break it down by license.

It was no use plotting this on a pie chart: only 5 of 426 licenses were producing more than $1 million dollars in revenue. Only 30 produced $500,000 over the two and a half years. Some of these facilities are obviously bigger than others, but controlling for the size of the license doesn’t change the shape of this graph. Washington State also licenses processors and retailers; other parts of the value chain with sales of their own, both of which are dependent upon the cultivation phase.

Some more current data would show us how this split fattened out but, as we mentioned, the Washington State liquor and cannabis board doesn’t give us what we want the same way Cypress Hill does. Today, the board lists 1400 different producer licenses, but doesn’t publish their individual sales.

Growing good product at a commercial scale isn’t something that is easy to achieve and, if Washington State is any indication, 173 total Health Canada licensed facilities aren’t going to be able to push enough product to displace an abundance of weed so great that Cypress Hill comes to Vancouver to do a free show.